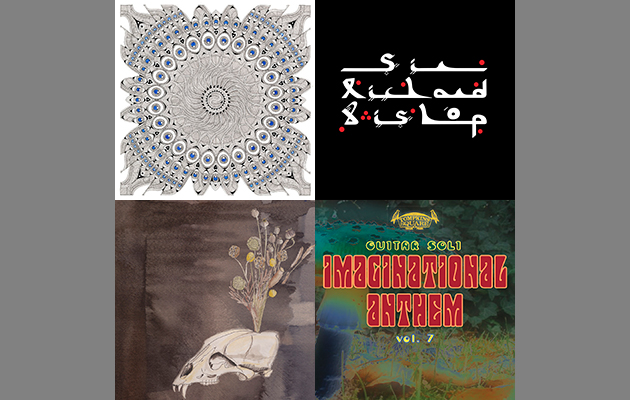 I spent yesterday at home, working on a feature for the next issue of Uncut and worrying, as I suspect a few of you may have been, about secondary school places. Back in the office this morning, there was quite a glut of new music to play: the comeback album by one of my favourite hip hop acts, Cannibal Ox; the monstrous new Godspeed You! Black Emperor record, “Asunder, Sweet And Other Distress”; and something else that, once again, I’m forbidden to mention by name thanks to the brutal necessities of the Major Label Embargo.

There was also a long email from Dean McPhee, a Telecaster soloist from West Yorkshire who is something of an outlier among the current crop of guitar soli. I’d asked him a few questions about his serene new album, “Fatima’s Hand”, about how he thinks he relates to the bedraggled hordes of John Fahey acolytes that I write about most weeks. “While there are also some really great players who are carrying on the American Primitive/Takoma style of playing,” Dean wrote, “I tend to be more drawn to outsiders who are working in a more singular, unusual space, and I feel that’s an approach that I fit in with better.”

Michael Chapman is an obvious kindred spirit, and McPhee has played live with that questing Yorkshireman. In general, though, McPhee’s hermetic, electric folk meditations are closer in sound to those of Vini Reilly or, on the modestly ornate “Smoke And Mirrors”, Sir Richard Bishop. As on his 2011 debut, “Son Of The Black Peace”, a sort of desolate twang predominates. Horizons expand once, magnificently, for “Effigy Of Clay”, where delay moves McPhee toward the dappled vistas of Fripp & Eno’s “Evening Star”.

Bishop, meanwhile, has his own new album out right now, which is also worth investigating. Myths and quasi-mystical arcana have always clustered around Bishop and his old band, The Sun City Girls. The story appended to “Tangier Sessions” is less pranksterish and more plausible than most, involving a late 19th century guitar bought in a Geneva lutier’s shop, used for a week of inspirational sessions in a rooftop Tangiers apartment. The resulting album has fewer overt Middle Eastern influences than much of Bishop’s work (notably 2009’s “Freak Of Araby”), focusing instead on courtly improvisations that feel closer to the work of John Renbourn or, perhaps, Peter Walker’s flamenco studies. Mostly, though, “Tangiers Sessions” reasserts Bishop’s status as a wide-ranging guitar master, gently amused by any such assumptions of grandeur.

The “Imaginational Anthem” series of compilations on Tompkins Square has long documented the state of American Primitive guitar music; when Volume One was released in 2004, its collection of tracks by Fahey, his contemporaries and 21st Century followers seemed a noble but finite concept. Eleven years down the line, however, the series continues to locate wave after wave of new guitar soli: even for dedicated fans of this questing instrumental music, most of the names on the new instalment, Volume Seven, will be unfamiliar. Volume Seven mostly avoids straight-up Fahey acolytes (Christoph Bruhn and Dylan Golden Aycock being strong exceptions), showcasing players who favour delicate atmospheres over blues and folk extrapolations. A generally lovely listen, albeit one which maybe lacks the breakout stars – Jack Rose, Chris Forsyth, William Tyler – of previous volumes.

Finally, as with most months, Steve Gunn (another Imaginational alumnus) has a new record to savour. “Seasonal Hire” is a hook-up with Virginia’s reliably ornery Black Twig Pickers, that finds a common ground we might usefully term Psychedelic Appalachian. Gunn has collaborated with sundry Twigs before: “Dive For The Pearl” figured in sparser form on his 2014 duo album with frontman Mike Gangloff, while banjoist Nathan Bowles currently moonlights in Gunn’s road band. Old friendships contribute to the general good vibes, and an atmosphere that’s at once rambunctious and exploratory: “Trailways Ramble”, last attempted on Gunn’s 2013 solo set, Time Off, is a brackish highlight. Next up, in theory, is a duo album with his old Violators bandmate, Kurt Vile. I’ll let you know when that one shows up; first news may well check up on my Twitter feed: www.twitter.com/JohnRMulvey.