Last year, I spent a fair amount of time listening to a mighty blown-out Philadelphia band called Purling Hiss, whose mainman Mike Pollize was sprung from another excellent local band called the Birds Of Maya. 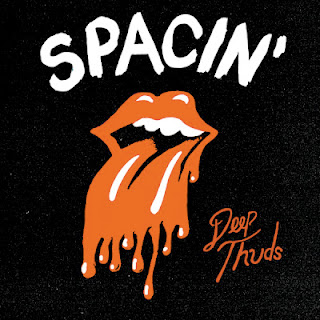 Last year, I spent a fair amount of time listening to a mighty blown-out Philadelphia band called Purling Hiss, whose mainman Mike Pollize was sprung from another excellent local band called the Birds Of Maya.

This week, I’ve got caught up with another moonlighting member of Birds Of Maya, Jason Killinger, who’s resurfaced with an amazing album called “Deep Thuds” under the name of Spacin’. The Richie Records/Testoster Tunes blurb for “Deep Thuds” sells it pretty perfectly: “. It’s five blasted anthems of basement motorik fuzz-rock and a couple of circular ambient explorations that’ll send ya’ searching for Visine and peanut butter cups.”

A slightly different way of putting it, maybe, is that Spacin’ moves in a very similar way to the best bits of Purling Hiss’ messy oeuvre (my old piece about them is here). The Comets On Fire-like noise jams aren’t so prevalent; for that sort of thing, try another fine new Richie/Testoster album, “Vengeance, Man” by King Blood, which I’ll try and write about soon.

Instead, Spacin’s songs mostly sound like kin to Purling Hiss’ more obviously tuneful stand-outs like “Run To The City” and “Been Teased”. References again would be Big Star, and Ariel Pink’s super-fuzzy early recreations of FM rock. Killinger’s key trick, though, is to graft a certain wasted variant of classic rock– check out their blood-drip mangling of the Stones’ tongue logo – onto the glazed mercury chug of the Velvets. The opener, “Empty Mind”, does this perfectly, unravelling into a jam that then morphs into one of those “circular ambient explorations”. This one is called “Some Future (Burger)”, and it’s a terrific kosmische afterburn, fractionally suggesting Ash Ra Tempel reborn as a Goner band.

The other ambientish thing is titled “Oh, Man”, a lo-fi Latino jam with, again, Kraut undertones, that occasionally sounds like Santana in a wardrobe. Not the most glowing recommendation in theory, perhaps, but it sounds terrific.

Crowning glory, though, is a song called “Sunshine No Shoes” in which all of Killinger’s whacked-out, melodic sensibilities casually crystallise into a blindingly great song. It’s available to download here for free, and I really can’t recommend it enough. Have a listen and, as is traditional, please let me know what you think.