Some more thoughts on Kate Bush and Alice Gerrard

On Sunday, Kate Bush inadvertently staged a one-woman assault on the British charts. This week, 11 records in the Official UK Albums Chart are by Bush – not bad, really, for a woman who has only really released nine new studio albums in the past 36 years. 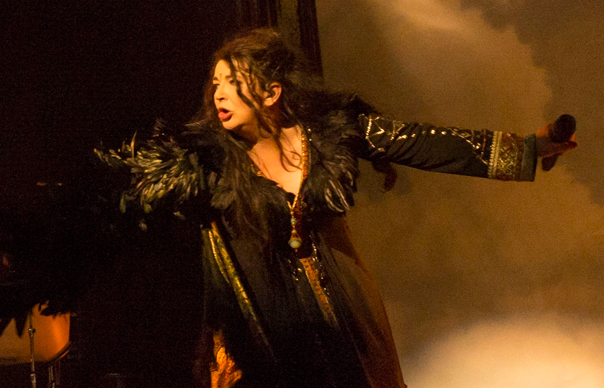 On Sunday, Kate Bush inadvertently staged a one-woman assault on the British charts. This week, 11 records in the Official UK Albums Chart are by Bush – not bad, really, for a woman who has only really released nine new studio albums in the past 36 years.

Apart from airlifting an unusual amount of decent music into the charts, the Bush invasion was also eloquent and gratifying proof that the wider world really did care about her comeback; that the blanket coverage was not merely an indulgence of besotted and fortunate media types of a certain age. In case you missed it last week, I was one of those fortunate media types of a certain age who saw Kate Bush’s Before The Dawn spectacle at Hammersmith Apollo last week: the media focus may have moved on, but the shows continue for a few weeks yet, and we’re very interested to hear your reports – please email me at uncut_feedback@ipcmedia.com and we’ll print a few of them in the next issue of Uncut.

In the meantime, here again is my review of the second Before The Dawn show, and a couple more good Uncut reads on Bush: “This girl is very, very tough…” The untold story of Kate Bush’s Hounds Of Love and Album By Album: Kate Bush’s closest collaborators talk us through her greatest records. That should keep you going.

Anyhow, for the past few weeks, I’ve been very taken with an album by another female singer making an unexpected comeback. Alice Gerrard is an 80-year-old bluegrass singer based in North Carolina, and, a few months ago, I was alerted to the fact that she was back in action by MC Taylor, the busy frontman of Hiss Golden Messenger, who’s produced her next album.

“She’s a riot, man, talk about a wanderer,” Taylor told me. “She’s in her 80s now, and she’s still going on tours and sleeping on people’s couches. She’s a pretty small lady, and she wears triple XL fleece sweatshirts and ripped up sweatpants and oversized Crocs. I’m like, ‘Alice, what? You’re dressed like a seven-year-old boy right now.’ She just doesn’t care. She’s an amazing person.”

In the 1960s and ’70s, Gerrard and her duetting accomplice Hazel Dickens (1935-2011) made a series of stark, striking folk recordings that were compiled on the aptly-titled 1996 comp, Pioneering Women Of Bluegrass. While Dickens sang high and forlorn, Gerrard (married at the time to Mike Seeger) was a deeper, darker, more austere presence. Listen, for instance, to her take on Bill Monroe’s “The One I Love Is Gone”, which transcends conventional country melancholy and moves into a more spectral zone.

It is this atmosphere which pervades the start of Gerrard’s new album, Follow The Music. The traditional “Bear Me Away” begins with a low viola drone, closer to John Cale than orthodox folk, and Gerrard incanting a dirge of unnerving potency. The intensity is sustained through the weird folk of Gerrard’s own “Strange Land” but, gradually, the album becomes warmer and more relaxed, if still somewhat gothic in tone. Gillian Welch is revealed as a strong descendant, while the brackish invention of the playing (by members of the extended Hiss Golden Messenger family, mostly) sometimes recalls the instrumental flights of fellow Piedmont adventurers the Black Twig Pickers.

Follow The Music was conceived by accident, when Taylor was chatting on the phone to Tompkins Square head Josh Rosenthal, just as Gerrard was paying one of her regular visits to scan pictures in Taylor’s office at Duke University, Durham, North Carolina (“She has the most insane fucking photo collection, like a photo of Clarence White backstage at a Byrds show in 1971”). Recorded in a barn, the prevailing vibes might appear homely and convivial. But it’s the gravity of these songs and timbres which are most resonant and enduring – the intimations of ancient doom that led Emmylou Harris to recently note, “She is the real deal with the right stuff. She hasn’t forgotten where country music came from.”