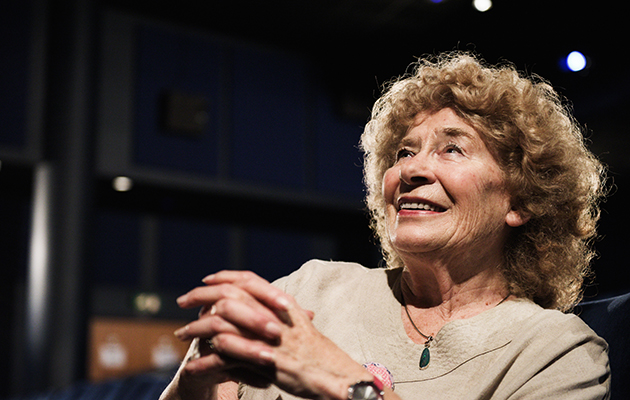 Originally published in Uncut’s May 2018 issue

“I probably did myself a favour by not struggling on with it too long,” says Shirley Collins, discussing her 38-year retirement, ended by the release of Lodestar in 2016. “Although I minded not being ‘Shirley Collins the singer’… but I’m that again now!”

To celebrate the publication of Collins’ new book, All In The Downs, and the release of the soundtrack to the recent film about her life, Uncut joins the garrulous Sussex-born folk singer, now 82, for a pot of Earl Grey at her picturesque cottage in Lewes. Up for discussion are nine of her finest albums, her journeys around America with Alan Lomax and the time Hendrix came for tea, as well her work with Davy Graham, various Fairport members and, of course, with her late sister Dolly.

“It’s all quite amazing that we came to make [2016’s] Lodestar,” she marvels. “And there’s another one that we’re going to record later this year. I’ve got the songs ready, and I think it’ll be better than Lodestar because my singing’s got stronger since I’ve been out on the road.”

This was recorded by Alan Lomax and Peter Kennedy in ’58, before Alan went back to the States in July. He and Peter recorded two albums’ worth of songs before he went – they were basically all the songs I knew at that time, a lot of them from Cecil Sharp’s English Folk-Songs For Schools. I knew some from Aunt Grace and Grandad, and the rest I had been finding when I first came to London, in the library at Cecil Sharp House. I was quite proud of the fact these songs had been recorded, but it was too soon, really – it wasn’t very good! We had an awful lot to get through in those sessions, so some of them were one-takes – and they do sound like it. In 1959 I went to America for nine months [with Alan Lomax]; it was incredible. Recording Mississippi Fred McDowell was one of the great days of my life. Just after five o’clock, Fred walked out of the wood into the clearing, in his dungarees – he’d been picking cotton all day. He sat on one of the stoops and started to play, and it was just incredible. The most electrifying sound I’d heard. At the end of the first song, “61 Highway”, Alan wrote the word “perfect” in his notebook, because it was.

[Producer] Austin John Marshall and I were married by this time. He loved jazz, but I hated it. One night he came home from a club and said, “I’ve seen this great guitar player – I think you and he could work together.” He explained that Davy played African and Indian riffs, and I thought, ‘I don’t think so…’ But Davy came up to the house and he was lovely. He played “She Moves Through The Fair”, and it was just extraordinary. It had all these African and Indian influences in it, but it made it more Irish in a way. I was completely bowled over. We started thinking about songs we could do, and the obvious ones were Appalachian ones like “Pretty Saro”; because of the modes, they had that Eastern sound. It was a thrill to do – though I was a bit scared of Davy, because he was very intellectual, always carrying a book about something that was above me, usually Eastern religions, of which I had no interest. And he took drugs, so you had to be slightly wary of him, yet he was a gentle and generous man. It was recorded at Abbey Road, with Davy and I perched on stools, which was never my favourite position for singing – and quite a distance apart! We played on TV, too. The producer said to me, “I thought you were supposed to be beautiful?” No, I never claimed that… And then he didn’t want “Reynardine”, so we did “House Of The Rising Sun” instead. I still feel annoyed to this day that we couldn’t do what we wanted to do!

SHIRLEY COLLINS
THE SWEET PRIMEROSES
TOPIC, 1967
The start of a fruitful collaboration with sister Dolly Collins and the flute organ, and the LP that established Collins’ signature style

I realised it probably couldn’t continue with Davy, because he was too tricky to work with. One time we were doing a concert north of London, so we met at King’s Cross, and he said he couldn’t travel on the same train as me for some reason. It was a really bad start to an evening’s gig, to wonder why. He was just in a different world. So I was sitting one evening in the house at Blackheath, and I got Folk Songs Of North America out, which was the last thing Alan Lomax produced before he went back to the States. I was leafing through it, and I saw there were some keyboard arrangements – so I went over to Dolly’s, and she played them on the piano. They were perfectly nice, but they didn’t enhance the songs. So I said, “Why don’t you write some arrangements?” She turned up a few days later with her first arrangement, for three French horns… “Dolly! How are we going to take three French horns to gigs?” So she went away and started on keyboard arrangements. They were so lovely to sing with, so right and appropriate. John and I used to go to rehearsals at the Early Music Centre in London – it was there that we heard the portative organ. I heard the first few notes and thought, ‘God, I’ve got to sing with that.’ So Dolly began to write for the flute organ. We never owned it, we always had to hire it – £120 a time. We used to go to Noel Mander’s organ factory in Bow and put it in the back of the estate car that Dolly’s husband had.