Saying the unsayable: Elvis Costello, ‘Tramp The Dirt Down’ and Margaret Thatcher

“To make true political music,” the great American critic Greil Marcus wrote nearly 25 years ago, “you have to say what decent people don’t want to hear; that’s something that people fit for satellite benefit concerts will never understand, and that Elvis Costello understood before anyone heard his name.” 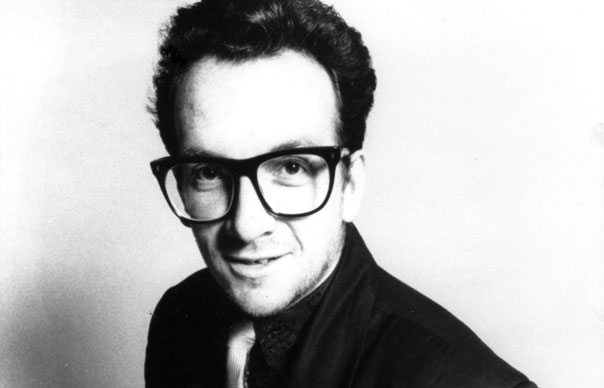 “To make true political music,” the great American critic Greil Marcus wrote nearly 25 years ago, “you have to say what decent people don’t want to hear; that’s something that people fit for satellite benefit concerts will never understand, and that Elvis Costello understood before anyone heard his name.”

Marcus was thinking specifically Elvis Costello’s “Tramp The Dirt Down”, from his 1989 album, Spike. The song, of course, is Costello’s furious indictment of Margaret Thatcher and the many ruinous things her Conservative government had done to Britain and its people, in which Costello venomously wishes the dragon dead and looks forward to dancing on her grave. The song is fuelled by the same righteous wrath that Dylan brought to “Masters Of War” – “I hope that you die and your death’ll come soon” – and on release caused grave offence, outrage in predictable quarters.

I first heard the song in March 1985, at a benefit for the National Union Of Miners at the Logan Hall in London, on the night that the union’s bitter year-long strike was finally called off, when it was as far as I knew at the time called “All She Thought Of Was Betrayal”. Yesterday, I was surprised to hear someone playing it in the Uncut office, unaware at the time that – ding dong! – the witch was dead.

Nearly 30 years on, the song will reflect the mood of many in the wake of Thatcher’s passing, which they will not mourn as much as celebrate, a lot of people as unforgiving still in their opinion of her as Costello was when he wrote it. Funnily enough, “Tramp The Dirt Down” has not yet been a featured part of the soundtrack to any of the television tributes to her that we have so far endured, and rogue MP George Galloway’s reference to it yesterday on Twitter has caused a noisy storm of protest from incensed Thatcher ultras. “Tramp the Dirt Down” was also very curiously absent from a round-up of songs about Thatcher compiled online by The Guardian, which perhaps was uncomfortable with a song that spoke so eloquently ill of the dead.

I have no idea how Costello would have received the news of Thatcher’s death yesterday, although I suspect little mourning was involved. But during an epic interview in Dublin not long after it appeared on Spike, I asked him about the song and the recent controversies it had provoked.

What does “Tramp the Dirt Down” achieve, what will it change?

“Nothing I can think of,” he said. “I honestly don’t think it will change anything. Like I said to one guy who asked a similar question, songs like that, they’re like tiny marker buoys. You know, ‘This is where the ship went down.’ The song’s not a party political broadcast, there’s no manifesto. It just says, ‘I’ll only be happy when this woman’s dead.’

“And some people no doubt might find that extreme. But it’s meant to be. I make no apology for that song. It’s an honest emotional response to events, and writing it was like casting out demons or something. And the song itself is the result of a form of madness, because when you get to that point of thinking these thoughts, actually wishing somebody dead, it really does become a form of madness. It’s a psychopathic thought. And it’s fucking disturbing to find it in your own head. But it would be cowardly not to express it. Because once it’s there, if you don’t get it out, it’s only going to come back and haunt you some more.

“I also think you have to remember that it’s not only her that the song is aimed at. It’s what she represents. The way she’s changed the way people value things. It’s like some kind of mass hypnosis she’s achieved. People are afraid to speak out. You know, one thing I thought I’d be asked when people heard it was whether I was saying it might’ve been a good thing if she’d died in the Brighton bombings. I don’t think so. It would have made things 10 times worse, because then she would have been a martyr. We would have had a dead queen. So really, in a profound sense, the song is hopeless. It’s a hopeless argument. Because I think it’s a hopeless situation. So, no, it’s not in a large, historical sense, going to change anything.

“But I think it does have maybe an individual effect. There’s always a chance it’ll sneak through somehow. Like, I sang it at a folk festival in the Shetlands, at one place that was very brightly lit and I could see the audience quite clearly. And all the way through, there was one guy nodding away, applauding every line obviously getting into it. And on the other side, there was another guy being physically restrained from getting up on the stage and hitting me. He just fused, he really went. You could see it in his face. And I thought, ‘Well, I’ve really got a winner now.’ To the extent, you know, that it had succeeded in being at least provocative.”

Is that all you can ask of a song these days?

“I’ve never really known what you’re supposed to expect from song,” he said. “And I think there’s a danger in the very talking about it, it makes it seem like you’ve achieved more than you have.”

Especially, perhaps, when the song itself seems not much more than an attention-seeking novelty, like Morrissey’s “Margaret On The Guillotine”.

“I don’t know much about Morrissey,” Costello replied. “Apart from the fact he sometimes brings out records with the greatest titles in the world that somewhere along the line he then neglects to write songs for. But I haven’t heard that particular song, so I can’t really comment on it. But generally, I think the best that can be achieved by songs like ‘Tramp The Dirt Down’ is something like ‘Free Nelson Mandela’ achieved. The record didn’t get Mandela released, but it did increase the membership of the anti-apartheid movement, because Jerry Dammers very intelligently printed their address on the sleeve. And the record introduced Mandela to a lot of people who maybe otherwise would never have heard of him. And there’s a point where political art only works on that level – the communication of basic information.

“On a more immediate level,” Costello went on,” you can, I suppose, hope to annoy people, like that guy in the Shetlands. I mean, The Sun ran a piece a couple of weeks ago saying I’d been banned by the BBC because I said, ‘I’m fucking sick of this’ on the Late Show. I haven’t seen the programme, but I remember swearing. I was asked something and I remember saying, ‘I’m 35 years old. I’m not a boy anymore. Don’t patronise me.’ It’s like that Grateful Dead song, ‘Ship Of Fools’ – ‘It makes me wild/With 30 years on my head/To have you call me child.’ You do sometimes feel particularly with the nanny aspect of this government that they’re treating everybody like little fucking children.

“So The Sun runs this thing saying I swore on a live television show. And it was obviously pre-recorded because I was in America when it was shown. But a spokesman is supposed to have said, ‘Well, it jolly well caused a stink around here at the BBC.’ And they even quoted me. ‘Costello said last night, “I stand by every word.”’ Well, they must be fucking telepathic at the fucking Sun, because no one spoke to me about it.

“But that’s an accolade, to get that sort of thing written about you in The Sun. It means you’re still getting up somebody’s fucking nose,” he said, laughing. “These days, that’s an achievement in itself.”

Finally, here’s a fantastic clip of Costello performing “Tramp the Dirt Down” on the BBC’s Late Show special on Spike from February 1989, which at the very least is a reminder of a time when many of us were inclined to cheer at the very mention of Costello’s name.