Running The Voodoo Down! 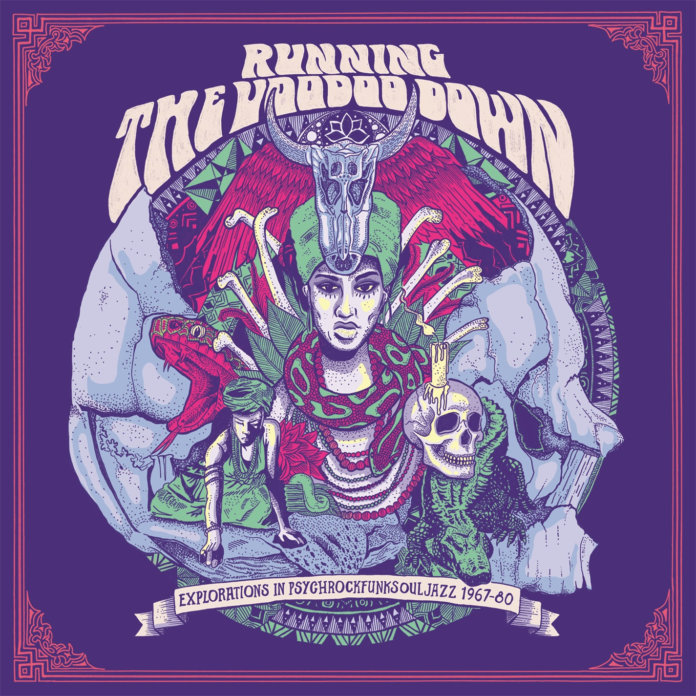 The next issue of The History Of Rock isn’t due ‘til next week, and while briefly giving another plug to our current issue of Uncut, I thought I’d indulge myself this week by posting a review of one of the best comps I’ve come across this year: Running The Voodoo Down! Explorations In Psychrockfunksouljazz 1967-80.

According to George Clinton, the roots of his psychedelicised funk can be traced back to a Vanilla Fudge concert, of all places. In 1967, Clinton’s formative band The Parliaments were playing a show at a college in upstate New York, on a bill with Vanilla Fudge and The Box Tops. “We had to use the Vanilla Fudge’s equipment, because we didn’t have any,” Clinton told Rolling Stone in 1990. “Goddamn! That shit was so bad. It was extremely loud. So I went out and bought Jimi Hendrix’s Are You Experienced?, Cream’s album, a Richie Havens record and Sly’s Whole New Thing. I gave them to Eddie [Hazel, guitarist] and Billy [Nelson, bassist] in the band. They were just 15, 16 at the time. And the second night we used the Vanilla Fudge’s equipment, we knew what to do with that motherfucker.”

Clinton had identified a way of taking back control. White bands had been making capital out of African-American song for decades; Vanilla Fudge themselves had just released a debut album that featured amped-up covers of “People Get Ready” and “You Keep Me Hangin’ On”. Following the example of Hendrix, though, Clinton realised that inspiration could flow in more than one direction – that the volume and possibilities of psychedelic rock could add new dimensions to the music of black America. “[Hendrix] took noise to church,” he continued to Rolling Stone. “With that feedback, you could almost write the notes of that feeling down. His music, like the Beatles’, was way past intellectual. That shit was in touch with somethin’ else.”

“Shit in touch with somethin’ else” might make a neater subtitle for Running The Voodoo Down, lumbered as it is with “Explorations In Psychrockfunksouljazz 1967-80”. But then neatness isn’t something that this music actively encourages, so disdainful is it of genre confines, racial profiling and the orthodox parameters of song. The Chambers Brothers, for instance, began as a Mississippi gospel quartet, evolved through LA folk clubs, and by 1967 had recruited a white drummer and turned into a kind of elevated garage rock group, with a fuzzy take on the soul canon; “People Get Ready” recurs, again, on their debut album. Running The Voodoo Down, though, goes with the full 11-minute version of their signature “Time Has Come Today”, a Love-like ramalam that loses its temporal bearings after about two and a half minutes, and at times resembles a Jefferson Airplane stab at “Whole Lotta Love”. “My soul,” observes Joe Chambers, “has been psychedelicized.”

“Time Has Come Today” has figured on plenty of similar compilations in the past, of course, and Dean Rudland and Tony Harlow’s selections here mix up the canonical (Funkadelic’s “Maggot Brain” and “Red Hot Mama”, The Undisputed Truth’s “Like A Rolling Stone”, Sly & The Family Stone’s “Thank You For Talkin’ To Me, Africa”), with a good few cratedigging rarities. If anything, in their enthusiasm they may have set themselves a little too wide a brief: any compilation that features Don Cherry’s “Brown Rice”, proto-punks Pure Hell, and an early solo track from the jazz pianist Keith Jarrett, in which he pitches himself as a mediocre Richie Havens impersonator, is certainly an eclectic listen.

Slowly, though, two imperatives start to become clear: black musicians reconfiguring white rock songs; and the involvement or proximity of either Clinton, Sly, Hendrix or Miles Davis (the album title is adapted from Bitches Brew’s “Miles Runs The Voodoo Down”). Sometimes the two meet serendipitously, as on Eddie Hazel’s limber extrapolation of “California Dreamin’”, or the inspired way that the Isley Brothers segue CSNY’s “Ohio” into Hendrix’s “Machine Gun”, a highlight of their 1971 rock covers set, Givin’ It Back.

At others, though, a track feels like it’s been included more out of conceptual expediency than real quality, Buddy Miles’ post-Band Of Gypsys slouch through another Neil Young song, “Down By The River”, being alright insofar as Miles at least resists the temptation to scat. Hendrix himself only actually figures on a useful bit of marginalia alongside Miles, playing choppy funk (and overdubbing himself on bass) while Lightnin’ Rod (Jalaluddin of The Last Poets) lays the jive-talking groundwork for rap over the groove.

Miles Davis’ rapprochement with rock, meanwhile, is shown to be a little more deconstructed than most, illustrated by a miraculous excerpt from the Jack Johnson sessions, “Willie Nelson (Take 3)”. Over ten minutes, the impression is of zen masters manoeuvring around one another in a vacuum, with John McLaughlin and Sonny Sharrock articulating a rock imperative through flecks and gestures more than concrete riffs. Hendrix is a clear antecedent, but “Willie Nelson” sounds closer to the contemporary explorations of Can than it does to ‘60s psych.

In the summer of 1970, soon after the Jack Johnson recordings, Davis went back on the road. He played on the same bill as Hendrix and Sly at The Isle Of Wight Festival, with Keith Jarrett on keyboards, and further confronted a rock audience by opening a bunch of shows for Santana in the States. A year later, Santana marked the closure of the Fillmore West in San Francisco with a surprisingly effective, and funky, version of Davis’ “In A Silent Way”.

Included here, it’s one more example of how Running The Voodoo Down initially looks like a document of creative chaos, and ends up mapping a wide world of music that is harmoniously folding in on itself. It describes a disparate scene, where ideas and personnel exist in a permanently dynamic state of flux. Where Jimi Hendrix and Miles Davis never quite managed to work together, but their matrix of connections remained, in true psychedelic fashion, mind-expanding.