Mick and co open the archive: jumpsuits, Warhol prints and a padded dog jacket are revealed 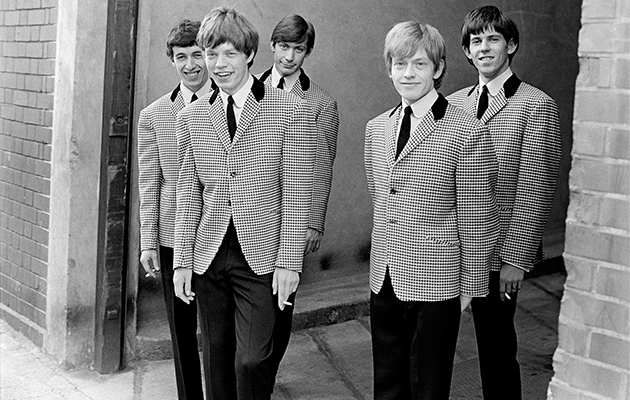 In 1963, each member of The Rolling Stones filled in a questionnaire for their official fan club. Among the answers they gave, one proves particularly instructive 53 years later. Asked, What is your personal ambition?, Bill Wyman reveals he plans to “Own a castle”. Brian Jones wants to “Live on a houseboat and have a very fast speedboat” – a sentiment shared with Keith Richards, who also plans “To own a boat”. Charlie Watts, meanwhile, has his eye on “A pink Cadillac (1935)”. But what are the private goals and dreams that drive Michael Philip Jagger, then 20 years old? In ballpoint pen, the singer has written, “To own a business my own business”. 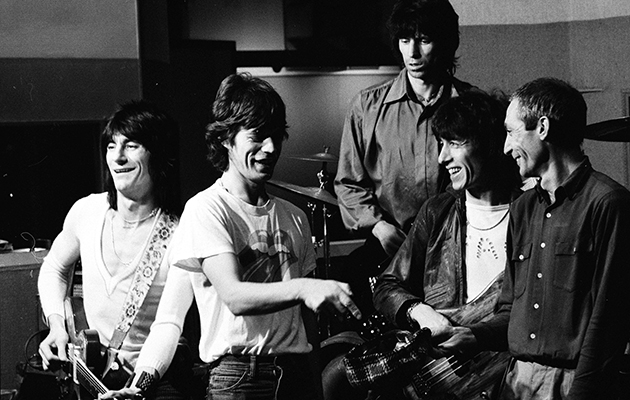 You suspect that Jagger – famed for his frugality – may have allowed himself a wry smile as he read that back while strolling round Exhibitionism, perhaps as he leaned in towards the glass display case to better make out the faded blue ink on the elderly questionnaire. Exhibitionism opens days before David Bowie Is… closes at the Groninger Museum in the Netherlands. The Bowie exhibition – which has toured seven different countries, with Japan to come in 2017 – is clearly the model for Exhibitionism (as it was also for Pink Floyd’s ill-fated Their Mortal Remains retrospective). As with the Bowie exhibition, here are costumes, photographs, artwork, memorabilia and instruments; film footage is beamed onto video screens, audio clips of music and interviews play from hidden speakers. David Bowie Is… included over 300 objects from Bowie’s personal archive; Exhibitionism collects 550 items and, at 20,000 ft2, is double the size. If Bowie set the bar high, the Stones are keen to at the very least match it.

If the Stones’ recorded output since A Bigger Bang has seen them successfully monetise their archive – deluxe editions of Exile On Main Street, Some Girls and Sticky Fingers plus their From The Vault series – then Exhibitionism represents a continuation of that project but on a far larger and interactive scale. In one section, you can literally walk through their past.

But while Exhibitionism ticks many of the right boxes, it could do with more of the kind of warm, revealing details provided by that 1963 fan club questionnaire. You might squint to make out the details on the scale model of the Steel Wheels stage set or pause to admire the seven Warhol prints of Jagger that line a corridor, but the gems are items like Keith Richards’ hand-written letter to promoter Bill Graham in the wake of the IRA Hyde Park and Regents Park bombings in 1982, when the Stones were booked to play Slane Castle, County Meath. Richards’ strongly-worded letter ends, “I ain’t going unless ALL (including the local promoters) proceeds go to the victims.”

Exhibitionism opens with two banks of computer-generated statistics. One counts up through years on the road, concerts played, tours undertaken, countries visited and audiences entertained. The other charts the number of songs the band have recorded, and how many hours, minutes and seconds it would take to listen to them (46 hours, 42 minutes and 41 seconds, in case you were wondering). It’s impressive, if you want the accountant’s view of their history. It’s followed by another antechamber where the history of the Stones is played out across 72 screens. The footage begins and ends with fans screaming. It hits the familiar beats: drugs bust, Brian, Altamont. “First you shock them, then they put you in a museum,” says the young Jagger, with one eye firmly on the future. 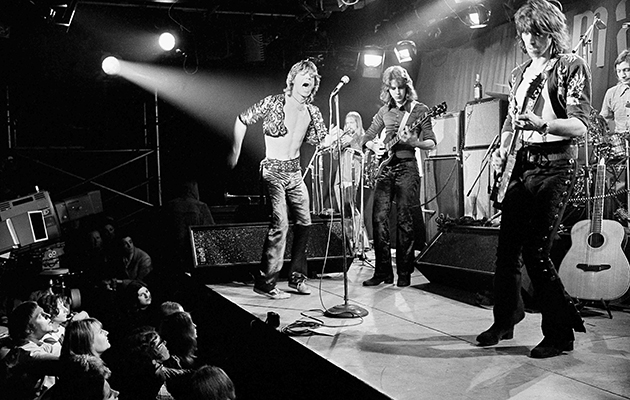 It’s followed immediately by one of the exhibition’s highlights: a recreation of Keith, Brian and Mick’s Edith Grove flat from 1963. We see the kitchen first (“Worse than the bathroom,” mutters Richards’ in an audio clip), with plates stacked high in the sink and surfaces covered with cigarette packets, overflowing ashtrays, half-full milk bottles and empty cans of Heinz Spaghetti, Crown Stewed Steak and Campbell’s Chicken Soup. A poster for the Star & Garter in Windsor hangs on a wall, advertising gigs by Joe Harriott, Tubby Haynes, Graham Bond and Hogsnort Rupert’s Soul Brothers. The room smells authentically of sour milk. The bedroom is just as wretched – more ashtrays, bottles of Watney’s Pale Ale, what look like regulation prison sheets on the beds, a poster for the Woodstock Hotel in North Cheam on the wall – as does the living room, with its one-bar heater and mouldy wallpaper. There are magazines – Melody Maker, Disc, NME, Parade – and albums by Chuck Berry, Bobby Bland and Muddy Waters scattered across the top of a Garrard record player and cabinet. (“Mick lives up the road in a mansion now,” laughs Charlie).

After such an ambitious scene-setting experience, Exhibitionism continues to bring us within satisfying reach of the band’s earliest days. In ‘Meet The Band’, there’s the first contract signed between Brian Jones and Eric Easton – Andrew Loog Oldham wasn’t old enough to sign – the terms of which gave the band 6% of a record’s wholesale price. Here’s the band’s first recording at IBC Studios, March 11, 1963 – a 12” with “Diddley Daddy”, “Bright Lights Big City”, “Road Runner”, “I Want To Be Loved” and “Baby What’s Wrong”. Another nugget: Keith’s diary from 1963. Under the date Thursday, January 10, he’s written in tight black lettering: “Marquee. First set 8.30 – 9. Musically very good but didn’t quite click. Second set 9.45 – 10.15 swung much better. Brian and I rather put off by the lack of volume due to work to rule in power stn.”

Just as the exhibition is getting going, it swerves disappointingly into gear porn. Look! A whole room of guitars! Here, it is possible to inspect Darryl Jones’ Modulus fretless bass up close. Headed ‘Recording’, this section includes a recreation of Olympic Studio One – apparently assembled using footage from Godard’s One Plus One. The tape boxes and log books from Olympic, Pathe Marconi, Nellcote and the Stones’ Mobile lie inert behind glass. It’s interesting, if rather static. To ‘Film & Video’, we hear Martin Scorsese tell us in voiceover, “The drama of being the Stones is compelling.” Clips from all 30 Stones videos whizz past – from the brilliant 1968 film for “Jumpin’ Jack Flash” and Julien Temple’s baroque “Too Much Blood” to later promos that largely seem to feature the band miming in warehouses.

The tour posters, album sleeves and logos dominate the ‘Art & Design’ section – it would be remiss not to acknowledge the contribution made by John Pasche‘s ‘lips’ logo to the band’s history – and are mostly wonderful. Pasche’s posters, for instance, for the 1970 European tour and 1972 American tour are design high watermarks in any sphere. We see the sketches that Mick and Charlie once drew up for a half-plane, half-eagle hybrid for an American tour poster: the exhibition could do with more of this behind the scenes detail. Onwards to ‘Style’, and you’ll find Ossie Clark jumpsuits next to Antony Price trousers or – later – Alexander McQueen coats and Marc Jacobs shirts. One wall is devoted to Jagger’s “Sympathy For The Devil” tour outfits: a parade of capes, feathers and hats. 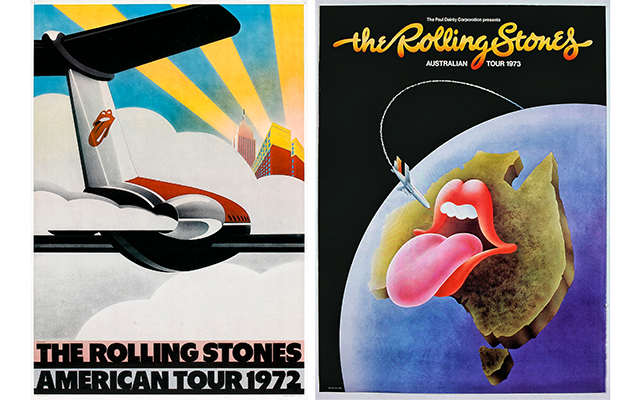 On through ‘Rare’ – pass Jagger’s make-up chair and Richards’ leopardskin-lined travelling wardrobe case and make your way to the list of aliases the band have used to check in to hotels – and a rather undeveloped section on ‘Musical Collaborators’ that seems to be stowed away in a corridor. Surely the critical work done by Ian Stewart, Nicky Hopkins and Bobby Keys deserves greater prominence than this? Finally, we come to ‘Performance’ – a recreation of the backstage area at a Stones concert. A sign on a door lists the band’s individual dressing rooms – Charlie’s Cotton Club, Ron’s Recovery, Jagger’s Workout and Keith’s Camp X-Ray. It would have been brilliant to wander round replicas of those, rather than a non-specific space filled with flight cases, cigarette packets and mineral water bottles. The show climaxes with a 3D film of the band performing “Satisfaction” at Hyde Park in 2013.

The gift shop mixes branded Oyster card holders, badges and t-shirts with slightly daft high-end merchandise, like a pair of Master & Dynamic headphones, a snip at £350, or a James Smith & Sons umbrella for £225. A padded dog jacket will set you back £37.50; a Smythson leather notebook £50; a Rubik’s Cube for £14.99. 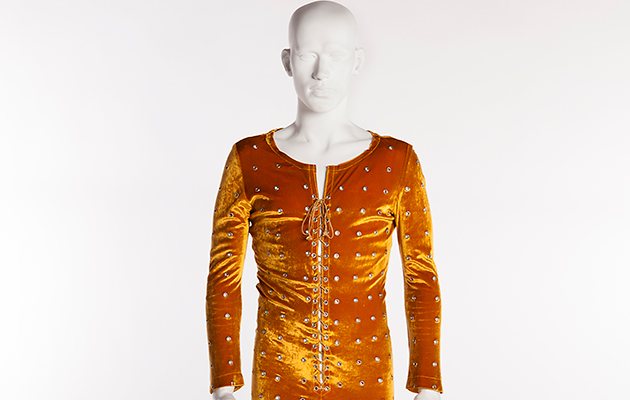 Arguably, Exhibitionism fulfils its brief to present the Stones’ narrative from 1963 to the present day. But it doesn’t quite lift the velvet rope and usher you inside the guest area. If only there were more preliminary sketches, more hand-written lyrics, diary pages, or works in progress; anything, really, to shine a light on the band’s working practices or inner life. Arguably, this is very much typical of the Stones and how they have chosen to manage their legacy – after all, they have have suffered more than their fair share of death, misfortune and unwanted scrutiny. Exhibitionism reinforces scale and spectacle – very Stones-esque watchwords – when what is really required is a little more nuance, human intimacy and detail.