There have been plenty of surprises and revelations in music during the last twelve months. Admittedly, perhaps not all of them have had the same impact as the sudden arrival of records by David Bowie or My Bloody Valentine; nevertheless, a Tweet on June 3 from Edwyn Collins’ label AED carried its own quietly momentous piece of breaking news. “A new @RoddyFrame record in the wind, on AED, early 2014. It’s a lovely thing, just wait til you hear it. Watch this space, popsters.” 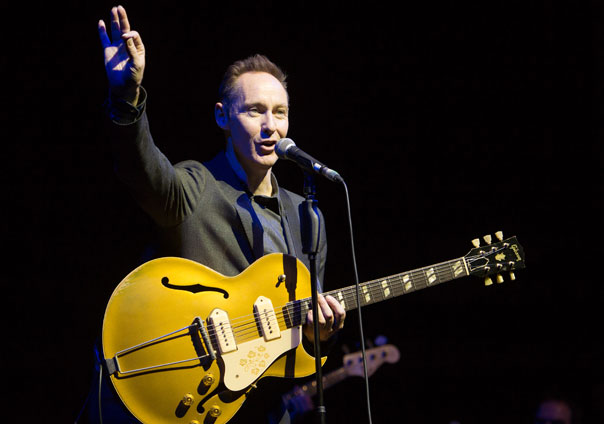 There have been plenty of surprises and revelations in music during the last twelve months. Admittedly, perhaps not all of them have had the same impact as the sudden arrival of records by David Bowie or My Bloody Valentine; nevertheless, a Tweet on June 3 from Edwyn Collins’ label AED carried its own quietly momentous piece of breaking news. “A new @RoddyFrame record in the wind, on AED, early 2014. It’s a lovely thing, just wait til you hear it. Watch this space, popsters.”

It’s been seven years since Roddy Frame’s last studio album Western Skies. Since then, he’s played upwards of 20 gigs and a handful of festivals. I remember an acoustic show at Bush Hall in October 2011: a terrific showcase for Frame’s nimble, life-affirming pop, although it made me wonder (and not for the first time) why unlike so many of his contemporaries Frame hasn’t quite been given the dues he deserves. Indeed, a month before the new album announcement in June, Frame posted on Soundcloud a demo for “Green Jacket Grey”, one of his legendary unreleased tracks from the early Eighties, offering yet more compelling evidence for his astonishing songwriting gifts. And on Sunday, during the first of three shows to mark the 30th anniversary of Aztec Camera’s debut, High Land, Hard Rain, Frame reminded us further of the calibre of his back catalogue.

It’s possible to watch Frame as he bounds around the stage of the Theatre Royal, Drury Lane with something approaching jealousy. After all, there are few men in their late 40s who look like they’ve got the same waist size as they had in 1983. Frame at 49 is absurdly youthful, full of boyish enthusiasm – ‘the sound of young Scotland’ evidently persists – whether in the way he moves round the stage a little like a cat on its uppers, or in his self-deprecating between song banter. “I don’t really like photographs,” he says, “but tonight I don’t mind. Or you can set up an easel at the side of the stage and maybe do a watercolour…”

Although we’re ostensibly here to celebrate High Land, Hard Rain, the evening’s set is broken down into two halves. The first finds Frame – initially solo, then joined by bassist Amulf Linder and drummer Adrian Mehan – treating us to “a few songs from the East Kilbride period”. It’s astonishing to be reminded that Frame was writing songs this good – “Green Jacket Grey”, “Orchid Girl” and “Just Like Gold” are standouts – when he was just 15 or 16, playing them in the youth clubs of East Kilbride. Behind him, black and white images of his hometown appear: a concrete underpass, tower blocks, housing schemes, a disused school, Glasgow in the Seventies in all its glory.

The High Land, Hard Rain set itself faultless. I bought the album in 1983 or so from Max’s Records in Eastbourne – a beloved second home for me as a teenager – and it’s one of the few albums from that period that I’ve regularly revisited since, regardless of how my own personal tastes have shifted. Admittedly, I have an on-off relationship with the production – the drum sound is conspicuously of its time – but the important bits (the songs themselves, that is) continue to shine. Here – with the addition of guitarist Tom Edwards and keyboardist Owen Parker to the band – everything is rendered in splendid technicolour. Opener “Oblivious” sets an astonishingly high standard – but the run of songs that follows – “The Boy Wonders”, “Walk Out To Winter”, “Pillar To Post”, “Down The Dip” – sustain the consistently high level of Frame’s songwriting, full of chiming melodies and soaring arpeggios. An impromptu between song Q+A, meanwhile, reveals many useful facts. Yes, this is still the same 1953 Gibson ES-295 Scotty Moore he played on the original album. Yes, he is using a 1mm Plectrum. Aztec Camera’s first professional engagement was supporting The Teardrop Explodes on the day Ian Curtis died. The title for the album came from Highlands Avenue, Acton, where he was living while writing part of it; “If you want to go on a rock pilgrimage, the No. 9 goes there.” There’s another show tonight (Tuesday) in Manchester and tomorrow (Wednesday) in Glasgow. If you can get tickets, I’d advise you to go.

Finally, please excuse the shameless plug, but here’s a gentle reminder that the latest collection in our Sonic Editions series is now available. This is the new 2014 collection, which contains 25 iconic images curated by Allan and includes pictures of The Beatles, Bruce Springsteen, Ryan Adams, The Smiths, Bryan Ferry, Johnny Cash, Bob Marley, Debbie Harry and Tom Waits. Each image is available as a limited edition print, individually numbered, hand printed and framed to order, and you can click here to view the full collection.