At 2011's Glastonbury, Robyn Hitchcock performed all of Captain Beefheart's Clear Spot record - this year the former Soft Boy is toeing the line a little more, and appearing with his American supergroup of a backing band, The Venus 3. 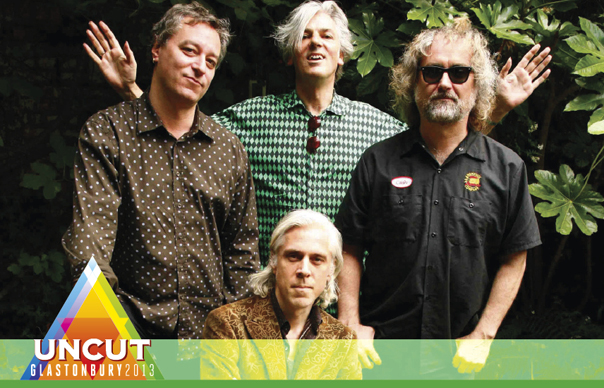 At 2011’s Glastonbury, Robyn Hitchcock performed all of Captain Beefheart’s Clear Spot record – this year the former Soft Boy is toeing the line a little more, and appearing with his American supergroup of a backing band, The Venus 3.

Strangely, though, Peter Buck isn’t present, though Paul Noble makes a fine job of filling in on guitar. Joining Hitchcock are the usual Venus 3 rhythm section, Scott McCaughey and Bill Reiflin – the latter in particular is a stunning musician, all perfect feel and adroitly judged fills, while always serving the song.

Robyn begins with a short acoustic segment, kicking off with the old Soft Boys track “Only The Stones Remain”, which, not surprisingly considering tomorrow night’s headliners, goes down well with the crowd at the Spirit Of ’71 stage.

After “The Wreck Of The Arthur Lee”, the group and assorted other musicians take the stage for Venus 3 songs including “Museum Of Sex” and the relentless “Adventure Rocket Ship”, along with some earlier solo Hitchcock tracks such as “Airscape” and “Oceanside”.

There’s no way enough vocals in the mix, but luckily you can still hear Robyn’s unique stage banter, this time with topics ranging from baby spiders inside your heart, wardrobes the Russians sent into space and the difference between capitalist and socialist guitar strings (“capitalist strings are in tune with themselves, socialist strings are in tune with each other”, if you were wondering…).

The Soft Boys’ “Kingdom Of Love” and The Venus 3’s “Ole! Tarantula” end the set, before Robyn bids everyone goodbye: “We haven’t got any shows lined up, you can’t buy any records, in fact you’ll probably never see us again…” He’s joking, of course, but hey, don’t scare us, Robyn.

Only The Stones Remain
I Got The Hots
The Wreck Of The Arthur Lee
Museum Of Sex
Light Blue Afternoon
Queen Of Eyes
Adventure Rocket Ship
NY Doll
Oceanside
Be Still
I Love You
Airscape
Up To Our Nex
Kingdom Of Love
Ole! Tarantula