As he turns 75, the national treasure revisits his Soft Machine days in Uncut 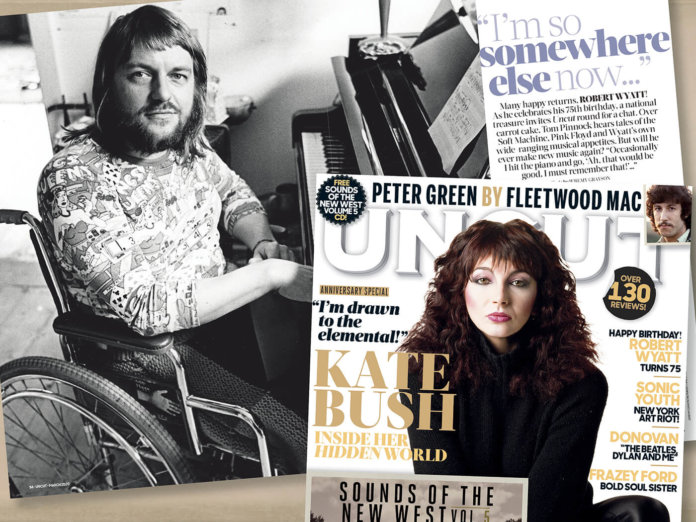 In the latest issue of Uncut – in shops now or available to buy online by clicking here – we celebrate the 75th birthday of a legendary musical maverick. Robert Wyatt invites Uncut’s Tom Pinnock to his home in Louth, Lincolnshire, for carrot cake and tales of Soft Machine, Pink Floyd and Wyatt’s own wide-ranging musical adventures.

Talking about the years of heavy gigging before the accident in 1973 that left him wheelchair-bound, Wyatt says: “That was a whole life there, even two. Before ’68, we were this English grammar school band, a bit shaky, but we did our thing. That was a really friendly little band, with Daevid Allen and Kevin Ayers, just friends. We were also not like each other, which is why it couldn’t have lasted. But to be young with, they were great. The early years playing in bands like The Wilde Flowers was the most fun – if I’d only ever done that, I’d be quite happy.”

Once Soft Machine took off, though, Wyatt was playing all the time, from UFO and Middle Earth to touring America with Jimi Hendrix. “Playing the gigs required such concentration, listening to each other and keeping it all flowing, that I’d hardly register where we were, exactly. Talking of places like UFO, I remember that us and Pink Floyd and used to watch each other when we played the same venues, and there was just total mutual respect – you couldn’t be rivals when you were trying to do completely different things. I’m just grateful to the brilliant musicians I got to play for. Supporting Hendrix was very scary – if you’re in an aircraft hangar with 5,000 Texans in it, you’ve gotta fuckin’ get on with it and not stop until your half-hour is up. But it meant we came back to the UK really able to hit the ground running.”

Kevin Ayers was lost somewhere along the way, though… “Yeah, without Kevin, of course. He’d had enough, and quite rightly he wanted to go and write his songs. I do get upset when he’d say later that he ‘wasn’t technical enough’ for the band – he was very good! I loved drumming with his bass playing, I loved his deep sprechgesang singing, a good contrast to mine, and I loved doing his songs.”

When did everything start for you? I imagine it must have been a huge moment when Daevid Allen first turned up to lodge with your family in Lydden. “I’d already got into a lot of music through my brother Mark – he brought home the first Mingus and Ornette Coleman – but Daevid showed me how to live another way. Lydden was a little village then, there was just a post office, a few houses, a pub, and Daevid used to take his dog out for a walk, up and down… his dog being a tin on a long string. I was very impressed by that. When I first played music with Daevid, it was jazz and poetry. He would read out this poetry and Hugh Hopper and I would fiddle-fiddle, toodly-boodly behind him. I was at school and doing worse as the years went by, but one of the people who said “you don’t have to approach life like that” was Daevid. He was the person who was doing what we assumed Dadaists did, which was inventing their own lives, writing their own scripts. That became a way out for me.”

You can read much more from Robert Wyatt in the latest issue of Uncut, in shops now with Kate Bush on the cover.