Reviewed… The Damned: Don’t You Wish That We Were Dead 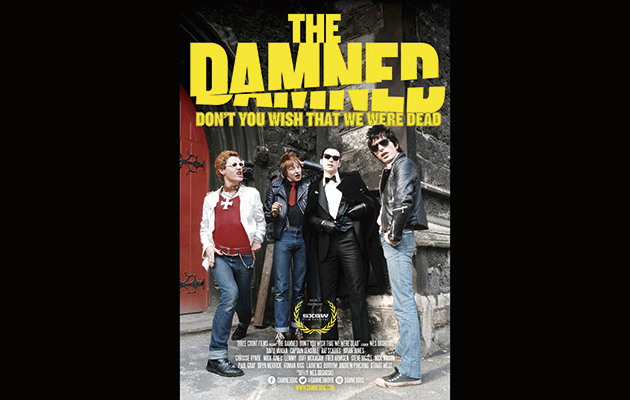 Watching Wes Orshoski’s excellent new documentary about The Damned, you might wonder why no-one’s ever made a film about them before. “They always gave the impression something bad could happen at any moment,” says a former associate of the band, and as one anecdote (usually involving alcohol, violence, or most likely both) rolls into another, the story of The Damned emerges as one of punk’s more compelling, lesser-told yarns.

Orshoski charts the band’s trajectory from the toilets of Fairfield Halls, Croydon (“One day, I found a turd that just would not flush,” reveals former cleaner Captain Sensible) through the earliest days of punk (“They didn’t think we were up to it,” admits Mick Jones, a onetime band mate of guitarist Brian James) up to the band’s recent US tour. The picture that emerges is of a band who thrive on a certain kind of chaos.

The band’s many personnel changes make for a colourful, if convoluted history, while conflicts continue today – particularly acrimony between Sensible and original drummer Rat Scabies. Interviewed by Orshoski, the four original members – Dave Vanian, James, Sensible and Scabies – sound a little like Pete and Dud characters by way of The Young Ones.

Recalling an “average night” on The Damned’s 1979 US tour, drummer Rat Scabies remembers, “There’d be fire engineers, police, dogs, and in the middle there’d be us, throwing water over each other.” It is a rambling, complicated narrative, enlivened by complimentary interviews with the likes of Glen Matlock, Nick Mason and Lemmy, while Ian McKaye, Jello Biafra and Chris Stein provide an American perspective.

The NY-based Orshoski does a good job outlining the UK punk scene for US audiences; along the way, perhaps inadvertently, he helps illustrate just how out of step with their contemporaries The Damned’s larks were. “Can’t do the dole queues of discontent, that’s just not me,” admits Sensible. Their antics might account for the way they never quite achieved the notoriety or success of the Pistols or The Clash; a fact Orshoski’s film might go some way to rectifying.