Tuesday night, I went to see the War On Drugs guy again. I mention this, in relation to Mark Kozelek and Sun Kil Moon's Hackney show, because Kozelek doesn't stop mentioning it himself for much of the two and a half hour show; a show which, by the by, is one of the very best and certainly most surprising I've ever seen him play. 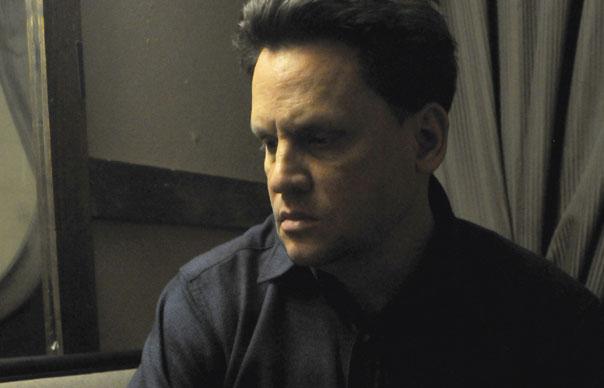 Tuesday night, I went to see the War On Drugs guy again. I mention this, in relation to Mark Kozelek and Sun Kil Moon’s Hackney show, because Kozelek doesn’t stop mentioning it himself for much of the two and a half hour show; a show which, by the by, is one of the very best and certainly most surprising I’ve ever seen him play.

He begins, then, with some droll justification; “I’m a nice guy,” repeated several times, talks about a third War On Drugs-related song, tries to find out if anyone can actually pronounce “Granduciel”, refers to him disparagingly by way of a “Stevie Nicks t-shirt”, mentions “two words: Soul Asylum”, and eventually starts apologising to the band, before the caveat tag of “Bob Dylan parody shit”.

But if at times the whole business has seemed like a weird pathology on Kozelek’s part, here it’s much more clearly a schtick, part of his stand-up comedian strategy of looping back again and again to the same remorseless riff. When I interviewed him recently for the current print edition of Uncut, he was at obsessive pains to present himself as “a funny guy”. At this show, more than most of his recent London gigs I think, he proves it. He also proves, usefully, that his current relative success is pushing him into a startling and brilliant new live persona.

God knows how long it’s been since I saw Kozelek play with a band, but he turns up this time with a drummer, electric guitarist and keyboard player, allowing him to concentrate for at least half the set on his vocals, pacing the stage and, at times – in the lovely opening “He Always Felt Like Dancing”, closer here to hip-hop – ducking and weaving so he isn’t so far from dancing himself.

Such freedom could plausibly have made Kozelek more self-conscious, but it seems to embolden him – as does the big 1,400-strong crowd, most of whom are standing. The fractionally rowdier, celebratory, though still respectful, atmosphere is evidently strong enough to get to the singer. Instead of berating the audience, he’s thankful, flattering and good-natured. At the end, as a symbolic act of gratitude, he takes the mic he’s been using, superstitiously and consistently, for the past seven or eight years – the one he used, he stresses, to call out both “fucking hillbillies” and “beer commercial rock” – and flings it into the audience. First, though, he diligently wraps it in two towels and seals the bundle with some of the drummer’s gaffatape. A nice guy, to recap.

A great singer, too, even when he’s bawling “The Possum” – played live for the first time here – while lurching back and forth, reading the lyrics from a lectern. I have a faint residual memory of Kozelek’s first teenage music being made in hardcore bands (apologies if I’ve got this wrong), and it’s a strain that resurfaces here, as his vocal range becomes more potent and expansive. If he sings “He Always Felt Like Dancing” and “I Watched The Film The Song Remains The Same” with the trademark dolorous delicacy that became his trademark, he can also switch up into a reverberant croon that can be sometimes arch and tender (“The Christmas Song”), at others so loud and powerful (on the closing “Carissa”, say) that it actually adds even more emotional heft to these already significantly freighted songs.

Measured and discreet, this version of Sun Kil Moon can be roiling and punchy, too, and the straight-up rock songs are a revelation: “War On Drugs: Suck My Cock”, “Hey You Bastards I’m Still Here”, “Richard Ramirez Died Today Of Natural Causes” and, best of all, “Dogs”. For a man who talks about only listening to classical music and Spanish guitars, Kozelek’s take on rock is currently full-blooded and innovative. And while the false starts of “The Possum” are understandably rough – milked for James Brown-style theatre by Kozelek, ever alert to exploiting his own absurdity – one striking aspect of the whole show is how many of the songs have been fleshed out and sound more conventionally finished than the original, sometimes purposefully scrappy recorded versions.

Kozelek’s much-stated current method is to write songs as spontaneously as possible, and move on from them pretty quickly; none of the songs he plays here predate 2012’s “Among The Leaves”. Nevertheless, it’s interesting to see how this stuff has evolved: not just the louder, faster songs, but the Jimmy Lavalle pieces, “He Always Felt Like Dancing” and “Ceiling Gazing”; on both, the electric guitarist’s work is discreet but critical.

Middle age is very much part of Kozelek’s schtick, of course, not least when he summons a woman from the audience to play Cher to his Sonny in a funny, affectionate version of “I Got You Babe” that skirts agonisingly close to, but just about avoids, sleaziness. This is where Kozelek is right now, full of slightly awestruck good vibes, self-deprecating bad ones, enduring beefs, expanding musical perspectives, and a desire to play one or two feelgood songs like “I Got You Babe” – none of his own, he suggests ruefully, are up to the job.

The thing is, the show feels like a tremendous validation and culmination of not just Kozelek’s weird and strong last 24 months, but also of the whole extraordinary 22 years of his career. Bad things happen, people die, girls leave, life on the road can be grim but, as many of his best songs of late make clear, there’s often a point of acceptance and contentment that you can reach on the other side of it all. That’s how this magnificent gig shapes up. Somehow, as that guy once put it, the wonder of life prevails…

On the Desert Shore and Jimmy Lavalle albums

On Among The Leaves