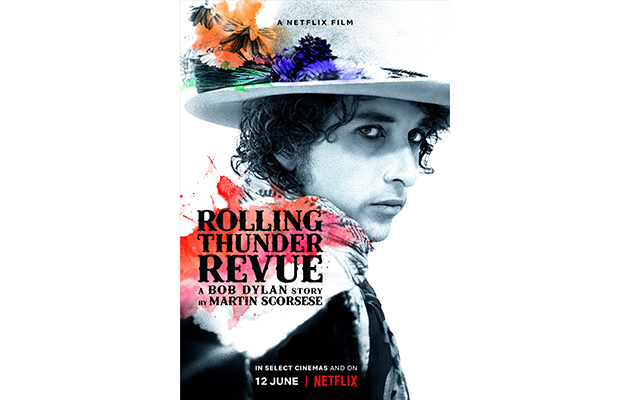 For anyone wondering what Bob Dylan thinks of Bob Dylan, you’re unlikely to find answers in Martin Scorsese’s excellent, playful new documentary. Asked to articulate his thoughts on the Rolling Thunder charabanc, Dylan looks momentarily perplexed then exasperated. “It was over 40 years ago,” he exclaims. “I wasn’t even born then!”

For Dylan, of course, the obsessive camouflaging of truths has been a career-long undertaking – and to an extent, Scorsese’s Netflix documentary is similarly obfuscatory. Subtitled a “Bob Dylan story”, the film weaves concert footage and contemporary interviews in with a handful of mischievous subplots. But mind, this is more than just a companion piece to the recent Rolling Thunder Revue: The 1975 Live Recordings set, or a boisterous cousin to the director’s 2005 documentary No Direction Home. It’s a three-dimensional, metatextual romp showing Dylan’s joyous excursion through the troubled heart of mid-’70s America. Freewheeling, in every sense.

The footage – much of it taken from Dylan’s impressionistic road movie Renaldo And Clara – is rich and varied. Here’s Dylan and Patti Smith, halfway up a staircase, talking about the universe during a party in Greenwich Village; there’s Joni Mitchell, Dylan and Roger McGuinn playing “Coyote” at Gordon Lightfoot’s house; there’s the full gang enjoying an excursion to Niagara Falls on a day off. Meanwhile, Allen Ginsberg acts as a kind of one-man Greek chorus for the proceedings, delivering idiosyncratic monologues to camera. Chaos is never far away.

But if your tolerance for watching semi-stoned musicians exchanging goofy bantz on the tour bus wears thin, no matter – the onstage footage presents different, more dynamic pleasures. A full-length version of “Isis” captures the tour’s seductive musical groove, with the band managing to somehow sound compellingly loose and tight at the same time, underpinned by Mick Ronson’s heavy, blocky chords.

To complement this archive material, Scorsese and Rosen have mustered an impressive cast list of survivors for contemporary perspective. Joan Baez is especially funny and forthright: “Did I have any reservations about going on the tour?” she asks rhetorically. “Have you ever been on the road with Bob Dylan?” It is lovely to see Sam Shepard – in an interviewed conducted a few years ago – while there are insights from McGuinn, Ramblin’ Jack Elliott, Rolling Stone writer Larry “Ratso” Sloman, boxer Ruben “Hurricane” Carter and others.

But all is not what it seems. We meet a European filmmaker who claims to have documented the tour. Then there is a Congressman who reveals deep connections between Dylan and Jimmy Carter. It all adds up to a lively dance between “what’s real and what is not”. Largely, though, these digressions add seasoning to the pot. They don’t even detract from the simple pleasure of watching Dylan, in the present day, at his most incorrigible. “Ramblin’ Jack Elliott?” he muses at one point. “He was a better sailor than a musician.” Which, perhaps, is as close to the truth as we’re going to get.