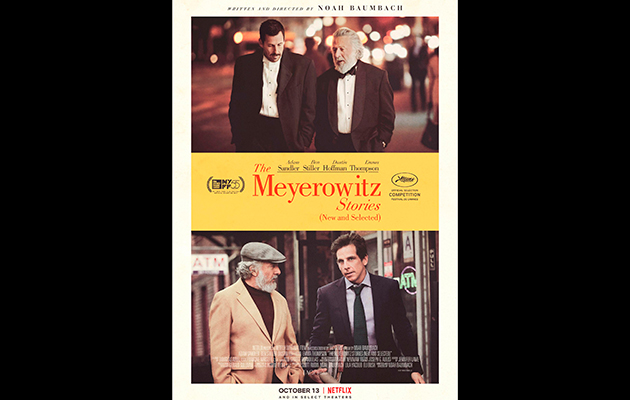 The action takes place in a ramshackle part of New York City; perhaps a corner of Greenwich Village which has yet to be gentrified. The focus is on a once-storied intellectual family whose overbearing patriarch has yet to comprehend that his career is on the wane; meanwhile, each of the family’s neurotic children harbour petty grievances against once another and also their parents. There is betrayal, failure and potential disaster before, finally, some kind of resolution takes place.

On paper, at least, Noah Baumbach’s latest project The Meyerowitz Stories (New And Selected) – available on Netflix from October 13 – recalls the filmmaker’s breakthrough film, 2005’s The Squid And The Whale. Instead of Jeff Daniels’ insufferably pompous novelist, we have Dustin Hoffman as a prickly, conceited sculptor; while Baumbach’s earlier film focused on a callow 16 year-old and his precocious younger brother, this new film is filtered through the experiences of older siblings, the likeable, underachieving musician Danny (Adam Sandler) and the unlikable, overachieving accountant Matthew (Ben Stiller). This time, there is a sister, the seemingly dour Jean (Elizabeth Marvel), whose own traumas are not revealed until late in the game.

Regular followers of Baumbach’s film will also spot assorted themes that recur throughout the filmmaker’s crisp body of work. In its depiction of quarreling siblings, it is as bilious as Margot At The Wedding. Elsewhere, it throws highbrow references around with the charming abandon of Mistress America: one marvelous set piece takes place during a sculpture exhibition at MoMA, while a painting sold to the Whitney Museum some years previously becomes a point of repeated irritation to Hoffman’s Harold. There are broader comparisons, too – to JD Salinger’s Glass stories, Jonathan Franzen’s The Corrections (Baumbach worked on a pilot for HBO) and Wes Anderson’s The Royal Tenenbaums.

For all its familiar strokes, The Meyerowitz Stories (New And Selected) is one of Baumbach’s best. Stiller – on his third film with Baumbach – finds ways to subtly endear us to Matthew. Sandler, meanwhile, is superb as both fretful son and doting father, delivering a performance of comic precision that’s arguably his best work since Punch Drunk Love. Hoffman, meanwhile, is as you’d expect as the rambling, cantankerous pater familias. There is strong work from Marvel and – in an amazing piece of casting – Emma Thompson as Harold’s florid current wife. Camoes abound – Adam Driver, Candice Bergen, Rebecca Miller and Judd Hirsch – though it is the three male leads who dominate, particularly Sandler.