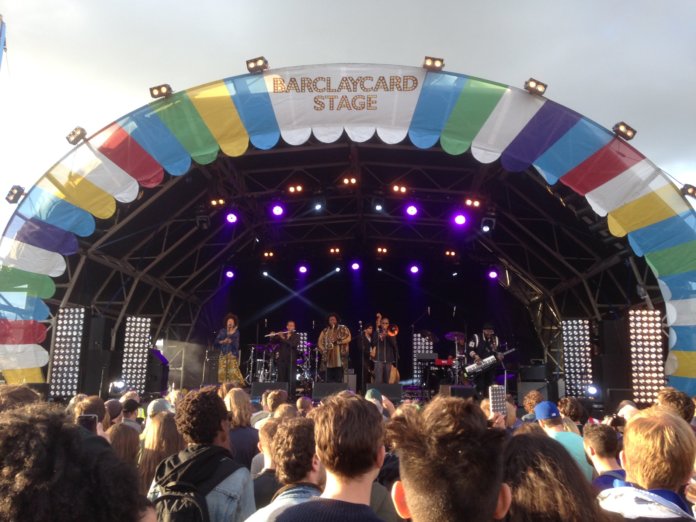 It is nine days after at least some of the people of Britain choose to leave Europe. Uncertainty is rife, domestic as well as international politics appear to have entered a grotesque post-factual phase, and musical respite would be hugely welcome. On the face of it, a rapper who observes, deep into “These Walls”, that “race wars happening”, might not be the most obvious escapist choice. Kendrick Lamar, after all, has spent the past few years assiduously documenting the iniquities suffered by impoverished, marginalised communities in America. In the wake of a horrific spike in the number of racist incidents reported in the UK, it seems possible that his set in London’s Hyde Park will feel more like a fractionally-adjusted news report than a holiday from reality.

In truth, Lamar is far too complex and potent a performer to be understood in such reductive terms. For an hour, he packs great tranches of learning, wit, politics and rage into the smallprint of his raps, then delivers them in dense and vivid narrative skrees. These are the texts which helped place To Pimp A Butterfly in the upper echelons of 2015’s myriad Album Of The Year polls, not least the one in Uncut. They are not, however, the only weapons in his armoury. Like so many black radical performers before him – Curtis Mayfield, Sly Stone, George Clinton, Erykah Badu, D’Angelo, for a start (and he deserves to be judged in that company) – Lamar understands that hurt can be combined with showmanship and musical nuance, and that the resulting blend can have great empowering and celebratory potential.

For those who remain sceptical about contemporary hip-hop’s place in an epic musical continuum, Lamar’s set also offers a timely corrective. When his band The Wesley Theory arrive on stage in the late afternoon (they are the notional support act on this Barclaycard British Summer Time bill, just beneath Florence & The Machine), they begin with a limber jazz-funk instrumental that sounds as if it could’ve been a Crusaders offcut. In fact, subsequent research reveals it to be a discreet version of Earth, Wind & Fire’s “Can’t Hide Love”.

Lamar himself arrives a couple of minutes later, nonchalant in a Boy London sweat and ripped jeans. When he reaches the centre of the stage and drops his mic into its stand, the band stop playing with uncanny precision. Now, he pauses to stare coolly and silently at the crowd for what seems an audaciously long time, and immediately the session’s ground rules are established: control and command.

The band might not include the marquee jazz musicians like Thundercat, Terrace Martin, Robert Glasper and Ambrose Akinmusire who invigorated so much of To Pimp A Butterfly; one of them, saxophonist Kamasi Washington, is preparing to play his own set on the other side of the festival site. Nevertheless, The Wesley Theory can kick up a fearsome avant cacophony on the opening “For Free”, a suitably freestyle backing for Lamar’s poetics, at this point equal parts Gil Scott-Heron and Ken Nordine. Sheet metal guitar blasts also add rabble-rousing punctuation to some of the selections from 2012’s Good Kid, M.A.A.D City like “Backseat Freestyle” and “M.A.A.D City” itself, the song’s two distinct parts played separately, and in reverse order.

They are most comfortable, though, with the deceptively lugubrious, roomy grooves that allow most space for Lamar’s verbal pyrotechnics. Sometimes – on the outstanding “These Walls” and “Money Trees” – these provide a considered, historically resonant update on the lope of G-funk. While other songs are mashed and abbreviated to pack in as much action as possible into a tight festival set, Lamar lets “These Walls” and “Money Trees” run in full, allowing his words to linger a little more poignantly.

Given an extra ten or 15 minutes, you’d hope he would go into more abstracted territory, into the sort of strung-out meditations that surfaced on this year’s valuable set of offcuts, Untitled Unmastered. But for the most part, modernism is delivered in a similar fashion to how Lamar delivers his political insights; in overwhelming torrents. By the end and “Alright”, the filigree jazz funk has been diced into martial surges, and Lamar is exhorting the crowd to jump with him, and turning a song of hope and doubt into one of triumphal consolation. He exits briskly, as the refrain of Boris Gardiner’s “Every Nigga Is A Star” reverberates around Hyde Park.

Although his music is more conventionally rooted in jazz, and predominantly instrumental, Kamasi Washington’s set taps into a similar spirit. “Our love, our beauty, our genius/Our work, our triumph, our glory,” Patrice Quinn sings on “The Rhythm Changes”, but the song’s momentum shifts live, from the languid supper club hit on Washington’s 2015 blockbuster The Epic, into something driven by two drummers hammering breakbeats, creating a much more forceful piece of music with explicit affinities to hip-hop. This is very much the vibe throughout Washington’s ecstatic 45 minutes, as “Change Of The Guard” and “Askim” are reborn in intense new forms. The former is especially supercharged, transformed into a call-to-arms that operates somewhere between peak Funkadelic and Archie Shepp’s impassioned Attica Blues. There’s a sense that Washington’s infectious energy has caught one of those rare moments when jazz – helped of course by the efforts of Lamar – can occupy a place adjacent to the mainstream; or at least the open-minded European festival circuit, for one rewarding summer, in spite of everything.

Kendrick Lamar, meanwhile, heads straight back to the States. Two days later, he plays a July 4 barbecue at the White House, and President Obama applauds Lamar and his fellow performer Janelle Monae for being “amazing artists… but they’re also very conscious about their responsibilities and obligations.” It is unclear whether “Institutionalized” – “If I was the president I’d pay my mama’s rent… Lay in the White House and get high” – is performed. By the end of the week, the climate of violence towards black people in America has escalated to what feels like new and awful heights, and a former congressman briefly tweets, “This is now war. Watch out Obama. Watch out black lives matter punks. Real America is coming after you.” This, if it really needed spelling out any more explicitly, is the world which Lamar has to navigate, and to somehow reconcile with his superstar privileges. As he articulates on “Hood Politics”: “While my loved ones was fighting a continuous war back in the city/I was entering a new one.”