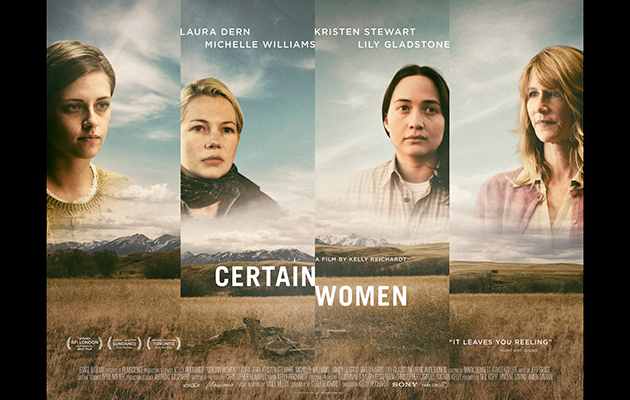 In her 2010 film, Meek’s Cutoff, the director Kelly Reichardt tracked a small band of settlers travelling across the Oregon High Desert in the 19th century. Among other qualities, Reichardt shot landscape incredibly well – the browns and ochres of the scorched Oregon trail, the bleached out sky.

It is a skill she has repeatedly demonstrated with great success. 2006’s Old Joy found two old friends Kurt (Will Oldham) and Mark (Daniel London) on a camping trip in the Oregon wilderness, while in 2008’s Wendy And Lucy, a young woman played by Michelle Williams drifted through Oregon and Washington on her way to Alaska. The opening shot of Certain Women watches a train moving slowly through the snowy Montana countryside and once again demonstrates Reichardt’s awareness of powerful rural surroundings.

Certain Women is adapted from three loosely interwoven stories by Maile Meloy, the older sister of The Decemberists’ Colin Meloy. These are melancholic vingnettes that unfold under Montana’s flinty, unforgiving skies.

In the first, Laura Dern plays Laura, a lawyer whose client (Jared Harris), a disabled construction worker, takes the law into his own hands. In the second, Ryan (James Le Gros) and his wife Gina (Michelle Williams, a Reichardt regular) weather a difficult time in their marriage while trying to build a new home – literally – in the wide open spaces of Montana. In the final section, a Native American rancher named Jamie (Lily Gladstone), who is drawn to Beth (Kristen Stewart), her teacher at an adult education class.

In each of these stories, Reichardt illustrates how these women have become world-weary after years of misogyny and frustration. These are all understated pieces, but like the performances they are intensely felt. Gladstone and Stewart, in particular, deliver exemplary work.

Certain Women is released in the UK on March 3