There is a song on "Aerial", Kate Bush's eighth and possibly best album, called "Bertie". "Here comes the sunshine," it begins, "Here comes that son of mine/Here comes the everything/Here's a song and a song for him." Nine years later, here, perhaps is a show for him: an unexpected comeback; a ravishing absurdity; a launchpad for his theatrical aspirations. Our pleasure may, to some degree, be collateral. 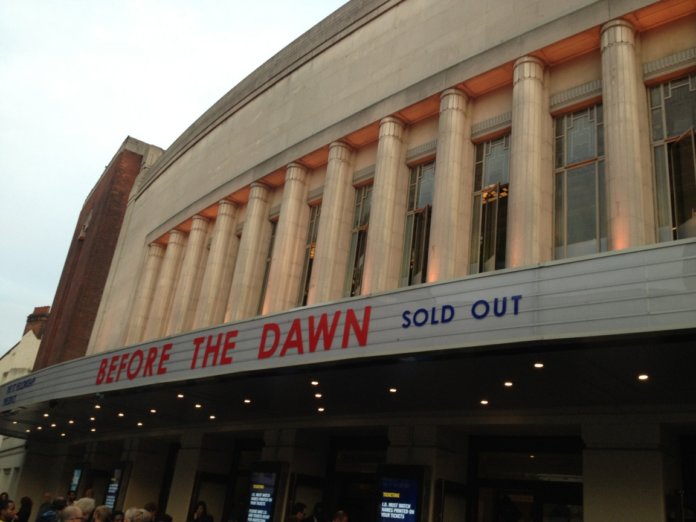 There is a song on “Aerial”, Kate Bush’s eighth and possibly best album, called “Bertie”. “Here comes the sunshine,” it begins, “Here comes that son of mine/Here comes the everything/Here’s a song and a song for him.” Nine years later, here, perhaps is a show for him: an unexpected comeback; a ravishing absurdity; a launchpad for his theatrical aspirations. Our pleasure may, to some degree, be collateral.

Why has Kate Bush come back now? The best response to such a question might well be, Why not? The cod-psychoanalytic one, unsteadily based on an interpretation of the second half of her career being dominated by the demands of parenthood over art, is that Bush’s return to the stage after 35 years is one more immensely generous act of maternal love. Bertie McIntosh, now 16, is the Creative Advisor of Before The Dawn, and its male lead. He has the largest speaking part in Bush’s first gilded song cycle, “The Ninth Wave”, and the starring role in her second, “A Sky Of Honey”. He even has a new song to sing by himself, “Tawny Moon”.

“Without my son, Bertie, this would never have happened,” Bush writes in her meticulous programme notes (“I love detail,” she notes, unnecessarily). “He is a very talented actor and beautiful singer, as you will be witness to, and he brings something very special to the show through his presence.”

Bush credits her son for, among other things, helping her conquer the stagefright that has reputedly kept her offstage since 1979. As the second night of Before The Dawn begins, though, either those nerves have been resoundingly conquered, or her acting abilities are more subtly effective than the broader strokes might sometimes suggest. The first song is “Lily”, from 1993, carrying Bush back into the spotlight with an elegant groove, where she can proceed with an air of glowing inclusivity, arms outstretched in beatific welcome.

Gabriel is before her, Raphael behind her, Michael to her right and Uriel to her left, and the seraphic horde hover over the whole performance: “Put me up on the angel’s shoulders,” she sings early on in an exceptional “Top Of The City”. Much, much later she will don wings and ascend into the darkness at the climax of “A Sky Of Honey”, then reappear at the piano to sing “Among Angels”.

After that song, and before a final rousing “Cloudbusting”, Bush steps out of character to make a short but heartfelt speech. In it, she thanks the audience for not capturing the vivid, sometimes daft, frequently transcendental three hours that preceded it on their phones. It is, she tells us, about people, not technology. It is also, sceptics might add, about preserving the magic for an eventual DVD release.

But still, for all the discipline of the audience, it would have taken some effort to have avoided the ecstatic blitz of reportage that greeted the first night of Before The Dawn. At a time when surprise album releases and liveblogs create Twitterstorms that can blow out in the space of a single playback or performance, what happens on the second night, when the element of surprise has been removed? When you briefly consider advising a frustrated paparazzo, sated by Lily Allen at the premiere, that Jeanette Winterson has just joined the queue to get into Hammersmith Apollo?

What happens, perhaps, is that you can concentrate a little more on the rapturous music, and circumnavigate the dazzling light design, the West End manners, the wooden puppet that wanders rather forlornly through the seven-piece band for much of “A Sky Of Honey”. Bush’s strategy is as cunning and artful as might be expected: a warm-up session of half-a dozen songs; a full dramatization of the “Ninth Wave” suite from “Hounds Of Love”. Then, after the interval, the second disc of “Aerial” (the “Sky Of Honey” sequence) and a couple of symmetrically resonant songs for an encore.

Some of the “Sky Of Honey” songs have a vintage Balearic swish to them, so that an outstanding “Sunset”, in particular, feels like the work of some classy musicians of a certain age enjoying a “Café Del Mar” compilation after dinner in the countryside. Mostly, though, Bush’s aesthetic has remained miraculously unchanged since 1985, and “Hounds Of Love” (she plays all but two songs of that album in Before The Dawn, and nothing predating it). One of her keyboardists, Kevin McAlea, actually figured on 1979’s Tour Of Life, while other bandmembers include David Rhodes, John Giblin, Jon Carin and Omar Hakim, auspicious session vets who have long moved in a world populated by Peter Gabriel, Pink Floyd, Simple Minds, Dire Straits and Barclay James Harvest.

With that aforementioned attention to detail, Bush, the seven-piece band and five backing singers (including Bertie McIntosh), set about recreating the sound of the original records with phenomenal accuracy. The opening six songs move with a steady relentlessness, a mellow funk, a precise digital rendering of those glassy Fairlight epiphanies, and provide Bush with a calm base to display the still-astounding potency of her voice. The rearing climaxes of “Top Of The City” are delivered with grace and soul as well as power, while juxtaposing “Running Up That Hill” with “King Of The Mountain” proves that, in another time, the latter could well have been as significant a hit as the former.

Throughout, too, there’s ample evidence of how Kate Bush and her music sometimes bewilderingly transcend context and prejudice. For as those musicians’ CVs prove, here is someone immersed in a shiny world where the virtuosity of prog-rock met the perfectionism of a then-new studio culture, where the ’70s met the ’80s; not a world which, traditionally, has received unwavering critical love.

Bush, of course, is too much of an idiosyncratic talent for these immaculate textures to be rendered sterile. The range and vigour of “The Ninth Wave”, in particular, highlights how she inhabits – defines, even – that most rarefied of genres, feminised prog. Even without the spectacle which accompanies it, the radically expanded “Ninth Wave” is a masterclass in extended musical writing, in threading flights of fantasy into a more or less coherent narrative, and in finding an emotional valency – one which, more than ever, focuses on a love of family (the benedictions of “The Morning Fog” are particularly moving) – in something which initially appears outlandish.

The staging of “The Ninth Wave”, Bush’s tale of a shipwrecked woman’s fight for life in the sea, involves filmed segments, a helicopter hovering over the audience, dancers adorned with fish skeletons drawing the victim to her doom, stern recitations from the singer’s brother, John Carder Bush, tragi-comic dramatic interludes, and some remarkable visual tableaux. The sight, during “Hello Earth”, of Bush clambering onto a buoy undulating amidst fabric waves, lit by red flares, is one of many enduring images in Before The Dawn.

Those of us averse to the stagecraft of West End musicals may, however, find other sections a little tougher to deal with. The mime involving a stereotypically fiery preacher during “Waking The Witch”, for instance, or the long, stilted dialogue between McIntosh (as the drowning woman’s son) and backing singer Bob Harms (as her husband) written by the novelist David Mitchell. As an illustration of how banal domesticity can be fractured by disaster, it makes sense. As a vignette that depends on lines like “HP and mayo, it’s the badger’s nadgers” for laughs, it leaves something to be desired.

Pretty much from the beginning of her career, Kate Bush has presented herself with uncommon success as the full artistic package: a multi-dimensional, multi-disciplinary conceptual artist whose genius cannot be reduced, as many recent thinkpieces have recently tried, to a detail about how many costume changes she went through on the Tour Of Life. The heretical thought does occur during Before The Dawn, though, that her desire to visualise and dramatise most every aspect of her music can sometimes detract from its inherent quality.

There’s a good argument to be made, for instance, that “A Sky Of Honey” is one of Bush’s very best pieces of work: its inclusion in Before The Dawn implies that she would agree, and the way she performs these delicate and sophisticated songs with her band only emphasise the point. In the programme notes, though, she admits “I really struggled with the staging for this for a while… What was the action on stage to be?”

It’s an anxiety of creative vision that seems out of character, but one which is reflected in the performance, with Bertie McIntosh taking Rolf Harris’ old role as the painter, moving uncertainly around the stage while his fellow vocalists strut awkwardly in bird masks and that odd wooden puppet, a manifestation of the artist’s model (“Piss off!” orders McIntosh), is left to mooch aimlessly in search of the occasional hug from Bush. The gorgeous Turner-style sunsets and slow-motion bird films would, perhaps, have sufficed.

The music, though, remains magnificent, at once meditative and pulsating, working its way from quasi-ambient piano studies, through birdsong and the wonderful choreographed informality of “Sunset”, to the pumping abandon of “Nocturn” and “Aerial” itself, and the salient cry of “We become panoramic!”

After all that, a solo piano interlude of “Among Angels” provides a tantalising glimpse of an alternative way that Kate Bush could have made her comeback: one more musically pure, perhaps, but also one which would have only represented, for better or worse, one strand of her essence. Before The Dawn is a celebration of the sublime and the preposterous, of a talent returned to the stage after a confoundingly epic length of time, and also, critically, of the consolations and inspirations of family. Love, it transpires, can make you do the strangest things – for 22 nights. Come on Joe, you’ve got 20 more shows to go…

A couple more deep Kate Bush things for you to read here:

“This girl is very, very tough…” The untold story of Kate Bush’s Hounds Of Love

Album By Album: Kate Bush’s closest collaborators talk us through her greatest records

And of course, please let me know what you think of Before The Dawn: uncut_feedback@ipcmedia.com