What strange music Jack White makes these days. At the end of this hot, compelling, tempestuous show, he stands triumphantly on a monitor, guitar held high above head like the hammer of Thor, every inch the conquering stadium rocker. 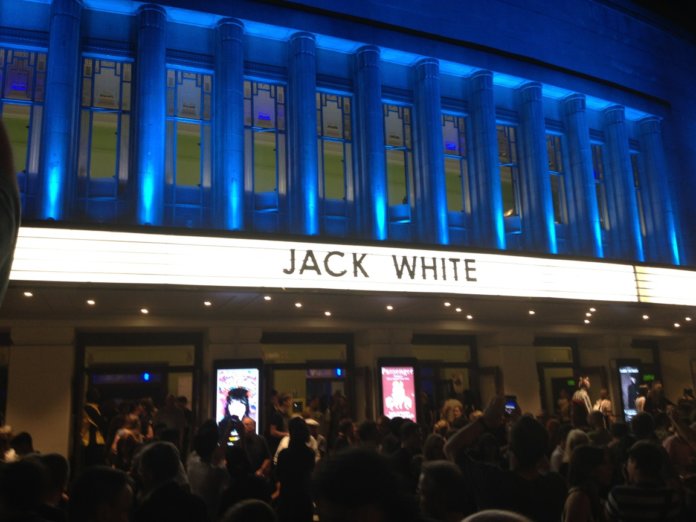 What strange music Jack White makes these days. At the end of this hot, compelling, tempestuous show, he stands triumphantly on a monitor, guitar held high above head like the hammer of Thor, every inch the conquering stadium rocker.

The guitar, though, is a battered acoustic one, and the music White has hurtled through for the past two hours is far from straightforwardly anthemic, subject as it is to weird currents, radical combinations, an overarching vision that is at once baroque and agitated. How on earth did that garage rock guy, the one with the sister, get here?

Jack White’s secret – one of his secrets, God knows he must have enough of them – may be something to do with a volatile psychological mix of ambition in its most grandiose and ruthless form, and a desire to subvert expectations that can swing perilously close to self-sabotage. During a lengthy encore, he and his five-piece band deconstruct the elegant powerpop of “Steady, As She Goes” and rebuild it with a heavy new menace. The fluent melodiousness of the Raconteurs’ original currently seems to have little use for White, who breaks the song down into a fragmented, staccato prowl, knocking it off balance time and again as he and his bandmates take short and often jarring solos.

Most everything here is tense, indignant – even “Love Interruption”, sung with fiddler Lillie Mae Rische, has a rowdy intensity – predicated on a short fuse. It fits neatly with the persona that White is projecting in recent interviews; the lone superstar, wounded and self-righteous, embracing a role akin to that of anti-hero. Swigging champagne from the bottle, spinning semi-intelligible yarns about Mariah Carey, turning most of his songs into bigger, more fraught and priapic creations, White’s love of puzzles and tricks is now sometimes tantalisingly close to antagonism. A divisive rock god of unstable morals, toying with the expectations of his fans and the fabric of his music.

The thing is, most of White’s provocations come off. Dubious new genres are minted at speed, so that “Just One Drink” and “Alone In My Home”, two of the more straightforward tracks on “Lazaretto”, are amped up into a kind of preposterous pomp honky-tonk, with drummer Daru Jones throwing funk breaks into the latter for good measure. Among a notably kinetic band, Jones is a focal point front stage left, too restless to stay on his stool for long, and occasionally behaving like a man who would be happiest with an entire kit of cowbells.

“Lazaretto” itself, meanwhile, very much resembles a rap-rock hybrid made by someone who loves rock, and rap, but has never actually heard any rap-rock before, and consequently comes to it with an innocent delight in the cleverness of his invention. It’s a stunt White’s clearly enamoured with, and so the likes of “Missing Pieces”, the Dead Weather’s “Blue Blood Blues” and even the Raconteurs’ “Top Yourself”, monstrously strung out in this incarnation, find the outraged cadences of White’s vocal melodies pushed even closer to the rhythms of hip-hop.

The show opens with a climax – the curtain pulled aside to reveal White, theatrically buffeted by the force of his guitar playing, and his bandmates in the midst of a cacophonous ending, and it’s this spirit of excess and bombast which dominates, even on vintage White Stripes nuggets like “Astro”. As that song ends, and the brutal lurch of “Dead Leaves And The Dirty Ground” begins, White’s guitar riff is doubled, tripled, even quadrupled by his bandmates on steel (Fats Kaplin), fiddle (Rische) and organ (Ikey Owens, playing with the same demented fusion of Booker T and Jon Lord that he brought to early Mars Volta shows). Time and again, the bullishness of White’s playing is underpinned with more spectral elements – Rische and Kaplin switch between mandolins, fiddles, steel and theremin – so that even the most straightahead big rock songs like “You Don’t Know What Love Is” are given a brittle subtext.

It’s another way in which White creates a destabilising undercurrent, a sense of the unpredictable that is sustained in spite of the meticulously arranged and drilled nature of the band. Perhaps the waywardness is necessarily anchored in stability: the two bands, one male and one female, that White dragged around the world to support “Blunderbuss”, have been scrapped. For this year’s manoeuvres, the male lineup has been retained and augmented by Rische from the distaff troupe. The switch means White has one less schtick (he wouldn’t tell the bands which one was performing until the day of the show) in his armoury, but it also endows him with a band who’ve grown tour-hardened and flexible, who can draw on a richer and wider repertoire and cut loose when the need arises.

That need, it transpires, arises quite often. If the early “Blunderbuss” shows found an uncharacteristically cautious, understated White at work, tonight’s performance has some of the chaos and flux of the wilder nights of The White Stripes. The wired vibes recall a night at the Alexandra Palace in 2006, when much impatient and brilliant song-mangling climaxed with a denunciation of some perceived misquotes in that week’s NME.

Here, songs collapse into one another, others (“Hello Operator”) are handed over to the audience to sing, and tunes are brusquely cut and shut into one another: a gothic, windswept back and forth between Hank Williams’ “Ramblin’ Man” and the White Stripes’ “Cannon” is especially deranged. There is even a brief, apocalyptic version of The Dead Kennedys’ “Holiday In Cambodia”, prefacing a long “Ball And Biscuit” which logically showcases how White, unlike at those early “Blunderbuss” shows, has clearly reconciled himself to the explosive joys of the guitar solo.

Amidst all the carnage, though, other possibilities present themselves. The splutter and thrust might predominate, but it’s significant that the best songs on “Blunderbuss” and “Lazaretto” are the grand romantic dramas, the ones with cascading pianos and red-raw passions. In the maelstrom, “Would You Fight for My Love?” is a swirling highlight: still charged (Daru Jones drives it an unstintingly hard pace), but with a space and grace that this powerful, exciting, ornately messy show sometimes lacks. As Rische provides backing wails, White appears consumed by his work, orchestrating his bandmates through the swells and currents of his tremendous song. The mood is desperate, imploring, but the lyrics tell a different story. “I know that you want more,” he sings, “But would you fight for my love?” And the message is clear: if we want Jack White as our hero, he will entertain, but not pander. We have to accept all his flaws, whims, caprices and manias as a critical, sometimes uncomfortable, part of the contract.

And here are some links to other things I’ve written about Jack White in the past:

A long interview around the release of Blunderbuss

A piece about Blunderbuss

The Raconteurs, Hammersmith Apollo, May 2008

The Raconteurs, Consolers Of The Lonely