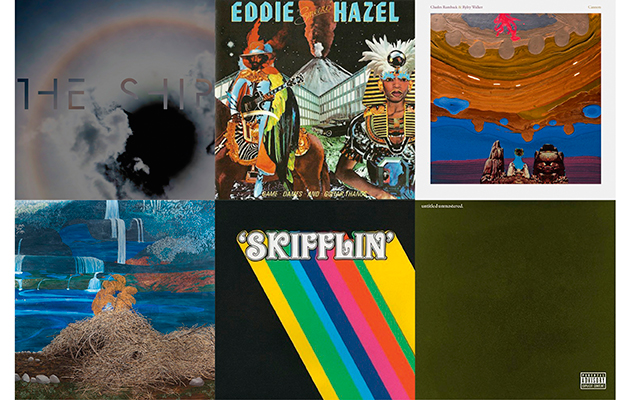 I figured it was time again to round up a few records I’ve enjoyed these past few weeks, beginning with one you probably already know: Brian Eno‘s “The Ship”, an album that could be usefully retitled “Ambient 5: At Sea”. It’s been five years since Eno last worked with either Coldplay or U2, and, perhaps unencumbered, his own solo career has taken a concurrent upturn. 2012’s “Lux” stands as one of his finest environmental works, and “The Ship” successfully combines – surprisingly for the first time – his ambient and song-based work. Though Eno denies as much in a recent Uncut interview, Gavin Bryars’ “Sinking Of The Titanic” is a clear antecedent for these grave meditations on war and sea; micro-detailed, ebbing constructs that have significant cumulative force. Eno’s rarely sung better, too. A cover of the Velvets’ “I’m Set Free” exposes the song’s innate spirituality, joining the dots between Eno’s art-rock roots and his latterday private obsession with gospel music.

Compared with the elegant structural conceits of “To Pimp A Butterfly”, the chant of “Pimp Pimp Hooray!” which recurs throughout Kendrick Lamar‘s “Untitled Unmastered” feels a little half-baked. Nevertheless, it’s typical of Lamar’s artistry that even a compilation of offcuts comes formatted and conceptualised. The themes and musical textures remain consistent with last year’s masterpiece, as Lamar nimbly works through more complex equations of race, faith and fame over a soundbed informed by jazz, nu-soul and the abstract hip-hop of semi-forgotten outliers like Anti-Pop Consortium. “Untitled 03” and “Untitled 06”, meanwhile, suggest this wise and brilliant music was excluded from the original album due to constraints of time and space, rather than quality.

Not long ago, prepping for a UK tour with Danny Thompson, Ryley Walker told Uncut that his next album would be “less of a guitar record”, influenced instead by Talk Talk, American Music Club and “Sketches Of Spain”. “Cannots” is not that album, being instead another duet detour to file alongside Walker’s 2015 set with Bill Mackay. Charles Rumback, who gets co-billing here, is a Chicago jazz drummer, very much Billy Higgins to Walker’s Sandy Bull on these five instrumentals (or John Truscinski to his Steve Gunn, for a more recent analogue). As ever with Walker, though, his visceral engagement with the music means that he transcends mere homage, either on flighty acoustic improvisations like “River Limmat”, or on the title track’s slugging blues, where Rumback flutters around the guitarist’s palpably blitzed virtuosity.

Always something of a free spirit, Cass McCombs‘ career choices of late have been enterprisingly capricious, even by his own standards. Collaborations with Phish’s Mike Gordon and the Soldiers Of Fortune suggest a move into jamming circles, loosely confirmed by The Skiffle Players‘ “Skifflin'”, a low-key and frequently gorgeous new project. Latterday cosmic cowboys from the Dead diaspora, the CRB (notably Neal Casal) and the Beachwood Sparks fill out the Skiffle Players, on sessions that take in grooving folk refits (“The Coo Coo Bird”), New Orleans shuffle (“Michael Weikel”), Pink Floyd dreamstate (“A Star For You”) and, best of all, a sort of elevated hobo motorik (“Railroadin’ Some”). “I’m on my way, but I don’t know where,” sings McCombs pointedly, liberated once again.

One doesn’t normally think of a musician taking a road trip, indulging in a troubadourish chasing of the muse cross-country, when their instrument is a harp weighing 85 pounds. This, though, is the backstory to “At The Dam”, in which Mary Lattimore (sometime collaborator of Kurt Vile, Thurston Moore and Steve Gunn, and with another fine duo set with Jeff Zeigler imminent) takes her harp and laptop away from Philadelphia to Joshua Tree, the mountains east of LA and the hippy enclave of Marfa, Texas. Not for Lattimore the Celtic and African flourishes of Joanna Newsom: her instrumentals have an improvised but quasi-ambient serenity, the likes of “Jimmy V” delicately adjusted by the odd electronic tweak. A much-devalued word – and probably one the creator despises – still seems apposite for this lovely album: ethereal.

“It’s definitely an unusual thing to take on a road trip, like a giant pet,” Lattimore told me recently, ” but it’s just part of life now. My mom has been a professional harpist for years, so I’ve watched her move it around since I was a kid.

“Recently I got interviewed for a public TV show and they wanted to get a shot of me lugging the harp up the stairs, awkwardly, and I thought, shit, that’s totally not necessary, it’s just promoting a cliche that it’s a cumbersome, impractical classical instrument. It’s not flattering, that shot. It’s not a jokey kind of old-timey thing, like wheeling a piano down the street to a cartoon soundtrack. It’s a normal, real instrument that just happens to be tall. If the harpist isn’t a delicate flower about it, it’s no big deal. I think the thought that it’s too weird and heavy discourages people from getting into playing it and that’s too bad – drummers have a million different parts to carry around, it just goes with the territory. I want this instrument to be not so alien in 2016.”

Finally, a vinyl reissue for an album that I’ve been hunting for years: Eddie Hazel‘s “Game, Dames & Guitar Thangs”. For a long time, the Funkadelic guitarist’s one official solo album was something of a holy grail for record collectors. According to the not-entirely infallible Wikipedia, a 1994 TV episode of Homicide: Life On The Street pivoted on the shooting that followed a treasured copy being destroyed.

In truth, “Game, Dames & Guitar Thangs” isn’t quite that desirable, being a jam-heavy high in the erratic stretch of Hazel’s career between Funkadelic’s peerless “Maggot Brain” in 1971, and his death in 1992. Waywardness and addiction did not adversely affect the guitarist’s virtuosity, as the ornate, easy-going freakouts on the themes of “California Dreamin'” (in two versions) and “I Want You (She’s So Heavy)” (blissed-out where the Beatles were brutal) prove. George Clinton co-produces, the mighty “Wars Of Armageddon” is revisited, loosely, for “What About It?”, and staunch Mothership footsoldiers Bootsy Collins, Garry Shider, Bernie Worrell, the Brides Of Funkenstein et al are all present and correct. But for all the psychedelic Egyptology and Afro-futurist imagery on the sleeve, the lack of a palpable overarching vision leaves it mildly frustrating. A little short, then, of the solo masterpiece that Hazel’s acid virtuosity deserved.