In praise of Playing With Fire by Spacemen 3 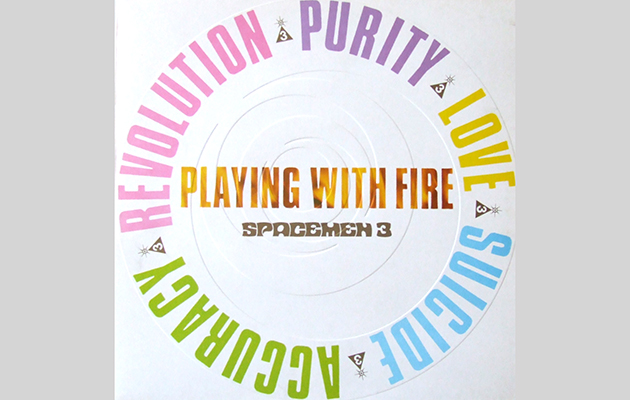 In Playing The Bass With Three Left Hands, his superb memoir of his time as a member of Spacemen 3 and Spiritualized, Will Carruthers remembers his first interview and photo shoot for a music magazine. It was, it transpired, illustrative of the band’s general behaviour. The interview took place in the bedroom of his flat in Rugby; also present were his Spacemen 3 co-conspirators, Peter Kember (aka Sonic Boom) and Jason Pierce. “Pete did all the talking, while me and Jason just sat there saying nothing,” Carruthers writes. “Pete handled the press fairly well. He talked about drugs quite a bit, and we were fine with that too. When the photographer took the photos, I was completely stoned on hash and wine. All the way through the photo session, the cameraman kept saying, ‘Just try to open your eyes a bit more.’ I suppose we looked a bit stoned.”

The photo eventually also appeared on the rear sleeve of 1988’s Playing With Fire, the band’s third album and first to feature Carruthers. Playing With Fire was a creative highpoint for the band: a moment where the combative psych-metal of the band’s earliest recordings had been replaced by more delicate, elliptical textures. If the early albums – Sound Of Confusion, The Perfect Prescription – channelled MC5, the 13th Floor Elevators and the Cramps, by the time they came to record Playing With Fire, Spacemen 3 were drawing from a more diverse, exploratory pool of influences including John Cage, Steve Reich, the Velvet Underground and Kraftwerk. Although the album satisfyingly hits a number of marks – the way guitars on “Honey” are processed to make them resemble synthesizers, the soft-focus melodies pillowing “Come Down Softly To My Soul”, the enveloping minimalism of “How Do You Feel?” and the 11-minute, two-chord guitar drones propelling “Suicide”. 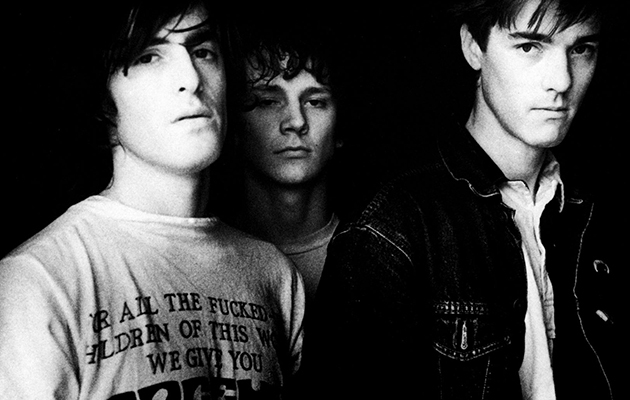 “The band was slowly starring to split up, and although it didn’t become common knowledge until later on, it was happening,” Kember told me in 1999. “It was a lot less collaborative than the two previous records. Half the band had just left – the bass player and drummer had left, or to be honest, the drummer had left and we’d kicked the bass player out. We went off to Cornwall with a new bass player [Carruthers] and initially no drummer to start recording the album. We had some weird deal in the studio where we had run of the place – it was this converted cottage in the middle of nowhere, which was very pleasant, very out of the way – but we kind of fell out with the guy who was looking after the place. The recording equipment was a bit primitive, so we ended up having to rerecord parts of it when we got back to Rugby.”

“We started recording in Cornwall,” Pierce told me in 2009. “It was quite a funky little house in the middle of nowhere. Kind of hippie, log burners… I’d never been anywhere like that. I’m from the town. Also, to be honest, I’d never really travelled, we never had money when we were kids. In Cornwall, we were sleeping on mattresses on the floor. But it only works if everyone gets on, and it was getting to the point with Pete where we couldn’t be in the same room together. He got crueller, and it was very hard to deal with, especially as we were in such a close scene. I’d started going out with Kate [Radley, future Spiritualized keyboardist], and Pete was so childish – ‘You can’t do that.’ It became miserable, but making this music was never about misery – there’s a beautiful sorrow, a beautiful longing about the music. Even in the more heavy-duty drones there was a kind of epiphany.”

Pierce subsequently finesse this notion of “beautiful longing” with his next band. “Lord Can You Hear Me?”, the closing track of Playing With Fire, is essentially a template for Spiritualized: gospel tropes, horns, religious imagery. Similarly, Kember continued to explore drones and longer, experimental pieces in Spectrum and E.A.R.

“It’s hard for me to be objective about my own songs, but certainly Jason’s songs on Playing With Fire are among the best he’s done,” said Kember. “We tried to be different here, but there were inherent limitations in our approach. If you’re writing two-chord songs, you have to work a certain way. It can be very restrictive, but that forces you to try harder to come up with ways to make the songs different.”

Playing With Fire demonstrates the high standard of the work Kember and Pierce achieved – if not entirely collaboratively, then at least within close proximity of one another. Piece had some views on the way their songwriting processes during this period functioned.

“‘How Does It Feel?’ was originally called ‘Repeater’, which is the sound a Vox Starstreamer makes: you hit the guitar and that’s what comes out of it, it plays itself. Pete put down this long repeater thing and then I constructed a melody over the top, and his claim was that it was his song, because he’d put down the original track. I joked that if you owned the tape, you owned the first part, so you could make this claim that I own the silence that the Starstreamer is going on to. I mean, you can’t make songs with people who are putting flags in them – saying, that’s my bit, that was my melody. We wrote songs together – no, we wrote songs and then we shared the credit. It doesn’t matter whose song it was, or who did the greater or the lesser part of it, it was just that was what you did. Done.”

“On Playing With Fire, Jason’s songs were minimal – both the songwriting and the amount of sound on tape,” said Kember. “When he’s good, he’s fucking amazing; when he hits the mark, he really delivers. There’s songs on Playing With Fire like ‘Lord Can You Hear Me?’ which can make me cry.”

The band recorded one final album, Recurring, where the divisions between Kember and Pierce were more pronounced. “People always point to Recurring and the fact my songs and Jason’s songs are on two different sides,” noted Kember. The end of Spacemen 3 was, as Carruthers’ documents in his book, a fairly bloody business. It’s a shame; but the way these things go. There is, at least, a fine body of work spread out across the band’s four studio albums (and, with Performance and Dreamweapon, two excellent live albums).

Spacemen 3 represented a particularly British kind of psychedelia. I don’t mean a Lewis Carroll-style whimsy, but something firmly rooted in Kember and Pierce’s experiences in the Midlands during Thatcher’s Eighties; a dank, urban misery marked by a withdrawal into drugs and a proclivity for inner flight. Accordingly, the band’s mesmerising effects, loops and drones felt just as mind-altering as the exploratory sounds of an earlier generation. Playing With Fire captures the moment where Spacemen 3 were at the top of their game: tuned in and, despite their pharmacopoeia of drug references, remarkably switched on.