In praise of Jim Jarmusch’s Paterson

Zen-like brilliance from the master 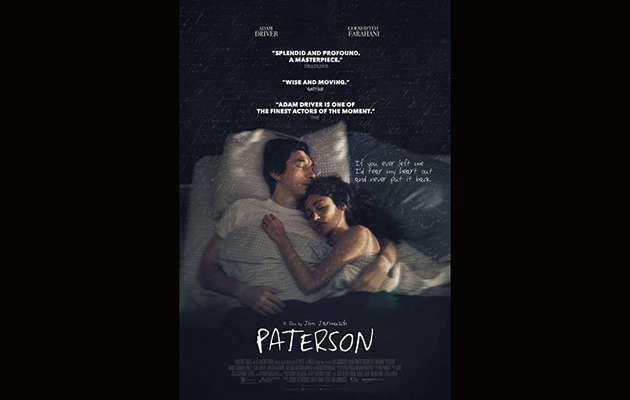 The last time we saw Adam Driver, he was driving a lightsabre through his father in the latest Star Wars movie. Thankfully, there are no such interstellar shocks here in Jim Jarmusch’s quietly unassuming portrait of a gentle, artistic man and his wife.

Paterson is a city in New Jersey; it is also the name of Driver’s protagonist, a bus driver and aspiring writer who, bound by the coincidence of his name, enjoys an almost karmic sense of cosmic connection to his hometown. As we learn, Paterson – the place – has yielded many more famous residents, from Hurricane Carter to Sam & Dave’s Sam Moore and 18th century anarchist weaver, Gaetano Breaxi. Paterson’s sense of civic pride is palpable, as each day he goes to work, drives his bus, listens to snatches of his passengers’ conversation on his bus and writes poetry during his lunch-break. One involves a paean to Ohio Blue Tip matches (“sober and furious and stubbornly ready to burst into flame”).

Jarmusch has had a terrific year – although his two projects released in the last 12 months may, superficially, not have been more different. On one hand, the Stooges film was high energy rock’n’roll; on the other, Paterson is a warm and uncynical in its celebration of small-town life and dreams. Yet, as Iggy Pop explains in Gimme Danger, the Stooges were the culmination of his small-town dreams. Although, admittedly, the end results are very different, perhaps there are similarities in the core of each story, after all.

Driver and Golshifteh Farahani as Paterson’s wife Laura are both superb: he is prone to philosophizing while she is loose and unaffected, embarking each day on a new artistic endeavour, from painting to baking and learning to play the guitar. The film is structured as a week in Paterson’s life, where each day is essentially repetitive – the plot consists of distractions from his routine: minor misfortunes and happy accidents, mostly, in which Paterson calmly truffles for meaning. Much like Forest Whitaker in Ghost Dog: Way Of The Samurai, Paterson is a zen-like spirit searching for deeper enlightenment in the every day.