Jerry Scheff is surely not an unfamiliar name to readers of Uncut. I’d wager a horse most of you have more than one album in your collection that feature him on bass. Among the highlights of a lengthy and illustrious CV, he can count gigs with Elvis Presley, The Doors, Bob Dylan, Elvis Costello, Todd Rundgren, Richard Thompson, Bette Midler, Crowded House, Johnny Cash, T-Bone Burnett, Roy Orbison, Suzanne Vegas and Jimmie Dale Gilmour. 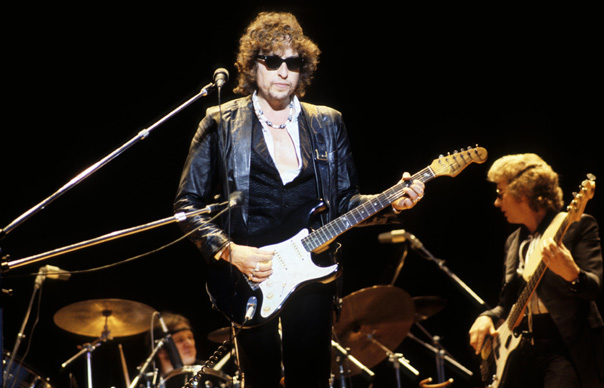 Jerry Scheff is surely not an unfamiliar name to readers of Uncut. I’d wager a horse most of you have more than one album in your collection that feature him on bass. Among the highlights of a lengthy and illustrious CV, he can count gigs with Elvis Presley, The Doors, Bob Dylan, Elvis Costello, Todd Rundgren, Richard Thompson, Bette Midler, Crowded House, Johnny Cash, T-Bone Burnett, Roy Orbison, Suzanne Vegas and Jimmie Dale Gilmour.

Scheff has stories galore about most of these people in his autobiography, Way Down: Playing Bass With Elvis, Dylan, The Doors & More (Backbeat Books), which I’ve been reading over the weekend just gone. A couple of his anecdotes about playing with Dylan especially stood out.

He joined Dylan’s touring band in May 1978, as a replacement for Rob Stoner, who’d been with Dylan since the Rolling Thunder tours. For unexplained reasons Stoner had suddenly found himself out of favour and been duly fired by Dylan. On June 1, Dylan as due to start a week-long run at the Universal Amphitheatre in Los Angeles, which didn’t leave him much time to learn the songs for the show.

In fact, as he recalls, barely half the set had been rehearsed when Dylan turned up one day and somewhat nonchalantly announced he’d written a batch of new songs he wanted to record, immediately. At which point, work on the live set stopped entirely and work on Street-Legal started, a mobile studio turning up not long after Dylan at the rehearsal studios where the album was recorded. This was an unscheduled interruption that meant when the band played the opening night of the LA shows, fully a third of the set consisted of songs the band had never played live together before, which seemed not to bother Dylan a proverbial jot.

A couple of weeks later, Scheff was with Dylan in London ahead of the month-long European tour that ended with Dylan headlining the Blackbushe festival. The band was staying at some plush place near Hyde Park. One night, Scheff got a call in his room. It was Dylan. He wanted to know if Scheff was a reggae fan, which he was. Meet me in the hotel garage and don’t mention it to anyone else, Dylan told him.

When Scheff turned up in the garage, he found Dylan at the wheel of a Mercedes he had stashed there, with backing singer Helena Springs and the band’s female percussionist, Bobbye Hall, already on board. Security around Dylan was usually pretty tight, but tonight Dylan had given them the slip and wanted to go to a club he knew to hear some live reggae and now drove the Mercedes there, parking, as Scheff remembers it, about a block away in what seemed to the bassist a rather rough-looking neighbourhood. Dylan then led them through darkened streets to the club.

“We could hear the music from outside,” Scheff writes. “It was almost as if the outer walls of the club were throbbing. We stepped into a room where a few people were sitting around in folding chairs against bare walls; the music, already loud, was coming from the other side of a closed door. In front of us was a ticket booth made out of raw plywood.

“Bob stepped forward and asked for four tickets. A guy in dreadlocks told him that you needed to be a member to gain entry, and that membership was £100 apiece. The band sounded great, though, and we were all getting turned on to what was happening on the other side of the door. Bob handed over £400. We had our hands stamped and in we went.”

What they found on the other side of the door: a room with no chairs or tables, the walls lined with speakers pumping out recorded music and a single couple swaying in the middle of a dance floor otherwise empty, apart from a wine bottle. Undaunted, but out of pocket by nearly a thousand dollars, Dylan, laughing, then headed to another club, possibly the old Venue in Victoria, where Link Wray was playing and Sid Vicious hove into view at one point brandishing a flick knife.

Years later, when Scheff like Stoner before him had been unceremoniously replaced in Dylan’s band, he was in the studio with drummer Jim Keltner. Keltner had himself recently been playing with Dylan and recalled his own sudden departure from Bob’s band.

One day at the end of rehearsals, Keltner remembered, Dylan had taken him to one side and asked: “Jim, what guitar players do you like? I’m not digging the guitar players.”

Loyal to his fellow musicians, Keltner told Dylan that he loved the guitar players they already had.

Dylan was silent for a moment then looked at Keltner.

Anyway, I need to get back to work on the issue we’re just finishing and then I’m off to Brighton for the Great Escape Festival. We’ll be at the Pavilion Theatre from Thursday to Saturday, so call by if you have a chance.