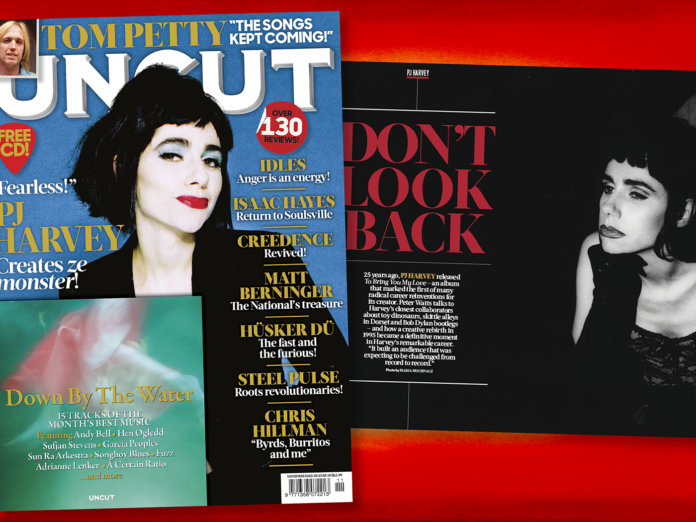 The new issue of Uncut – in shops now and also available to order online by clicking here – features a deep dive into the making of PJ Harvey’s 1995 album To Bring You My Love, the first of many radical career inventions for its creator. Peter Watts talks to Harvey’s closest collaborators about toy dinosaurs, skittle alleys in Dorset and Bob Dylan bootlegs – and how a creative rebirth became a definitive moment in Harvey’s remarkable career.

Towards the end of 1993, Harvey saw a student production of Hamlet, scored by John Parish, in Yeovil. An old friend, Parish first worked with Harvey in 1988, when she joined his band, Automatic Dlamini. The two stayed close and, after listening to her latest demos, Parish found himself working on Harvey’s first solo album.

“Polly had the arrangements very much in place already,” says Parish. “It was a case of trying to embellish what was already there, making it sound better and more engaging, enhance the strengths. The job on To Bring You My Love – as it often is with Polly – is identifying what you can take from a demo that, firstly, really works for the listener, who has no particular emotional attachment to the recording, and, secondly, what the artist loves about the song.”

To Bring You My Love was recorded during autumn 1994 at The Who’s old studio, Townhouse 3 in Battersea. Also present was co-producer Flood – real name Mark Ellis – who became another essential member of Harvey’s team. While the To Bring You My Love demos had been recorded at home by Harvey with keyboards, drum machine, guitar and vocals, they were typically strong and efficiently presented – she even had some of the string arrangements down pat. In the studio, however, such diligence caused problems for the musicians making the album, who struggled to add their own musical imprint.

Among them was American guitarist Joe Gore. “We met in a rehearsal place in London,” he recalls. “The first song was something like ‘Naked Cousin’. After we had finished, she and Flood looked a bit downcast. I had been playing very gung-ho and it soon became clear that what she wanted to hear was what she put on the demos. The process was, ‘Can you play it more like I played it?’ Everything I was playing was not leading to happiness. I had just discovered this fabulous fuzz pedal and brought three over for me, John and Polly. There was silence before Flood said drily, ‘Well, Norman Greenbaum has arrived.’ It was not a compliment.”

Gore now thinks that Harvey was using the record to step away from her old role as a guitar player in favour of becoming more of a frontperson. His job was to be what he describes as “her prosthetic guitar hand… At this point, she was focused on being a frontperson. She was taking dance lessons and wanted to be a commanding frontperson who didn’t have a guitar strapped to her.”

Having played with Tom Waits, Gore had acquired a knack for the weird and the scratchy. On “Working For The Man” he played guitar through a toy plastic amplifier miked up inside a shoe box. Meanwhile, on “Long Snake Moan”, he ‘played’ a toy dinosaur, recording its roar through his guitar pick-up.

“I went from contributing nothing to inserting myself on most of the tracks,” he says. “Almost everything I suggested got in. We had a similar process for Is This Desire?, when I came in with more prepared ideas and more of them were tossed out in the first round. She has the right to do that. Polly is like Tom [Waits]. An auteur in the classic sense. She conceived and executed everything. One time, Tom was talking about another artist and he said, ‘It sounds like she was taking her songs to the hairdresser and the make-up artist.’ He was saying that it was the producer who was giving the songs their style and the artist was relying on somebody else to find the gestalt of the project. It’s not like that with Polly. She knows what she wants.”

You can read much more about PJ Harvey and the making of To Bring You My Love in the November 2020 issue of Uncut, out now!