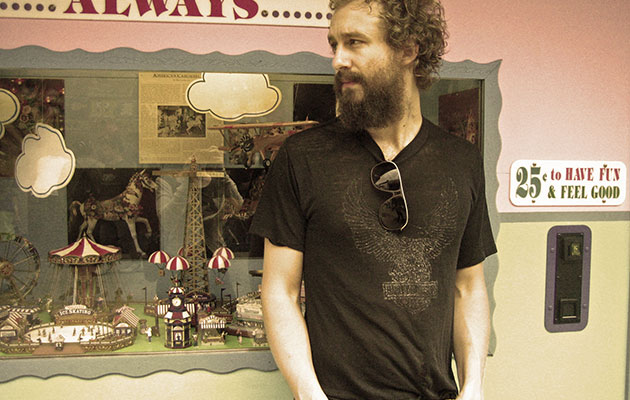 Matthew Houck’s quietly brilliant career fronting PHOSPHORESCENT has taken him from Alabama to Brooklyn and encompassed cosmic outlaw country, Crazy Horse jams, electronic washes and an ambition to match Astral Weeks. Now, after a ruined relationship, a restorative trip to Mexico and a stint in Hendrix’s old studio, he might just have made his masterpiece…

When at the beginning of last year his life in New York started to unravel, Matthew Houck, still vaguely traumatised by nearly two years touring behind Phosphorescent’s breakthrough album, Here’s To Taking It Easy, did what so many before him have done, finding themselves standing in the rubble of love gone wrong. He took flight, fled the sour scene of unbidden heartache.

“It was a Sunday, about three in the morning. I was just a hot mess,” he says. “I’d been thinking for a couple of days that I might need to actually leave town. I was in a relationship that was clearly at its end. That’s never an easy time. Anyway, I felt a need to remove myself from my life, the scene I was in. Take a deep breath, you know, and just go. I went online and there was a flight from New York to Mexico, leaving in three hours. I took it.”

He fetched up in Tulum, 80 miles south of Cancún on the east coast of the Yucatán Peninsula, a small resort popular with hippies, backpackers and the occasional celebrity, famous for its Mayan ruins and the Casa Magna, the former holiday home of Columbian drug baron, Pablo Escobar. This was where Houck started to write the songs that form the core of the new Phosphorescent album, Muchacho.

“I stayed in a cabaña on the beach,” he recalls. “There was no running water and the power went off at 8pm. At night you had to work or whatever by candlelight until the electricity came on again in the morning. There were some hippies there and a lot of people who’d just checked out of their lives, like me. I wasn’t really talking to anyone, to be honest. I was looking for solitude. I needed to be on my own to do the work that needed to be done.

“I’m not normally good at routines,” he goes on. “I’m not what you’d called a disciplined songwriter. I can start a song really easy. I mean, give me a couple of minutes with an instrument and I can probably have a pretty good tune worked up real quick. But I often tend to leave them at that point, unfinished. When I was in Mexico, for the first time I forced myself to write, to sit there and actually finish songs and that’s what I’d do. I’d write that second or third verse, wrap up that chorus.

“The only music I’d written since coming off tour was weird ambient pieces, nothing like the last album at all, and that’s a direction I thought I’d go in on the new record, which was beginning to feel so different I actually thought of maybe putting Phosphorescent on hold and releasing the record under another name. But in Mexico, I started writing on top of those ambient pieces, and the songs started coming. The first one that came as a complete song was ‘Muchacho’s Tune’, and that was when everything clicked for me. Everything came from that one song, the first song. The entire album followed. All these ideas that were just floating around, just out of reach, started actually to become finished songs. All of a sudden, I had nine of them.”

And they were presumably inspired by recent turmoil?

“Yes, I think so,” he says. “The songs are always inspired by the circumstances I find myself in at any given time. It’s like the catalyst for me sitting down and hammering out songs has pretty much always been when there’s some kind of turmoil in my life. It’s maybe a coping mechanism, something I turn to for comfort at times when shit gets weird and shit seems to get weird every few years, you know? That’s when I write.”

So this was an album born from crisis?

“Aren’t they all?” he says, laughing again.