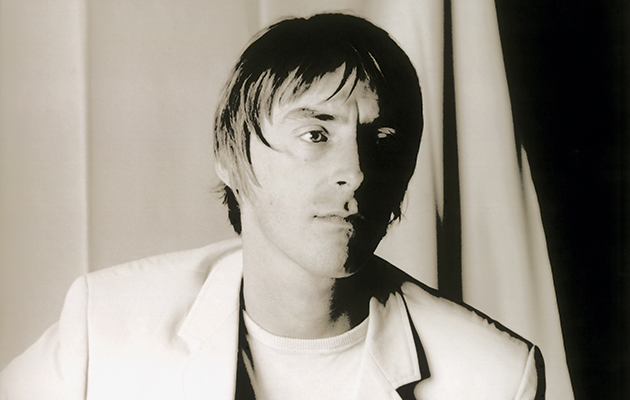 No longer Spokesman For A Generation, Weller is a revitalised solo artist, grappling with more introspective matters than political ones. “I really believe I’m just good at what I do. Playing guitar, singing songs and that’s about it,” he tells IESTYN GEORGE. Has his fire really gone out? Hardly… Originally published in NME’s 04/09/1993 issue, and later reproduced in Uncut’s Paul Weller Ultimate Music Guide.

Paul Weller and The Jam are on the cover of Uncut’s History Of Rock 1979 edition, in stores now or available to buy online.

For Paul Weller, 1989 was a bad year. After 12 years of crafting some of the most memorable moments in British music history, he reached a creative dead-end. The Style Council, for a brief time regarded as the saviours of pop, looked out on their feet.

Five LPs along the line, the record company eventually drew proceedings to an untidy close by refusing to release an album adopting an out-and-out house direction. That, so it seemed, was that. Like Lydon, Strummer, Jones, Shelley and to a lesser extent Costello, yet another ’70s icon – perhaps the finest of them all – had fallen by the wayside before achieving true greatness. No more heroes – that was their catchphrase…

Fast forward to July 1993 and Weller’s appearance on Jools Holland’s BBC2 series, Later…. Looking tanned and sturdy, he rips the place apart from the first chord of “Sunflower” to the dying moments of “Has My Fire Really Gone Out?”. Sinewy, rough-edged riffs compete with Steve White’s pounding drum assault. Weller confidently stomps around the studio floor wearing the broadest of smiles, his face soaked with sweat. For the first time in years, Paul Weller’s enjoying himself, dropping the mask of earnest singer-songwriter and just letting himself go in public.

But is this apparent return to form merely a nostalgic reflection of past glories? Sure, he’s arguably had a broader influence on current music than any other artist – from The Wonder Stuff and Ride through to Carter and Blur – but does he have anything new to offer?

A month later we’re at The Manor, the Oxfordshire studio where Weller recently finished his second solo LP, Wild Wood. As the first single, “Sunflower”, suggests, it’s a blistering return to form. A spacious country house, fringed by greenery and a clear water stream, The Manor is home-from-home in a stately kind of way. We’re greeted on arrival by the generously waisted Kenny Wheeler – minder, gofer and moral support to the Weller clan for over 16 years. Still managed by his father John, Weller has kept this close-knit unit with him throughout his days with The Jam, the Council and, now, his solo career.

On first meeting, you can see why he relies so heavily on this extended family set-up. Much has been said about his shy, awkward manner in the past and the first thing you notice about him is the way his eyes dart uncomfortably around the room, like a cat looking for an escape route from the clutches of an over-zealous child.

Still, he makes conversation, trying you out for size. What do you think of the album? When do you want to do the interview? Where do you want to do the photos? And gradually, with the formalities over, you begin to realise the characteristically fragile Weller persona is not as accurate as it first seems. He’s no after-dinner speaker for sure, but there’s a quiet calm about him, and a warmth of character that overrides his initial shyness.

No longer the spokesman for a generation, political firebrand nor champion of causes, Paul Weller, the bloke, sits cross-legged on the living room floor next to a pile of Stax and Motown rarities, talking comfortably about the past, quite obviously at ease with himself.

But to understand his current state of serenity, it’s important to note the desperate trough he’d sunk into with The Style Council. A rapidly disillusioned Weller had already decided to split the band by the time Confessions Of A Pop Group was released in July ’88.

“I couldn’t say it was a mutual decision,” he explains, “but I wanted to get out.” Things had become stale and he and songwriting partner Mick Talbot were bored by it all. The reaction to Confessions… made him feel that he’d become isolated from the real world. He thought it was the best record he’d ever made – critics and fans thought otherwise. It threw him that he’d become so far removed from his audience.

“After The Style Council, I felt totally unleashed,” he says, looking wistfully into the middle-distance. “I had no record deal, no publishing deal – for the first time since I was 18 I was a free man. But I went through a period when I thought, ‘What do I do now?’ because I’d spent so many years doing the same thing, going down to the studio every day, and when you haven’t got anything to work towards, it can really throw you. I had to just have some time to decide what I wanted to do. It was probably the first time I’d had the opportunity to stand still and take stock of what I was doing in life.”