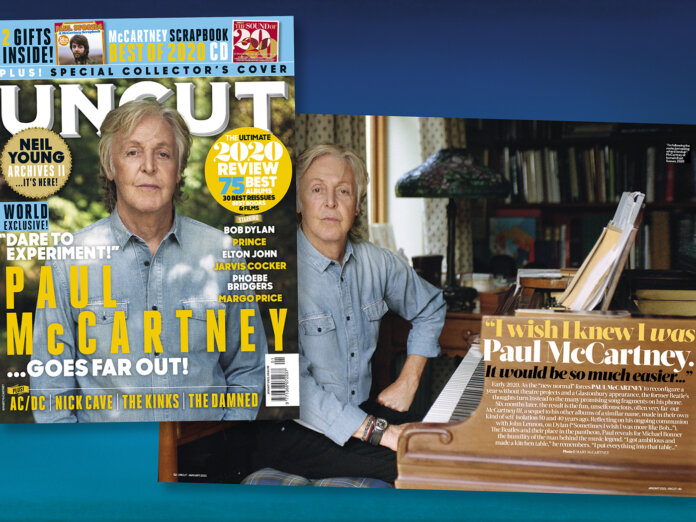 The brand new issue of Uncut – which hits UK shops today and is also available to purchase online by clicking here – features a world exclusive interview with the one and only Paul McCartney. Ostensibly he’s with us to talk about his new solo album McCartney III, largely recorded at home during lockdown this year. But we also get to hear about his carpentry skills, his admiration for Bob Dylan… and his ongoing communion with John Lennon and George Martin. Here’s an extract from the interview:

You said some of the songs on McCartney III had been around for a while. Do you often look in the cupboard?
The problem with iPhones is that you can have an idea – “Doo do doo do come on bam bam” – and you think, ‘That’s good, I’ll finish this later.’ Then you realise you’ve got 2,000 of these ideas on your phone! ‘Oh, God! Am I ever going to get round to them?!’ So lockdown allowed me to get round to a lot of them. But I do have a list of songs that I started but didn’t actually finish or release.

How long is the list?
Too long! It’s songs I’ve written on holiday, songs from before Covid where I was in the studio, right after Egypt Station, but I didn’t need to come up with an album and also songs I liked that got sidelined. I’m working on one at the moment that was going one way, but I didn’t like the lyric. “No, this is not happening, mate.” This would have been the point where John and I would have said, “You know what, let’s have a cup of tea and try and rethink this.”

Do you often mentally consult John when you’re writing?
Yeah, often. We collaborated for so long, I think, ‘OK, what would he think of this? What would be say now?’ We’d both agree that this new song I’m taking about is going nowhere. So instead of sitting around, we’d destroy it and remake it. I started that process yesterday in the studio. I took the vocal off it and decided to write a new vocal. I think it’s heading in a better direction now. Anyway, it keeps me off the streets!

You used some pretty impressive gear on this album, including Bill Black’s double bass that he played on “Heartbreak Hotel”. That was a gift from Linda, wasn’t it?
We had quite a few acquaintances in Nashville. One of the guys who we knew happened to know Bill Black’s family. He was chatting to Linda and said, “That old bass is just sitting in the barn. Nothing’s going to happen with it.” I think Linda thought, ‘God, talk about a birthday present!’ She organised it all and gave it to me. I’ve been playing it ever since. I can’t play it very well because I’m an electric bass guy. But it’s a great sound and as long as the part I’m doing is simple, I can manage it.

You’ve also got an Abbey Road Mellotron! Does that bring back any particular memories?
Oh, yeah! We used to go into Abbey Road every day; it was our workplace. One day, in the middle of the studio, there was this… piece of furniture that none of us had ever seen before. It was a kind of wartime grey colour. It wasn’t glamorous at all. We said, “What’s this?” The engineer started explaining it to us: “It will synthesise strings. You can get flutes and organs and all sorts of stuff.” So we became fascinated with it. We used it on a few things, like the intro to “Strawberry Fields”. There’s a Spanish guitar line on “Buffalo Bill” – that’s actually the Mellotron. These days, if you go a bit crazy on it and don’t allow it to do its full sample, you end up with a wacky piece of music.

“When Winter Comes” dates from 1992. It’s a George Martin production. Nice to have George present, in spirit at least. What springs to mind when you think of him?
He was brilliant to work with. He was like a doctor when you’re ill. They have a way of not getting you angry. “Sure, let me just take your temperature.” George was like that. I’d disagree with one of his ideas, and they were often very good ideas, and instead of having a barney, he’d say, “Maybe we could just try it and if you don’t like it, we’ll lose it.” Then I’d go, “Oh, OK.” He was clever that way. He’d get you to try things. “Please, Please Me”, originally we brought to him as a very slow Orbison-esque ballad. “Last night I said these words… Come on – joojoo – come on – joojoo” – you can imagine Roy Orbison doing it. George said, “It might be good a bit faster.” We go, “No.” He used this skill of persuasion and he got us. “Oh, go on then, we’ll try it.” So we did, “Last night I said…” He goes, “There’s your first No 1.”

You can read much more from Paul McCartney in the January 2021 issue of Uncut, in shops now or available to buy online here.