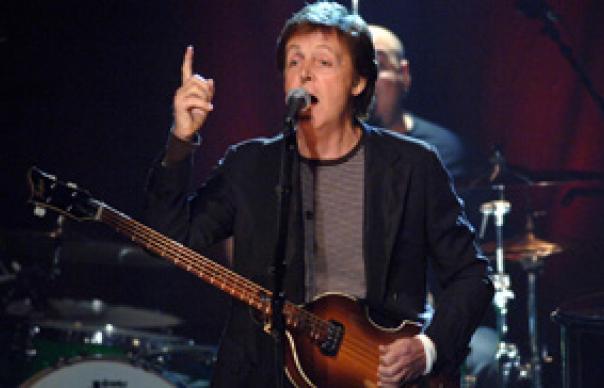 “It’s a long time we did a gig like this,” says McCartney part way through tonight’s not-so secret gig, and you’d imagine even the most devoted Beatles’ scholar would be hard pressed to recall the last time Macca played a venue with the word “Ballroom” in the title – let alone any venue with a capacity of a 1,000.

Certainly, the last time Macca played the UK was when he headlined Glastonbury in 2004. Tonight, then, is clearly something of an event, and though ostensibly part of the promotion for his new album, Memory Almost Full (his first rock record since 2005’s Chaos And Creation In The Backyard), he engages enthusiastically with his bejewelled back catalogue, playing no less than 10 Beatles’ songs. The audience comprises competition winners and fan club members, though the balcony is packed with celebrities, presumably rattling their jewellery by way of appreciation.

Dressed in a long-sleeved grey t-shirt and dark trousers, and flanked by a band who look like their auditioning for a reality TV show to be the next Razorlight, Macca arrives on stage at 8.30 sharp and plays for almost two hours. It’s fantastic, almost surreal, to see him playing such a small venue, performing “Drive My Car”, “The Long And Winding Road”, “Back In The USSR” (complete with aeroplane sound effects) and “Let It Be”. More than, say, Dylan and the Stones, his songs are hardwired into our genetic make-up – children are born able to sing along to “Hey Jude” – and to hear them in a venue of such relative intimacy by the standard of usual Macca gigs connects us directly to some kind of etheric record, the public consciousness.

There’s no point – and, indeed, why should he? – for Macca to try to escape the shadow of The Beatles, and on “That Was Me,” he sings almost incredulously about “sweating cobwebs under contract/In the celllar/On TV/That was me… [It’s] pretty hard to take it in.” Introducing “I’ll Follow The Sun”, from Beatles For Sale, he remembers “writing this in a house… that’s now a National Heritage thing.” After a heart-stopping version of “Blackbird”, he dedicates “Here Today”, from Tug Of Love, to “John, George and Linda.”

Between songs, his banter occasionally become cringe-worthy, whether it be the faux Jamaican patois into which he frequently lapses, a daft explanation of how Camden got its name, or doing bad impressions of Harry Enfield’s Scousers.

The final leg features a blistering cover of Carl Perkins’ “Matchbox”, “Get Back” and “Hey Jude”, the latter becoming both the end of the main set and the start of the encore, only a heartless churl incapable of being swept along with the “Na na na na na na na” chorus. “Let It Be” is followed by “Lady Madonna,” and he closes with “I Saw Her Standing There”, indelibly and magnificently locating us back to 1963, at the birth of everything.