On their fine "Light Up Gold" album from the end of last year, Parquet Courts often come across like a kind of self-mythologising, self-effacing Brooklynish hipster band, allbeit one who are, of course, a) disdainful of the term 'hipster'; b) focused on a rather old-fashioned hipster sound that, until they became hip, was probably too hip, or not hip enough, for hipsters; c) snarky about self-mythologising, self-effacing Brooklynish hipsters; d) probably reflexively quite snarky about themselves. 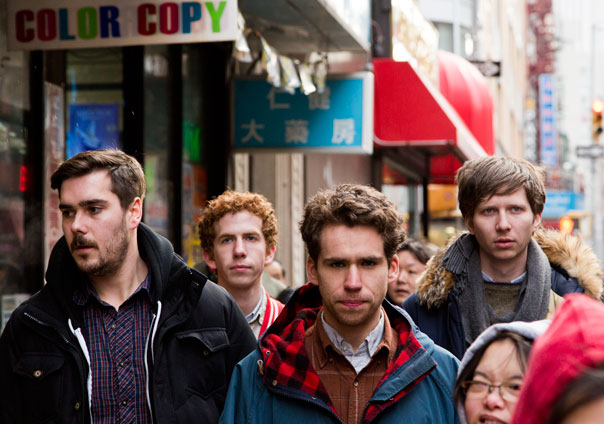 On their fine “Light Up Gold” album from the end of last year, Parquet Courts often come across like a kind of self-mythologising, self-effacing Brooklynish hipster band, allbeit one who are, of course, a) disdainful of the term ‘hipster’; b) focused on a rather old-fashioned hipster sound that, until they became hip, was probably too hip, or not hip enough, for hipsters; c) snarky about self-mythologising, self-effacing Brooklynish hipsters; d) probably reflexively quite snarky about themselves.

“You should see the wall of ambivalence I’m building,” they claim in “Master Of My Craft”. “Adam Savage and Austin Brown make the kind of music that would be dumb stoner fun if only it weren’t so smart,” notes my colleague, Joe. Parquet Courts, it seems safe to conclude, are not only a good band, they’re one who are too cool to be cool.

Oddly, though, not much of this is apparent – or, at least, audible – when they make their London debut on Tuesday night. “Light Up Gold” contains a bunch of songs that could feasibly satisfy those Strokes fans who’ve finally given up on the band in the wake of “Comedown Machine”. Parquet Courts do not, however, have much in the way of the old Strokes’ poised nonchalance; they will not, one suspects, blaze a trail into the fashion world elite.

Instead, Savage, Brown and their keen rhythm section look and sound pleasingly nerdy, thrown together, and just about ready for a slot above The Grifters in the NME tent at Reading circa 1993. When they begin with a tune that would have found a comfortable home about three-quarters of the way through “Wowee Zowee”, the game is already up: writing about Parquet Courts without mentioning Pavement might be a noble endeavour, but to be honest it’s a bit of a mug’s game.

This is not, importantly, a criticism. I love Pavement, and Parquet Courts channel their collapsible spirit better than any band I’ve seen or heard in a long time. They have an apparently unquenchable love and respect for “Debris Slide”, and two singing lead guitarists, though as another Uncut colleague notes, it’s a bit like watching Pavement fronted by two Spiral Stairs (cf “Careers In Combat”, especially). As should ideally be the way with all bands influenced by Pavement, Parquet Courts don’t appear self-conscious or hamstrung by their antecedents; instead, they just get on with playing their terrific songs at a fair clip, studded with cranky semi-solos and breakneck twists, and being a lot of fun.

To be fair, there’s plenty more going on in these songs than mere homage to one band. Looking for other comparisons, their wiry ramalams fall into a tradition that began with The Velvet Underground (with “Loaded”, more specifically), rattled on through early ’80s Fall, and manifested itself most recently in the brilliant Australian garage band, Eddy Current Suppression Ring.

Bands like Parquet Courts are often portrayed as diffident slackers – or certainly were 20 years ago, when slackers were a thing – but it probably takes some work and practice to sound like this. “Light Up Gold” sounds like Parquet Courts will be a very enjoyable live band, and they are. Some songs are sped up to a hectic velocity, like the title track, which suggests that Savage and Brown might see themselves as a punk band. Others are strung out and jammed, after a fashion, though it’s a form of jamming that seems to come from capriciousness rather than virtuosity.

Best of all, and loosely in the latter category, are two crotchety indie-rock masterpieces, “Master Of My Craft” and “Stoned And Starving”. “Master Of My Craft”’s rampant drollness is somewhat lost here – the “Fuhgettaboutit” line used as punctuation comes across as gawky singalong more than self-satirising archness – but the heads-down glee with which it’s played, and the false endings (at least three) which momentarily derail its rush, are mighty exciting.

Ditto “Stoned And Starving”, the predictable set closer, which rides an overdriven Dingerbeat and devolves into ranting, skronk and a belligerent reprise of “Light Up Gold”. As a nostalgia band for people who at least try not to be sentimental about their youths, Parquet Courts work brilliantly. But I think there’s enough craft and sleight-of-hand here to make them more interesting than that. Bring on the major leagues…