Oasis on Be Here Now: “This record ain’t going to surprise many people”

Noel and Liam Gallagher discuss fame, drugs and their third album, in this 1997 NME feature 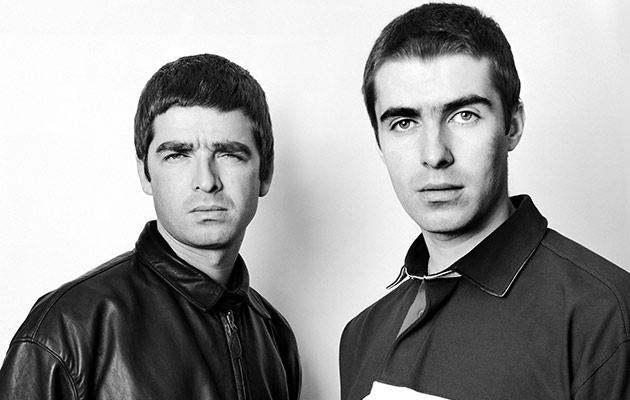 Liam Gallagher loves his wife, Tina Turner and Neighbours, hates sleep and Andy Bell’s band, and is anxious to show he’s not frightened of aliens. Noel Gallagher, meanwhile, has a lot to say about fame, drugs, the government, the bonding rituals of Paul Weller, the future of Oasis – and even their new album, Be Here Now. TED KESSLER switches on the tape recorder, opens the Hooch bottles and listens, amazed…

Originally published in the 12/7/97 issue of NME, and reprinted in Uncut’s Oasis Ultimate Music Guide – buy a copy now while stocks last…

They need to be themselves, they can’t be no-one else. Well, maybe. Right now, bustling through the photo studio’s huge steel doors in a flurry of green and blue, Noel and Liam Gallagher are each other. Same hair, same scowl, same swagger, same security guards: brothers. In matching Kangol parkas.

Noel rolls his eyes. “Er, right. We should make sure we get some money off Kangol for this.”

“Too right! Can’t wear anything these days.”

“Yeah,” agrees Noel. “Can’t wear anything these days without someone trying to give us money for it. Bloody terrible, that is. Do you want a sarnie?”

“No, but I’m mad for a beer.” Liam swivels around looking for his security guard. “Get
us a couple of beers, mate. I’m going to hit fucking Paris tonight! I’ve been in for three days and nights doing fuck all, just watching Neighbours twice a day. I’m getting a thing for Helen fucking Daniels and it’s not healthy! I am gasping for a proper night out. It’s going to be top!”

Noel momentarily brightens. It’s not been a great morning, but the future smells sweeter.

“Yeah,” he says, nudging his brother, “just you and me in Paris! We’re going to have a right party! Patsy and Meg will be panicking, ringing the hotel rooms, wondering where we are and we won’t be there. We’ll be out!”

But first, perhaps, a little more time in. We only have a few hours before the train pulls out of Waterloo, but these will be hours well spent, on the last day in June in a North London studio, staring out a photographer with glacial cool, before taking turns to impart wild nonsense and steely sense into a microphone. It will be time spent reflecting upon what it means and how it feels to be the two figureheads in the biggest and best rock’n’roll band of our generation as they prepare to unleash another epic record.

It will be time, too, for Oasis to step back into the ring and casually take a huge bite out of their opponents’ ears.

“I see Hurricane #1 went in at No 35,” notes Noel, chomping into his BLT and nodding at his press officer. This is not a congratulation, but an opening jab at labelmates who recently and foolishly lashed out at Liam in NME. “That’s 35 places too high in my book.”

“Hurricane #1?” queries Liam, sauntering over. “He copies my haircut and then slags me off! What’s that about? But I ain’t into this bickering between bands now. I’m a married man. I’ll just blank the cunt.”

“Who’ll I batter? Hurricane #1? Never heard of them. Isn’t that some indie band with the guy from Erasure in them?”