Like everything else, Noel Gallagher had an opinion about debut albums. “Definitely Maybe was the young, eager, wanting to get out there and fucking blow the world away album,” he told Uncut in 2000. As Gallagher claimed on many occasions, he’d been strategising a debut album, in whatever form, since his teenage years. With such apparent forethought, it’s no wonder that when Definitely Maybe appeared in August, 1994 it redrew the parameters of indie rock, filling a void left by The Stone Roses and gave Alan McGee’s Creation Records a world-class act. 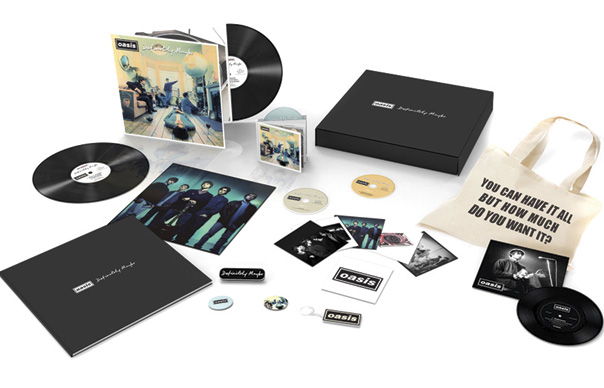 Like everything else, Noel Gallagher had an opinion about debut albums. “Definitely Maybe was the young, eager, wanting to get out there and fucking blow the world away album,” he told Uncut in 2000. As Gallagher claimed on many occasions, he’d been strategising a debut album, in whatever form, since his teenage years. With such apparent forethought, it’s no wonder that when Definitely Maybe appeared in August, 1994 it redrew the parameters of indie rock, filling a void left by The Stone Roses and gave Alan McGee’s Creation Records a world-class act.

But, as this triple CD 20th anniversary set illustrates, there is more to this great album than that. The band’s evolution forms the rump of this reissue, which presents the finished (remastered) album alongside two additional CDs of demos, B-sides mixes and live versions, running bafflingly in a non-sequential order from the band’s 1993 Live Demonstration demo up to the isolated string track for “Whatever”. In March this year, Liam Gallagher took to social media to advise fans to boycott this reissue, Tweeting “HOW CAN YOU REMASTER SOMETHING THATS ALREADY BEEN MASTERED.DONT BUY INTO IT.LET IT BE LG X”. But it’s possible that Liam has other problems with this reissue. The earliest demos here demonstrate that Liam’s persona and delivery as of 1993 is very much a work in progress. There’s none of the elongated vowel business on the (undated) “Cigarettes & Alcohol” demo: no “sunshyyiiiiiine” or “white liiiiiine” to give the song that bit of heft. Liam’s cocksure attack on “Rock’n’Roll Star” – a critical component in setting out the album’s stall – is instead rather passive on the early version here. At this point, it’s fair to say, Liam has yet to make contact with his inner Liam.

The process by which Oasis morph from indie foot soldiers to the swaggering generals sparheading the Britpop charge occured under the guidance of a number of different producers – Dave Batchelor, Mark Coyle and Owen Morris. You might wonder whether this extra view behind the curtain undermines the magic of the finished album. It doesn’t. For one, it provides an amusing corrective to the creation myth peddled by the likes of Alan McGee, that the band emerged fully formed as the saviours of rock’n’roll onto the stage of King Tut’s Wah Wat Hut, where he first saw them on May 31, 1993.

Beyond that, it’s often a fascinating piece of archaeology, tracing the arc of Oasis’ development, as demonstrated by the three versions of “Columbia” here. The first in its spring, 1993 incarnation recorded at the Real People’s Porter Street studios in Liverpool (baggy groove, reedy-sounding guitars), then in Mark Coyle’s March, 1994 mix at London’s Eden Studios (bigger, tighter, yes; but Liam still not quite “Liam” enough), and finally, in the album version, all the ducks in a row, the guitars at full tilt and Liam in his swaggering pomp.

However much this peels back the layers, Definitely Maybe remains utterly unshakeable, fulfilling Noel’s desire to “fucking blow the world away”. Against the introspection of shoegazing, the defiance of Definitely Maybe and the blithe arrogance of the young Gallaghers ushered in the Nineties in all its cokey, New Lad bagadaccio. Listening back to “Rock’n’roll Star”, “Shakermaker”, “Supersonic” and especially “Columbia”, it’s easy to see how the mix of punk spirit, Glam stomp and the indie penetrated so deeply into the consciousness. Musically, it offered a kind of populist ‘best of British’ sound, delivered with closing time, arms-round-your-mates choruses. “Live Forever” and “Slide Away” represent key components of Oasis’ arsenal. Pregnant with emotional resonance (“Maybe you’re the same as me / We see things they’ll never see” … “Let me be the one that shines with you”), but essentially meaningless, Noel later refined this kind of songwriting with “Wonderwall” and “Don’t Look Back In Anger” on Oasis’ second album, What’s The Story (Morning Glory)?. Elsewhere, the oft-repeated claim that Noel could pen classics in his sleep is mitigated by “Cloudburst” (a “Live Forever” B-side) and the previously unreleased “Strange Thing” (from March 1993), which both sound like by-numbers late 80s British indie. Still, Noel’s solo acoustic B-sides “Sad Song” and “Half The World Away” are still pleasing moments of tranquillity in between Liam’s mad fer it jollies.

If Definitely Maybe still sounds pretty much as Noel envisaged, that’s certainly to do with the quality of the songs, the delivery and the timing. But Definitely Maybe is also untainted by the later decline and fall: the multi-tracking, the cocaine bloat and the imitators that followed in its wake.