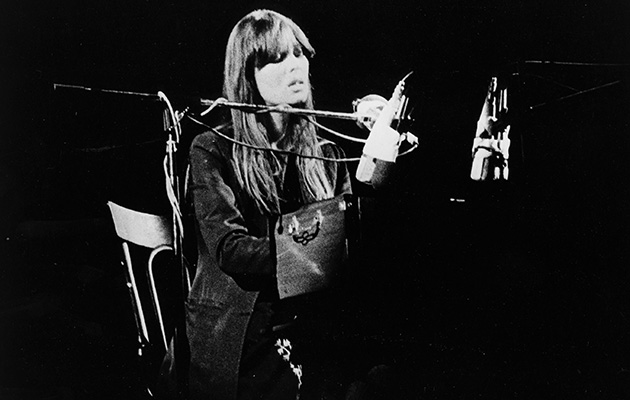 The album when it was finished comprised eight tracks and lasted barely 30 minutes, which was as much apparently as Frazier Mohawk, mixing and sequencing it, could stand without starting to feel suicidal.

“It is unrelenting,” Cale agrees. “In places, it’s ferocious,” he goes on, perhaps understating things. The Marble Index gives voice to a psychic landscape of immense loneliness, a wintry place, lit occasionally by a haunting Alpenglow, but otherwise darker than anywhere rock music had ever been or in future would much care to venture. Forty-five years on, it continues to startle and overwhelm, its occult power undiminished. Nico’s voice is at the centre of things, surrounded by music that is all gale and gust, unholy buffetings, clangourous, anxious accumulations of menace and dread, great babblings, melodic chaos looking for tuneful order. There are moments when she might be singing into a headwind from the prow of a ship, battering its way around a southern cape, her voice holding fast in the oceanic pitch and yaw of Cale’s tumultuous arrangements.

The Marble Index speaks of something more than mere melancholy, evokes a sadness deep in the bones of things, a burrowing hurt trapped in tangled roots, the aching gasp of someone looking at a past that has been obliterated, along with everyone you might expect to find there, every yesterday a ruin, consumed by fire or ice, nothing left in the world that doesn’t call out for pity.

Such is its daunting atmosphere, The Marble Index has long had a reputation for being almost unlistenable, suffocated by gloom, wracked by despondency, as if it consisted of nothing more than the wailing of a Trojan widow and the amplified rattle of butcher’s hooks.

“I’d be disappointed if anyone who listened to The Marble Index properly only heard the dismay,” says Cale. “For me, it has a thrill about it. There is something going on that’s inexplicable. You never know what’s coming next. ‘Evening Of Light’ is thrilling, majestic in a way. It has the grandiosity of Carl Orff. The Marble Index makes more sense in terms of advancing the modern European classical tradition than it does as folk or rock music. I sent it to Aaron Copland,” he says, referring to the great American composer who had helped get Cale a scholarship at the Berkshire Music Center in Tanglewood, Massachusetts, where he studied Modern Composition. “I hadn’t spoken to him in years but I was interested to find out what he thought about it in those terms. But his only comments were on Nico’s voice, which he thought was ‘gravelly’. I don’t think he understood how it was done and how it was all improvised. Fortunately, when I played it to Jac Holzman, he got it immediately.”

“My reaction to it when I first heard it was silence,” says Holzman. “I just listened. It was unlike anything I’d heard. It was daring. It was daunting and it was haunting. There was no question of not releasing it. I knew it was going to be tough. It reminded me of a record I had made in my folk days, O Lovely Appearance Of Death, with a woman named Hally Wood, an entire album of songs about death, sung a cappella. Now that’s a strange album for anyone to put out. I don’t think we sold more than 1,000 copies of it, but that’s not the point. The point is that it was good. Whether people understood it or not didn’t matter. The same went for The Marble Index.”

“I was impressed,” says Cale of Holzman’s reaction.

“I dropped it off and he called me and said, ‘Come by and we’ll talk about this.’ He really liked it. I was shocked. He obviously had a really catholic palette. His attitude was, ‘Don’t worry about the money. Concentrate on the art and the money will follow.’ That’s not a common attitude in any business, let alone the music business.”

“Jac had such great taste, I was sure he’d want to put it out even if it only sold four copies,” says Fields. “It was clearly a brilliant album and no-one had heard anything like it. That would have meant a lot to Jac. And there wasn’t a lot of money spent on the album so nothing was at stake. Elektra had The Doorsputting plenty of money in the bank. And there was no giant campaign behind it. It wasn’t like they were launching a new Rihanna album.”

“What I especially liked was that there was nothing else like it out there,” says Holzman. “Yes, it’s gloomy, depressing, not an easy listen. But so what? You were warned from the beginning of the album that you were going to be thrown in at the deep end and you would have to give yourself up to it. The people who do that understand an important truth about who this artist was and that she was trying to put into this world something that had not previously been there. It’s an amazing record.”

Nico never made another album for Holzman, although she would record three more with Cale – Desertshore, The End and Camera Obscura – before she died, falling from her bicycle after a heart attack on Ibiza in 1988 aged 49.

Holzman had become increasingly concerned by her heroin use, which was on its way to becoming the full-blown addiction that would disastrously consume her.

“Keeping her on the label became unlikely,” he says. “What I was disappointed in was her inability to keep promises. She was irresponsible and difficult. It was just the way she was. Additionally, there were other influences in her life, shall we say, that made her at best unreliable.”

Before she was officially dropped from Elektra, however, she vanished. There was some dreadful incident at the Chelsea Hotel. Nico, drunk, stabbed a woman in the eye with a broken wine glass. When Cale first told me about this many years ago, I seem to remember in his account that the Black Panthers were somehow involved, dire retribution threatened for Nico’s violence.

“My standard response these days to questions about that,” says Fields, a witness, “is that the Warhol crowd spirited her away, put her on a plane to Cairo at five in the morning. No-one was killed or maimed for life, but let’s just say she was wise to get out of New York.”

“It was typical,” says Cale of her flight into European exile. “She’d get somewhere she always thought she wanted to be and the next thing you knew she’d be somewhere else. That,” he says, “was Nico all over.”