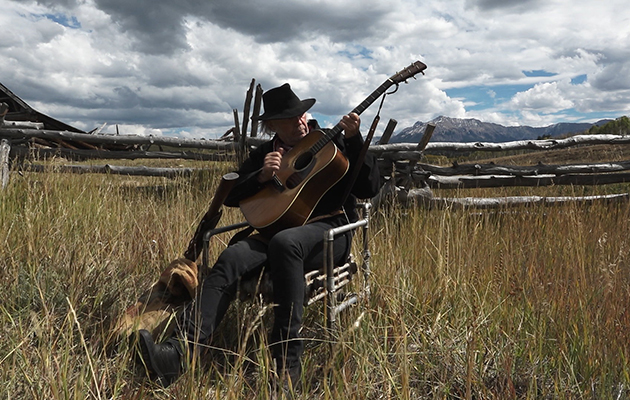 Neil Young is evidently a man on several different missions right now. As a working musician, he is in the throes of a fruitful relationship with Lukas Nelson and the Promise Of The Real. As an archivist, he is teasing out long-lost gems or potent live cuts from his capacious back catalogue. Meanwhile, his environmental activism, a recurring motif since the ’70s, has become more pronounced of late. A sci-fi novel, we learn, is also in the pipeline. Young’s latest project, meanwhile, is Paradox – a Netflix film directed by Daryl Hannah and also a soundtrack album – which goes some way towards uniting all these divergent strands of Young’s career. An eco-sci-fi-western, no less, it casts the musician and his young cohorts as cowboys prospecting for ‘old’ technology – a computer keyboard, an alarm clock, a mobile phone – which they trade every full moon with women in exchange for fresh fruit and vegetables. There are instances of levitation, bad cooking and a vintage steam train. Along the way, Willie Nelson cameos as ‘Red’, an outlaw who holds up the local Seed Bank with Young’s Man In The Black Hat. Naturally, there is also music. The film’s centrepiece is a 10-minute instrumental jam taken from “Cowgirl In The Sand”, filmed at Desert Trip, which helpfully reminds us that however divisive Young’s recent output is (Paradox included), the one thing all his fans can at the very least agree on is the awesome power of his live performances.

Paradox should come as no surprise to veteran Neil watchers. For more than four decades, Young has pursued an idiosyncratic sideline as a filmmaker, using the nom de cinema, Bernard Shakey. His directorial debut, 1974’s Journey Through The Past, was a combination of documentary and art-house experiment, and his subsequent productions have been similarly unorthodox affairs. 1982’s Human Highway, for instance, was a surreal, apocalyptic satire co-starring Devo, Russ Tamblyn and Dean Stockwell. With its semi-improvised vibe and wild, rambling plotline, Paradox definitely shares that Shakey Pictures spirit. Young’s manager, Elliot Roberts, is on hand as a grizzled old cowpoke, offering whacked-out wisdom: “Always take a look at the food you’re about to eat. It’s important to know what it is, but it’s critical to know what it was.” You’d imagine, were either man still alive, that this is the kind of role that would have perfectly suited someone like Hopper or Harry Dean Stanton.

Elsewhere, Young and his band essentially play exaggerated versions of their stage personas. Lukas Nelson is “Jail Time”, Micah Nelson is “The Particle Kid”, a kind of steampunk idiot savant. There is talk of “multi-dimensional turtles” (perhaps Neil and Daryl are Terry Pratchett fans?) and some Blazing Saddles-style philosophising: “Love is like a fart. If you’ve got to force it, it’s probably shit.” There is banter – “Anarchy rules!”, “That’s an oxymoron!”, “What did you call me?” while Young sits in a field for the most part, plucking loose melodies from an acoustic guitar. “The man in the black hat? They all steer clear of him,” says one of the gang. “I heard he can be kind of shaky. Whatever you do don’t let him get that stare fixed on you. He’s a contrary. Trouble comes in? Best not go and sit down beside it.”

Paradox is at best good-natured hijinks; a home movie with some dressing up involved. Shooting on a mix of 16mm and digital, Hannah interspaces the action with nature footage – elk, wolves, deer. She occasionally applies filters, or speeds the film up, contributing to the overall dreamy fantasy. In one sequence, where Young and Promise Of The Real perform “Peace Trail” in a revival meeting tent in a field, audience members tether themselves to the ground before being raised heavenward by the music. It is admittedly a fairly clunky metaphor for music as rapture – but feels decidedly tame next to, say, some of the more outré elements of Human Highway (spaceships, Armageddon, Dennis Hopper as a short order cook, and so on). “Peace Trail” aside, there are few complete performances in the film. “Show Me”, from the Peace Trail album, plays over the start. (Incidentally, Peace Trail was one of Young’s most enjoyable records of recent years; a lot of that, I think was down to the straightforward arrangements and uncluttered, intuitive playing from Paul Bushnell and Jim Keltner.) Later, we see Young at his pump organ playing “Pocahontas” (also filmed at Desert Trip), while the film is closed out by the ukulele version of “Tumbleweed” from the Storytone album.

The film is interspersed with Young’s solo score – at times percussive and violent, at others bleakly poetic – that compares to his sublime soundtrack for Jim Jarmusch’s Dead Man. The Paradox OST identifies them as “Paradox Passage” 1 through to 6. But these pieces are interrupted by other music – some old, some new. Alongside “Peace Trail”, “Pocahontas” and “Cowgirl Jam”, there’s a handful of good instrumentals – including “Running To The Silver Eagle”, driven by some ferocious interplay between Old Black and a harmonica, and “Hey”, which sounds like a vague approximation of “Love And Only Love”. Some, like “Offerings”, feel little more substantial than light sketches. You’ll also find a cover of Willie Nelson’s “Angel Flying Too Close To The Ground” and loose, acoustic versions of Jimmy Reed’s “Baby What You Want Me To Do?” and Lead Belly’s “How Long?” (sung by one of the Nelson brothers) that morphs into The Turtles’ “Happy Together” before the band collapse into laughter. In many respects, the ramshackle, campfire vibe of the soundtrack mirrors Hannah’s film itself – but, critically, it is neither a fully immersive experience like the Dead Man soundtrack or a third album with POTR. It’s perhaps best not to view Paradox (either film or soundtrack) as a major work from a significant artist, but yet another of Young’s shaggy digressions.

Roll on the Roxy set…