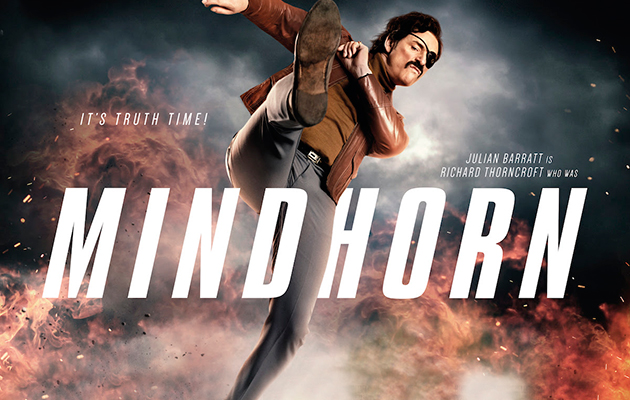 For a comedian, Julian Barratt never seemed especially comfortable being funny. As zookeeper Howard Moon in The Mighty Boosh, his character was vain and selfish; but never especially comical. Playing journalist Dan Ashcroft in Nathan Barley, he was the voice of reason in amidst the ridiculous hipster setting he was there to document. Perhaps that’s why Barratt’s career has never accelerated along similar lines to his peers – he doesn’t seem a natural fit for panel shows or prime time sitcoms.

Mindhorn, which Barratt co-wrote and stars in, at least shares some similarities with his earlier work. He plays actor Richard Thorncroft who, during his Eighties’ pomp, enjoyed success as Bruce Mindhorn – a TV detective based on the Isle of Man, whose left eye had been replaced by a bionic implant, allowing him to “see the truth”. In the present day, Thorncroft is unemployed, delusional and overweight; unable to move on from his former glories. In that sense, like Vincent Moon or Dan Ashcroft, Thorncroft is locked in his own world. A shot at redemption comes when a killer, loose on the Isle of Man, demands to negotiate with Mindhorn.

As a character, Mindhorn is a familiar comic creation in the tradition of Alan Partridge or Stephen Toast – pompous, overbearing, lacking self-awareness – the plot, too, has echoes of the Partridge Alpha Papa movie. But the film’s strength lies in less obvious laughs. Returning to the Isle of Man, Thorncroft meets his former co-star and ex Patricia DeVille (Essie Davies), chirpy stunt man Clive (Simon Farnaby; the film’s co-writer) and another former co-star (Steve Coogan) who has launched a successful business empire on the back of his Mindhorn spin-off. Here, it is possible to watch Thorncroft gradually unravel during each humiliating encounter. The film sags, though, towards the end – as the need for a ‘serious’ conclusion to the narrative overwhelms the silliness of Barratt and Farnaby’s confection.