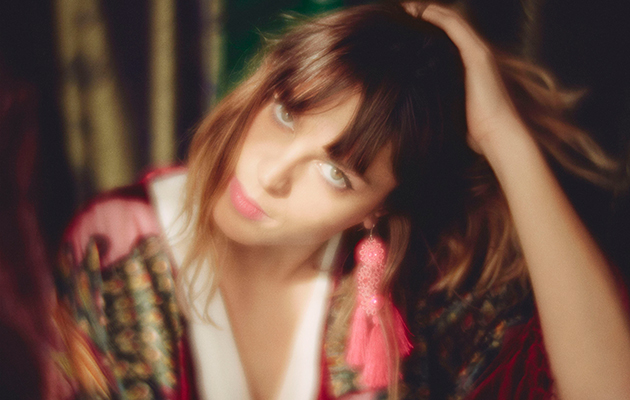 For as long as people have told stories, there have been tales of imaginary journeys: from the Odyssey in antiquity, and Samuel Butler’s 1872 depiction of Erewhon, to the myriad Invisible Cities described by Italo Calvino.

But how about an imaginary journey sculpted in sound? Melody Prochet’s second album as Melody’s Echo Chamber is ever-changing, dynamic and brave enough to perhaps classify as such. From its title right down to the atlas of global influences mixed into its sonic broth, it’s also one of the strangest and most evocative albums of recent years.

Prochet embarked on Bon Voyage in the hope of healing herself, “entering my heart’s wound to explore and maybe find what was broken and how to heal it from the inside,” as she tells Uncut. “Creating this record felt like being the mad captain of a vessel.” Her self-titled dreampop debut – produced by her then partner, Tame Impala’s Kevin Parker, and released in 2012 – was strong, if slightly modest in its ambitions. It was when she embarked on a follow-up with Parker that the couple split, and Prochet was unable, emotionally, to complete the record. All material was scrapped, and the songwriter began to hone her drumming skills at a Parisian music school.

After meeting the group Dungen, though, Prochet figured that Scandinavia might be the nourishing environment she needed to create her second album, so she moved to Sweden for 18 months to work with Dungen guitarist Reine Fiske and Fredrik Swahn, both also in indie rockers The Amazing. The trio swapped instruments and influences during rambling sessions in Solna, near Stockholm, with the confines of Prochet’s debut swapped for a world of inspiration: there are threads from early-’70s Paris, Istanbul, São Paulo and Birmingham, from ’90s Atlanta and New York, and from the deserts and forests of Mali and Sweden today.

One prominent influence, the chanson funk of Serge Gainsbourg’s Histoire De Melody Nelson, is mauled into brave new shapes by Prochet: the lush 12-string and violins that open the first two minutes of “Cross My Heart” are suddenly decimated by an extended breakdown that incorporates Logic samples, scratching and old-school beats, before the track detours into a flute-led lounge haze reminiscent of Air’s Moon Safari. On first listen, it’s dizzying and disorientating, but after some immersion it begins to seem remiss of most of history’s other songs not to include an unexpected hip-hop section.

The bilingual “Quand Les Larmes D’un Ange Font Danser La Neige” (‘When The Tears Of An Angel Make The Snow Dance’) demonstrates the emotional tension at the heart of Bon Voyage, between beauty and pain; halfway through its seven minutes of bleary, lush psych, the music dissolves and the song’s bucolic atmosphere is disrupted by a cut-up poem from Pond’s Nicholas Allbrook: “The memory of making love… shit all over myself when I die… be declared braindead or heart-dead in the Vatican…” It kills the mood the musicians have built, but that’s the point, as are the disturbing screams that appear without warning on most of these tracks.

“Desert Horse” is the most extreme of Bon Voyage’s chapters; beginning as Arabic funk, it appears to quote Black Sabbath’s “A National Acrobat” with a Tuareg twist, before descending into a hushed reverie dominated by malfunctioning Auto-Tune and extended silences. One ambient section is interrupted by a few seconds of piercing shouts and screams, before the whole song launches into a climax of Atlanta trap beats.

At this point in the album, Prochet is in a painful place. “So much blood on my hands/And not much, much to destroy/I know I am better alone,” she repeats, while on the motorik of “Breathe In, Breathe Out” she admits, “I can’t eat, I can’t grow/I can’t heal my soul.” As the record progresses, she appears to reach some point of acceptance, and recovery ensues. “I found somewhere to hide…
a safe place to cry,” she repeats on “Quand Les Larmes…”.

The finest track here, and the one that finds Prochet most at peace, is the penultimate “Visions Of Someone Special, On A Wall Of Reflections”, which begins with a nod to Gainsbourg’s “Ford Mustang” and then moves through calico synths and Turkish funk-rock, complete with saz and zither. The song, like many on Bon Voyage, progresses organically, the frequent changes tied together by Prochet’s keening voice; the result is like a Greek patchwork rug, tiny snippets of fabric stitched together to create a bold, psychedelic whole.

The closing “Shirim” is the most ecstatic thing here, its lysergic disco built over what sounds like an ancient North African folk sample, the kind captured by Paul Bowles, but chopped and looped into minute sections. It’s an accessible end to a strange, rich and global journey in sound – lasting just 37 minutes, Bon Voyage begs to be put on again, each listen revealing more of the myriad ideas that make up its weird majesty.

If Prochet thought her recovery was done after making this album, though, she was mistaken: just after completing it in 2017, she suffered a brain aneurysm and broken vertebrae. Let’s hope the healing powers discovered while making this unique record also speed her next upturn.

Q&A: Melody Prochet’s search for a place of grace

What impact did Sweden have on the album?
I had been on a sort of pilgrimage for a few years, trying to find a place of grace and gentleness to release my creativity, and simply breathe. When I met and heard Dungen’s music, I guessed Sweden might have nourished their music from the root. I felt this aura of kindness and purity of the heart; I sensed roughness and cold, too. I was attracted by the northern seasons’ contrast and their modern civilisation living at peace and needing nature.

How did the breakdown in “Cross My Heart” develop?
I remember starting with this Brazilian flow inspired by Marcos Valle, then it turned into listening to Todd Rundgren, Todd Terje, Stereolab, and watching Disney Fantasia clips. I created this very long space for Reine and Swahn to have fun and explore – they jammed for a couple of hours. Then I sculpted my way into it and had a lot of fun with samples. I’m very proud of this song.

A few years ago you said you were keen to work on string arrangements – I assume they are yours on Bon Voyage?
I went back to Stockholm to mix, and Reine and I ended up picking Swahn’s mother’s three-string old folk violin, and recording our own arrangements spontaneously without writing anything down. Only intuition and emotion. It was a very old wish of mine to play violin to my music and be satisfied with it.

We hope your recovery is going well – have you thought about beginning to make music again?
Thank you. Right now I’m focusing on keeping things as simple as they can be in my life, making music is not so simple for me. I think I’ll travel life differently for a while until…
INTERVIEW: TOM PINNOCK