I was reading this interesting Wilco piece a few days ago, which talks about how Jeff Tweedy has parlayed cult success into what appears to be a viable business model. It made me think of the strategies used by Mark Kozelek these past few years: how he keeps a steady stream of music, predominantly live albums, coming through his Caldo Verde label to satisfy his obsessive fans (and I suspect Kozelek fans tend to be by nature obsessive; I know I am). 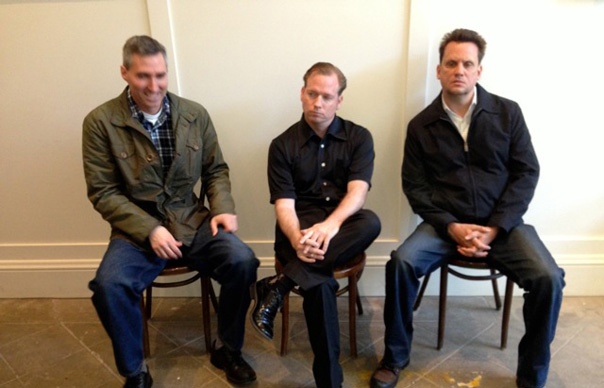 I was reading this interesting Wilco piece a few days ago, which talks about how Jeff Tweedy has parlayed cult success into what appears to be a viable business model. It made me think of the strategies used by Mark Kozelek these past few years: how he keeps a steady stream of music, predominantly live albums, coming through his Caldo Verde label to satisfy his obsessive fans (and I suspect Kozelek fans tend to be by nature obsessive; I know I am).

This year, Kozelek’s productivity has accelerated. Besides the discreet glut of live sets (actually only a couple thus far, now I’ve checked), there’s been a solo covers album (“Like Rats”), the Jimmy Lavalle collaboration (“Perils From The Sea”) and, now, a return hookup with his old friends Desertshore (“Mark Kozelek & Desertshore”). Kozelek, one might imagine, would see kindred spirits in Wilco, not least because they share a mutual friend or two (not least Alan Sparhawk, who’s back here singing on “You Are Not Of My Blood”; Kozelek was more or less an original member of Retribution Gospel Choir).

That, though, would be underestimating the perverse care with which Kozelek strives to present himself as a curmudgeon. “Mark Kozelek & Desertshore” once again proves that great artists – and I’d strenuously argue that Kozelek has shown himself, over the past two decades, to be one – do not diminish their potency through thematic repetition. It features a lot of songs that once again confront family memories, girls, the consolations of San Francisco, the iniquities of touring, the allure of boxing, the act of creation, dead cats, dead friends and so forth.

The songs don’t feel like they were conjured up as a batch for this specific project, even though guitarist and Red House Painters vet Phil Carney, and pianist Chris Connolly are credited as having written all the music. Instead, they roll on effortlessly from the diaristic studies of “Among The Leaves” (which I wrote about here) and “Perils From The Sea”. The settings may change – predominantly Spanish classical guitar for “Among The Leaves”, muted electronica on “Perils…”, downbeat chamber rock this time out – but Kozelek’s approach, and especially his sputtering new sprechgesang style, a kind of sadcore (ha) rapping (cf “Gustavo” on “Perils…”), is unerringly consistent.

If there’s a lyrical shift, it’s a slow move away from the drolleries of “Among The Leaves”, and a return to more direct poignancies. “Livingstone Bramble”, though, is a striking exception, and the reason why Kozelek’s attitudes towards Wilco have been pushed to the fore. It begins with the singer unable to sleep, thinking once again about boxing (Bramble, it transpires, was a fighter), before turning into one of his songs about the compulsion to make music, with the focus on the technicalities of guitar playing. Kozelek, we learn, can play like Robert Fripp and Johnny Marr, like Malcolm Young and Neil Young. He rates Jimmy Page, Jeff Beck, Steve Vai and Kirk Hammett. He is less impressed, though, with Jay Farrar, Derek Trucks and Eric Clapton, and reserves special contempt for, hilariously, Nels Cline. Twice, he pulls out the punchline, “I hate Nels Cline,” and follows it with a preposterously squiggly parody of a Cline solo.

It’s a funny song, and one which artfully perpetuates Kozelek’s persona as a middle-aged grouch that he cultivates so assiduously at gigs nowadays. Maybe, too, it’s a calculated move to drum up a little controversy and notoriety, and – like the tale of meeting Anton LaVey in “Hey You Bastards I’m Still Here” – a tactical attempt to deflect attention away from the ruefully self-flagellating lyrics elsewhere on “Mark Kozelek & Desertshore”. They don’t detract in any way from a tender detailing of his uncles’ deaths and how his father responded to them (“Brothers”), or meditations on mortality prompted by the passing of his peers (Tim Mooney on “Tavoris Cloud”; Jason Molina on the amazing “Sometimes I Can’t Stop”, a song that, like “Somehow The Wonder Of Life Prevails” from “Perils…”, ranks as one of his very best). It just all presents Kozelek as a plausibly complex figure – one who admits “at the age of 46, I’m still one fucked up little kid.”

Desertshore, meanwhile, provide the sort of empathetic support that recalls the backdrops Kozelek used in one of his strongest periods, around Red House Painters’ delayed last album, “Old Ramon” and Sun Kil Moon’s debut, “Ghosts Of The Great Highway”. If the relationship between Kozelek and the band seemed sketchy, exploratory on “Drawing Of Threes”, it feels fully resolved this time, as the band flesh out his ruminations with cycling, almost Tortoise-like figures on “Katowice Or Cologne” and “Seal Rock Hotel”, or bulk up with a Crazy Horse trudge (a mode that suits Kozelek, and that he should revisit more often) for “Livingstone Bramble”.


Connolly’s work is especially great on “Brothers”, and on the little flourishes he adds to the end of “Mariette”, playing with a looseness that complements that familiar sense of Kozelek improvising his lyrics on the spot. It feels like fine craftsmen working with a mediated kind of spontaneity, and it suggests that, in the disappointing eventuality of anyone having fallen off the Kozelek wagon these past few years, this might be the album to bring you back onboard. Oh, and “You Are Not Of My Blood” wouldn’t have been out of place on the Rollercoaster album. How’s that sound?