At the end of November 2012, Low released a short video trailer for their forthcoming tenth full album, “The Invisible Way”. There is some static, and Mimi Parker talking about some “exceptional peaches”, then a cascading piano line fades in. After 44 seconds, and before the clip has revealed much of a shape as a song, the clip ends. 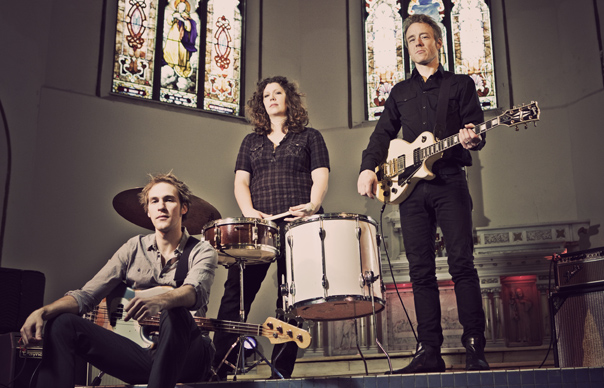 At the end of November 2012, Low released a short video trailer for their forthcoming tenth full album, “The Invisible Way”. There is some static, and Mimi Parker talking about some “exceptional peaches”, then a cascading piano line fades in. After 44 seconds, and before the clip has revealed much of a shape as a song, the clip ends.

The music, it transpires, is from “So Blue”, the third song on “The Invisible Way”, and the choice of that resplendent snippet is significant. Low have spent the past few years experimenting with various expansions and variations on their beguiling formula, culminating with 2011’s “C’Mon”; a kind of plush sampler of Low’s microscopically evolving moods.

On “The Invisible Way”, however, Parker, Alan Sparhawk, Steve Garrington and their new producer, one Jeff Tweedy, have focused on a more homogenous sound. Guitars are used more sparingly than ever, and are mostly acoustic: Sparhawk cuts loose only once, with a sluggardly, protracted solo on “On My Own”, the latest Low song to make us rethink the frequently pejorative implications of the word “dirge”. The sound is somehow warmer, though far from mellow. And the dominant instrument is, more often than not, a piano, subtly altering once again Low’s schtick: a discreet blend which seems so familiar and minimal, but which repeatedly reveals itself, to those listening closely, to have potentially infinite shades.

The first full song to be leaked from “The Invisible Way”, and the album’s opening track, is “Plastic Cup”, which alludes to getting high and drug tests, and goes off on recriminatory, obscure tangents which will prove to be typical of Sparhawk’s latest songs.


There’s a new Retribution Gospel Choir album in the pipeline, and Sparhawk’s classic rock tendencies here tend to be more restrained than of late: if there’s a Neil Young echo, it’s of “Harvest” (on “Amethyst”, most pointedly) rather than something involving Crazy Horse. One, rather fraught and strained, song is called “Clarence White”, though it ultimately seems to be another one of his conflicted intimations of apocalypse. “Mother”, meanwhile, initially appears to reveal uncomfortable mother-son intimacies before, again, broadening into a stern Mormon evocation of Judgment Day.

These are all fine and intriguing, as you can probably imagine, but it’s hard to think of another Low album where Mimi Parker has felt so much in the ascendant. She fronts five of the 11 songs, with Tweedy repeatedly tweaking the Low trademark harmonies, so that she appears to be backed by her own voice rather than that of her husband. The country-gospel “Holy Ghost” is outstanding, in which she “feeds my passion for transcendence” and details the mix of strife, intuition, faith and perseverance – that seems increasingly pointed in her songs – with a vocal strength and clarity that, too, apparently grows with each album.

Best of all, there’s “Just Make It Stop”, the album’s fastest and most insidious song; “I’m close to the edge/I’m at the end of my rope/The rope is starting to fray/I’m trying to keep my hold.” It’s tempting to project various psychodramas onto Low albums, particularly when Parker’s songs increasingly focus on relationships, and Sparhawk’s spin off on portentous allegorical tangents. But “Just Make It Stop” feels in some small way a critical song, in which Parker’s musical persona of calm forbearance, so assiduously maintained for over 20 years, seems stretched, finally, somewhere close to breaking point.

An interview I conducted with the band in Duluth, February 2011

A blog about “C’Mon”