Los Lobos on their best albums: “The most painful stuff results in your best work” 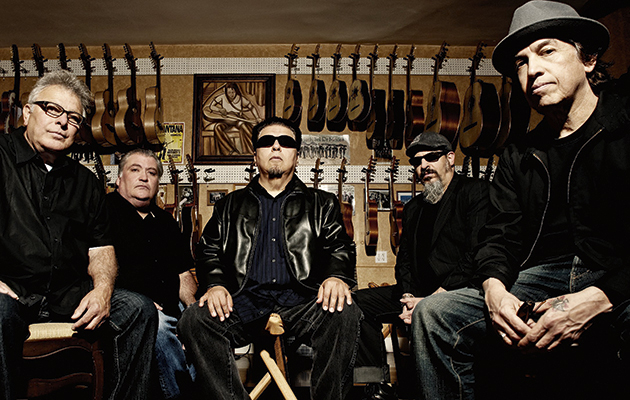 Since self-releasing their 1978 debut, Just Another Band From East LA, Los Lobos have operated outside the mainstream, making consistently brilliant LPs on limited resources. Drummer Louie Pérez, singer/guitarists David Hidalgo and César Rosas, and bass player Conrad Lozano formed the band soon after graduating from Garfield High School in 1973, stirring together trad Mexican music, rock’n’roll, blues, R’n’B, country, folk and Tex-Mex, eventually rising to the exalted status of Great American Band. Lobos reminded audiences of their greatness while touring the US and Europe this summer with Neil Young & Crazy Horse. “It’s a great match – two bands who love to play real raw rock’n’roll, says Hidalgo. “It’s a real honour and treat to get to play with our friends and musical compadres.” From Uncut’s September 2013 issue (Take 196).

Los Lobos’ seven-track Slash Records debut formed their blueprint with its mix of originals, a Mexican folk song and a Ritchie Valens cover.

DAVID HIDALGO: When the Lobos started, we were learning Mexican folk. It was like looking for the blues; we were trying to find our roots. We grew up with Mexican music all around, but we didn’t pay attention. When we tried to play it, it opened the door to our own culture. The EP was pretty much what we were playing live and our first attempt at writing for the band.

STEVE BERLIN (saxophonist/producer): I was a member of the Blasters, who were in the process of falling apart, so I threw myself into being around Lobos as much as possible, which wasn’t hard to do since they were playing so much, not only all over town in the clubs but also their neighborhood thing, where they’d play for weddings, quinceañeras, political rallies. I was also hangin’ around Slash and bugging [label head] Bob Biggs to sign Los Lobos, which he did, although he didn’t think there was anything there. The deal was, I was gonna produce them and, as I had produced hardly anything, Biggs said, “Why don’t we get T Bone [Burnett] in?” We cut the EP in less than two weeks. Since Biggs had signed them just to get his friends off his back, we just wanted to get it out and see what happened. We wound up winning a Grammy, and somewhere in there, I ceased being a Blaster and became a Lobo.

LOS LOBOS
HOW WILL THE WOLF SURVIVE?
SLASH/WARNER BROS, 1984

The band’s first widely heard record puts them on the map. They tied for ‘artist of the year’ with Springsteen in the Rolling Stone critics’ poll.

HIDALGO: After the EP came out, we realised that somebody’s listening, so we should have something to say, and “Matter Of Time” was the first commentary about our situation.

BERLIN: We had risen up the food chain, and Slash had been subsumed by Warners, so this time we weren’t trying to sneak in the back door any more – we were making a real record. One day in rehearsal, Dave came in and started playing the chords of “Will The Wolf Survive?”, and I thought to myself, ‘This song changes everything’, and it did. It was the first time we’d assimilated all our stuff and created something that was quintessentially us. It was an epiphany.

HIDALGO: The way “Will The Wolf Survive?” came about was, Dave Alvin [of the Blasters] said, “You guys need an anthem,” and I took it to heart. We were flippin’ through a National Geographic and it had a wolf running across a frozen lake. The next story showed this old farm hand sitting by the side of the road. We put the last verse together about the punk rockers, because the punk scene blew it wide open for the roots-rock movement. That was our in, because we were playing Mexican folk music and started mixing up Tex-Mex with rock’n’roll.

The title song from Taylor Hackford’s 1987 Valens biopic La Bamba vaulted Lobos to No 1, but the next few years proved to be a dispiriting slog. Figuring they had nothing to lose, Hidalgo and Pérez let their imaginations run wild. Cue dreamlike excursions (“Dream In Blue”), hardscrabble narratives (“Short Side Of Nothing”), and fiery blues-rock (“Whiskey Trail”).

HIDALGO: Sometimes the most painful stuff you go through results in your best work.

BERLIN: This was post-“La Bamba”, La Pistola Y El Corazón [1988] and The Neighborhood [1990], which was really hard to make and took forever. We came home from the tour that followed The Neighborhood broke, frustrated and pissed off. So we licked our wounds for a while, and when it came time to think about the next record, it was a tough time because we’d wasted so much money. We figured we had nothin’ to lose – we were just gonna do what we wanted and not listen to anybody. We cut about six demos, and me, Louie and Dave went over to Warners to play them for [label president] Lenny Waronker. He loved them and gave us the green light – every one of those demos wound up on the album – but he wanted us to work with Mitchell [Froom] again.

HIDALGO: Mitchell had produced the single of “La Bamba” and “Angel Dance” on The Neighborhood, so we were friends, and he brought in [engineer] Tchad [Blake]. We had a few things started when we got back to the studio, and I remember saying, “Man, some backwards guitar would sound good on this.” Tchad flips the tape and says, “Go ahead, try it.” “Just like that? It’s that easy? Wow.” That’s when I discovered you can have fun in the studio. Before that, it was always a pain. Louie and I had a few ideas, and we took them in, and we’d just go in and try to capture that first impression. So that was a big step for us, and we learnt a whole lot. It was a great time. Thank God the material was comin’. When it’s time to do an album and you try to put material together, you don’t know what you’re gonna come up with, and sometimes you get lucky.

BERLIN: A lot of the sound of that record was us not knowing the songs at all – it was the spark and the heart and the sound of searching. Pete Thomas played drums, and he was really key to the process as well. He was so inventive and always wanted to try crazy shit. Everybody who was involved in that record was pulling on the same side of the rope. It was an extraordinary experience – every initial idea sounded magical.

LOUIE PEREZ: With Kiko, there was just something going on that was otherworldly while it was happening; we just watched it twist and turn and float around in front of us.