Graham Nash on Neil Young: “It’s incredible how prolific he was” 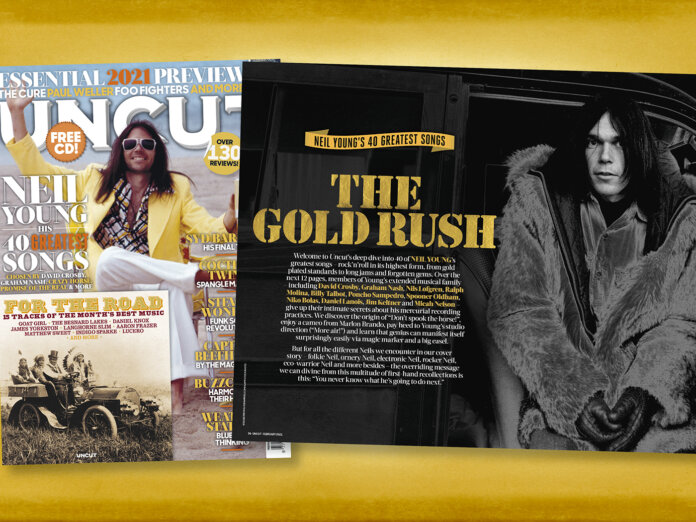 We discover the origin of “Don’t spook the horse!”, enjoy a cameo from Marlon Brando, pay heed to Young’s studio direction (“More air!”) and learn that genius can manifest itself surprisingly easily via magic marker and a big easel.

Here’s just a tiny sample of some of the great stories encountered in the magazine:

GRAHAM NASH on ONLY LOVE CAN BREAK YOUR HEART
(After The Goldrush; 1970)

That song means a lot to me because Neil wrote it about me and Joni. It’s such a beautiful song. I knew it was about me the day Neil played it for me at Stephen’s house in Laurel Canyon. It’s a beautiful song and it was incredibly important for me to hear what Neil had said because he was dead right, it is only love that can break your heart. We are strong, mankind, but these love things can really trip you up. He was only 24 when he wrote that. It’s incredible how prolific he was. At this time, Neil would come to rehearsals with us as CSNY and then at the end of the day we’d go about our business and we didn’t know he was going into the studio to record a solo album. It’s been amazing to watch Neil become this great artist. When we were first together as CSNY we all realised how talented he was. I personally feel that Crosby, Stills & Nash and Crosby, Nash, Stills & Young are two completely different bands because of his talent and the difference that it makes. Over the years, I accumulated 28 handwritten documents by Neil containing original lyrics they had had left behind at studios or given to me. A year or so ago, he decided to sell his archive to a university in Canada and he asked me if I still had those lyrics. I said I did. I’d valued them at $800,000 but I realised that Neil wanted them, I realised how much money I had made because of his talent, and I gave them to Neil with a good heart. If Neil wanted his stuff back, he could have it.

BILLY TALBOT on LIKE A HURRICANE
(American Stars ’N Bars; 1977)

I remember it all happening very fast. Neil was right there, he was ready, he had that song in his head and we just tagged along. He sang it and before you knew it we’re already in the chorus. We recorded it and then we went back and added the harmonies and then it was done. Boom. It was like a hurricane. It blew in and then blew out. It’s a very strong vocal performance and he did that live in the studio as he played the guitar. That was always very cool to watch and because he sings live on most of his records, you know what when you go to a show that’s what you are going to hear. It’s what you are familiar with and there it is in front of you. He improvised that guitar. He was singing and playing guitar, supporting himself in the song. It’s because he comes from a folk background he can do that, the only difference is that he’s playing an electric guitar rather than an acoustic one. He simplifies things a little bit because of the nature of the beast, the electric guitar, but when he’s done singing and goes into the solo, that’s real. He doesn’t have it mapped it, he’s just going for it. I love the way “…Hurricane” opens. We did that as an edit so it started from the best moment because we had been playing a bit before, but it wasn’t so good until that point. I never really think about how a song will endure when we’re making it but a while after it came out, I heard “Like A Hurricane” on the radio when I was driving down to Neil’s ranch, and that’s when I realised: ‘Wow, that one sounds really good.’

This was always a special song to play live. We’d be in an amphitheatre and it would be mid-evening and this moon would hang up there. It made that whole moment very special. I noticed with Neil how often the moon was out when he was recording. I didn’t know if he planned it but maybe he did, like a farmer. I remember the recording session for this pretty well because I liked playing the song. I was on the organ, which is unusual as I don’t usually play organ, but a lot of the heavy lifting for the song was done by Neil and his guitar riff. It’s pretty consistent and that gave us a really good bed to work with. What makes Neil special? He has all the great qualities you want from a songwriter. He writes good songs, he’s a great musician, his singing is in a different category, and he is a great entertainer – a lot of people can do one or two of those things but not many can do them all.

You can read about the making of 37 more great Neil Young songs in the February 2021 issue of Uncut, in UK shops now and available online here.