Kurt Wagner reprogrammes the mighty Lambchop… “Take it on the chin!” 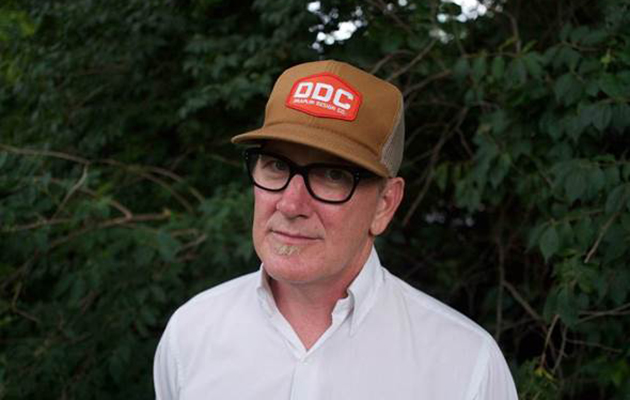 It’s not too much of a stretch to imagine that a record apparently named after the First Lady Of The United States, released four days before a former First Lady will hopefully become president, might have a polemical agenda. Hunting through the crumpled textures and digital folds of Lambchop’s 12th album, however, overt political content is hard to find. A song called “JFK” seems more of an exercise in dislocation, a rifling through of disparate images that coalesce around Kurt Wagner’s repeated declaration he “talks too much”. A lyric hidden in “Writer” might hint at the political climate of the past few months, as Wagner sings about how, “Now we walk with weather most uncertain/Now we weather things beyond control.” Then again, coming from a band who called their most famous album Nixon (2000) mostly out of mischief, it might be some entirely different, private, ordeal.

In fact, if FLOTUS has a subject, it is Wagner’s wife, and the enduring strength and nuances of their relationship. Mary Mancini is currently chair of the Tennessee Democratic Party, and has previously attempted to run for the state senate. Elections and policies, then, provide a wry backstory. In the foreground, emotional realpolitik dominates, so that FLOTUS shapes up as a tender exploration of a longterm marriage, and the acronym actually stands for “For Love Often Turns Us Still”. The first words that Wagner sings on “The Hustle” are “I don’t want to leave you ever/And that’s a long, long, time.”

Those words take a startlingly long time to arrive – five minutes, to be precise. You may already have encountered all 18 minutes of “The Hustle”, as radical a statement of intent as this capricious and cherishable band have ever made. For while Wagner has dabbled on the periphery of electronic music before, “The Hustle” and FLOTUS signify a wholehearted co-option of 2016 aesthetics into the Lambchop sound. These are songs built on a peculiarly hazy beat science, where Wagner’s cracked voice is manipulated through the magic of Autotune and myriad other digital processes. The horny-handed earnestness of Americana as some perceive it seems a long way away, as “Directions To The Can” tears away at the structural norms of a song. “It’s all in the modern problems,” Wagner counsels, “Take it on the chin.”

The miracle of FLOTUS, though, is how gracefully Lambchop negotiate the entente between their country-soul of old, and this brave new world. If Bon Iver’s 22, A Million sounds, to these ears at least, rather cluttered and overthought in its technological innovation, FLOTUS is remarkable for its perhaps illusory effortlessness. The space and measure of great Lambchop records like Is A Woman (2002) remain; the sense that there is time to breathe, and consider a whole spectrum of feelings, between each note. Even in the fractured terrain of a song like “Directions To The Can”, faithful retainers come to the fore: Matt Swanson, providing a through line with his discreetly funky bass; the pianist Tony Crow, a master of the minimalist fleck to the degree that he stands comparison with Chris Abrahams from Australian jazz improvisers, The Necks.

Autotune has become such a crutch for a certain kind of performer, these past few years, that its potential to synthesise sadness now feels rather clichéd. Wandering through a festival last summer – or through radio stations most days – it felt as if navelgazing solo artists in the vein of James Blake, and an attendant school of digitally enhanced moping, had become the new norm. Wagner, though, is still too whimsical a presence to be comfortably absorbed into a genre. His experiments betray the delight of a shy man able to subsume himself into the warp and weft of his music, and the joy of a smoker who discovers that his disintegrating voice can be reconstructed, and those lost high notes can be relocated. FLOTUS suggests, even, that the technology is kinder and more interesting when applied to singers whose voices are not naturally melismatic. The setting of “Directions To The Can” might be more audacious, but Wagner hasn’t been this close to Curtis Mayfield’s upper range since “What Else Could It Be?” on Nixon.

As one might expect of southern gentlemen, the shocks of FLOTUS are deployed by stealth, at least initially. For its first 30 seconds, as the flesh and blood band ease into the genteel groove of “In Care Of 8675309”, you could even be listening to one of those latterday Lambchop albums that have maybe been a little too easy to take for granted. A peremptory click of drumsticks, however, heralds the arrival of Autotuned Wagner, an electronically-augmented interloper in comfortingly familiar environs. Over 12 minutes, he pieces together an impressionistic narrative that keeps looping back to the “house of cancer” next door to Wagner and Mancini’s place; a property, blessed with asbestos siding, whose inhabitants would blast out the contemporary hip hop that fed into the Lambchop sonic upgrade.

More than those neighbours, though, it is the musical choices at work inside his own home that dictate the form of FLOTUS. The title track is like a vintage country ballad chopped and screwed into a groggy new shape, with its old-fashioned sentiments intact. “We used to be like children, we’ve taken a lot of turns, girl,” serenades Wagner, his authentic croak retuned to a sweeter frequency, “Still I wish it wasn’t late.” Yo La Tengo are a recurring reference point, as Wagner makes explicit with the mix CD that comes free with this month’s issue of Uncut, and there’s a further parallel with how Ira Kaplan and Georgia Hubley write about love: the small observations that accrue significance over time, the trials and changes that can affect but not, hopefully, destabilise a longterm relationship. It might not be immediately visceral subject matter like the hormonal gush of new love, or the trauma of a break-up. But “For Love Often Turns Us Still”, just like Yo La’s And Then Nothing Turned Itself Inside-Out, is a testament to the artistic potential of romance sustained deep into middle age, and beyond.

“And I can take your lovin’,” Wagner coos at the end of “FLOTUS, “And I can take your love.” And FLOTUS itself emerges as the most selfless of gifts: not just because Wagner dedicates himself lyrically to Mancini, but also because the radical changes in Lambchop’s sound are designed specifically to appeal to her. Where once there was a band of 12 or more people to realise Wagner’s vision, now, at the heart of the project, there is only him, sat at the computer and crafting an album intended to satisfy her tastes, as well as her emotions. Over a 20-year career of oddities and paradoxes – how, we asked, can so many musicians make so little noise? – FLOTUS ranks as one of Lambchop’s most confounding to date: an album whose form and content are united in intimate, private purpose, but which may well turn out to be one of their best and most accessible.

“The Hustle” describes a Quaker marriage ceremony in rural Tennessee, and how the solemnities devolve into a dance party. There is a storm, and one of those wedding guest revelations about their own relationship, in the midst of a bigger celebration. “We’ll have sunshine/filtered through the phases of the fall,” Wagner sings, his own voice unfiltered now, “And I fell so very hard/For you.”