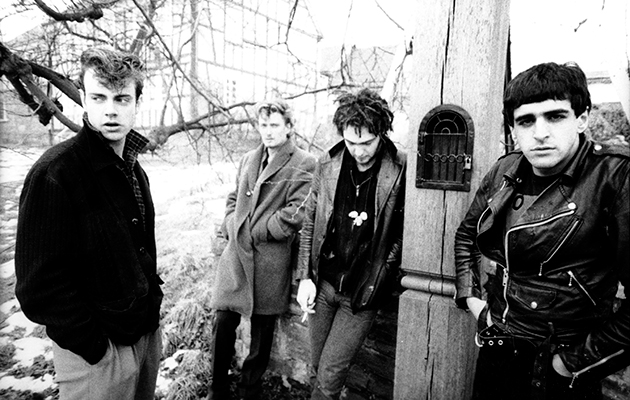 Jaz Coleman is late. This isn’t unusual for a man who once absconded to Iceland without telling his band, forcing Killing Joke to appear on Top Of The Pops with a roadie in a beekeeper’s suit pretending to be the singer. In fact, as recently as 2012, he disappeared for a couple of weeks before resurfacing in the Western Sahara, having decided to go off-grid to write a symphony.

Admittedly, given his history, a 20-minute wait in the Columbia Hotel bar in Lancaster Gate might hardly seem quite so dramatic. The previous evening, Coleman gave a two-and-a-half hour talk in London on some of his favourite subjects – geometric energy, self-education, Rosicrucianism, islands – and when he eventually arrives at the hotel, he’s still full of energy and good cheer, carrying with him a heavy bag full of esoteric literature purchased from Atlantis, his favourite occult bookshop. Coleman – along with the other original members of Killing Joke – is meeting Uncut to look over the band’s extraordinary 36-year career ahead of the release of Pylon, their latest studio album. “Killing Joke is how we process our world,” explains Coleman, peering through his beetle-black fringe. “It’s exorcism, therapeutic. There are times in my career when I’ve wondered if it’s been a force for good, but I believe it’s had a beneficial effect on everybody that’s been involved in it.”

That hasn’t always been apparent, of course. Killing Joke were founded in the squats of Notting Hill, where they perfected a heady, nihilistic blend of punk and dub. Their commitment was intense, and some of the band barely escaped with their sanity. As Killing Joke’s bassist, Martin ‘Youth’ Glover, admits later, “There’s been overdoses, alcoholism, violence, nastiness and betrayal upon betrayal of Shakespearean proportions. But it’s a priceless legacy. Such pure energy uncompromised by commercial concerns. It’s challenging, it’s difficult, everything rational says don’t do it. Which is precisely why I do.”

Glover’s belief is shared by his colleagues – Coleman, guitarist Kevin ‘Geordie’ Walker and drummer ‘Big’ Paul Ferguson. Even though the original lineup have occasionally taken a break from one another – to write symphonies, record with
Paul McCartney or pursue a secondary career as an antique restorer – they have always returned to Killing Joke.

“You rarely see a band come back together and still be as powerful,” says producer Chris Kimsey. “A lot is about Geordie’s guitar, the chord shapes, the tone. And Jaz has tremendous musical knowledge of harmony and melody, but keeps it very primitive with Killing Joke. There’s immense power. They are also four of the most opinionated people ever. But they don’t argue about music, they argue about everything else.”

Indeed, it is unusual to find four equally strong figures in a single band. “They are unique,” agrees The Orb’s Alex Paterson, who worked as Killing Joke’s road manager during the ’80s. “They come from four different corners of the universe creating this massive sound and versed in the finer arts of darkness.”

Throughout our interview, Coleman doesn’t deny the darkness – the fights, the run-ins with police, the maggots – but insists the Killing Joke message is a positive one. “Every song is about freedom. We want to confront fear. The idea of laughter connects us all, because when you laugh, you have no fear.”