“I just don’t listen!” An audience with Neil Young 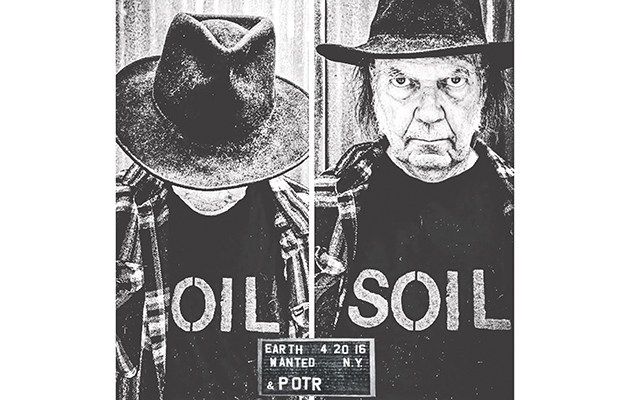 “I just don’t listen,” says Neil Young. He is considering the capricious turns his career has taken and whether, along the way, he has ever listened to any advice offered to him by his fellow musicians. “Many years ago, I was touring in England, maybe 1973,” he continues. “I was playing Tonight’s The Night. We had an opening act, The Eagles. Glenn Frey said to me, ‘Why are you destroying your career? You have this incredible record that came out [Harvest], and everybody loves it. Now you’re singing about heroin and overdoses and cocaine and gunshots and blood all over the car. What are you singing this stuff for? Why do you do this?’ There’s no answer. I don’t have an answer.”

Young is currently in the prestigious surroundings of his UK record company, Warner Brothers, for a bespoke event to launch his latest album, Earth – a tremendous live set recorded on tour with his current backing band, Promise Of The Real. Taking place in a bright, airy space in the middle of the building, which also doubles as the company’s canteen and bar, the event consists of a Q&A followed by a playback of the album. The audience consists of journalists, band members and crew and a smattering of celebrities including Noel Gallagher and the actress Caroline Catz.

High up on a wall – decorated to emulate the sleeve for Pink Floyd’s album The Wall – hangs a large photograph of Young, intended to promote tonight’s event: ‘An evening with Neil Young’. In the photograph, Young is depicted wearing a grey suit jacket and a white hat; he looks spruce and clean-shaven, with his muttonchops neatly trimmed and his eyes bright and clear.

“The guy in that picture, he’s scary,” Young says, gazing at this image of his younger self. “That was a long time ago.” He points at his face. “This is now.”

‘Now’ – aged 70, that is – Young is wearing a black t-shirt with the word ‘Earth’ emblazoned on it. Over that, he wears a grey check shirt while a black hat barely restrains his hair, which is gradually turning white.

Earlier, Young has been 20 minutes late arriving – caught in traffic on the motorway, it transpires – and while we waited, Weld – Young’s 1991 live album with Crazy Horse – was played over the stereo system. It might seem a little unfair to stack an album as storied as Weld next to his current live effort. But hearing Weld so close to Earth helps put this new album into valuable context. Both records find Young and his backing bands at their most rapturous and expansive. Promise Of The Real sound not unlike Crazy Horse, and deliver the crunching riffs, deafening major chords and harmonies that have typified many of Young’s best records.

While Weld offered a pleasing summary of Young and Crazy Horse’s many peaks together, Earth has a different agenda. Recorded on last year’s Rebel Content tour, Earth brings together songs from throughout Young’s career that address his lengthy, quixotic history of eco-activism, stretching back to 1970’s After The Goldrush.

“This album is a natural progression of things that started in my head maybe 5 or 10 years ago,” Young explains. “I started thinking about the concerts that I’d done, the songs that I’d been singing for some years and how I’d come round to focus on things that I think matter now more than my own personal life. So I decided that I’d try to put these songs together – the songs that represented something – in a tour.

As anyone who has followed Young’s career recently will have noticed, he has taken issue with the McCorporations who dominate the agricultural industry. On his last album, The Monsanto Years, he levied a sustained attack against the with agrochemical giant and their patronage of genetically modified seeds.

“In the short run, coffee gets you going,” he says. “But after a while, you have another cup and it’s like any drug, you start taking it. That’s what they’re doing to the land. At first, it seems more productive because its jacked out of its mind, it’s completely going off. After a few years, it can’t sustain that, so it’s over. What’s the solution to that? Luckily, the scientists have come up with the idea that you just use more of the product, then everything will be fine. So more pesticides.”

The purpose of Earth, says Young, is straightforward. “I wanted to say something on behalf of the animals and on behalf of the organic things on earth that are being polluted by all of these GMO seeds and the diversity that we’re losing through all this.”

Among the album’s highlights are several tracks that have not been performed live since the early Seventies, including “Vampire Blues” and “Hippie Dream”. The former, from On The Beach, is an assault on the rapacious oil industry. Young dates the song: “1973,” he says. “‘Sucking blood from the earth’. It sounds good. ‘I’m a vampire / sucking blood from the earth / give me 20 barrels worth’. That’s cool. Over time, it turned out not to be so cool. Not cool at all.”

“Hippie Dream”, meanwhile, reflected Young’s increasing dissatisfaction with the way the Sixties’ ideals had become corrupted. The line, “Just because it’s over for you / doesn’t mean it’s over for me”, was reportedly directed as David Crosby, who was then struggling with a heavy drug habit.

“That was me speaking to a drug addict that was wasting a lifetime,” Young acknowledges. “But it’s not what songs are about. People say things because they feel them, but if you really feel it, really believe it, then everybody everywhere feels that you really believe what you said then they apply it to their lives. It’s not precisely what I was talking about. They have a feeling, they can latch onto that as being authentic and real then they can actually ride and go wherever they want to go with it.”

“I’m a rocker,” concludes Young. “I just sing what I believe and what I’ve learned. I’ve studied it, I’ve spent a lot of time doing that and I take it very seriously.”

EARTH is released on June 17 by Reprise