Judd Apatow’s This Is 40

Since Judd Apatow inherited the mantle of Hollywood’s king of comedy, one of the criticisms most frequently levied at him involves his willingness to promote those closest to him. 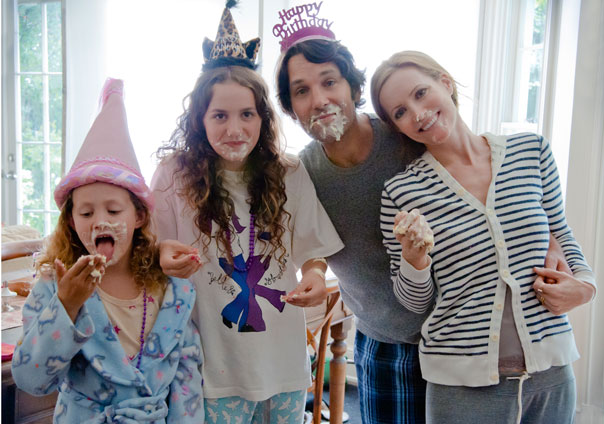 Since Judd Apatow inherited the mantle of Hollywood’s king of comedy, one of the criticisms most frequently levied at him involves his willingness to promote those closest to him.

His CV – longer than you’d think, stretching back to the mid-Nineties – is heavy with projects he’s shepherded by friends and protégés. With This Is 40, it seems Judd Apatow is now pimping not only his own wife and daughters, but he’s also mining his home life for laffs.

This Is 40 finds filmmaker Judd Apatow reconnecting with characters from his 2007 film, Knocked Up. Principally, married couple, Pete (Paul Rudd) and Debbie (Leslie Mann; Apatow’s wife), who are both reaching 40 in varying states of denial. Pete runs a small record label – his sole signing are the reformed Graham Parker And The Rumour – while Debbie owns a boutique. They have two children, Sadie and Charlotte (Apatow’s own daughters, Maude and Iris) and live in a bright, airy home in the LA suburbs. “We’re at the point where everything we say annoys each other, it’s a blast,” Pete confesses. They are evasive. Pete sits in the toilet playing games on his iPad at any given opportunity. Debbie smokes cigarettes wearing rubber gloves and with her hair in a towel, to avoid smelling of smoke. Around them, there is other shit. A employee is stealing from Debbie’s boutique, while both Pete and Debbie are stuck with awful, awful fathers (Albert Brooks and John Lithgow). At their worst, these characters appear shallow and immature, and it’s not entirely clear how they can afford a lifestyle that includes personal trainers, estate cars and original John Lennon art from their salaries (which in Pete’s case is negligible).

Interviewed in today’s Time Out, Apatow is keen to put some distance between his characters and his real domestic situation. “The story is made up,” he says. “Really it’s more about our anxieties. We worry about being good parents to the point of making our kids crazy. We try to change each other when we should be trying to change ourselves. Working with Leslie on this movie was like very expensive therapy.”

One of the director’s favoured tropes is the idea of prolonged adolescence; it’s certainly telling that when Pete and Debbie finally get away from their kids for a weekend break, they choose to get stoned on hash cakes and stuff themselves on junk food. At close to two and a half hours, it feels very long for a comedy, but it’s hard to know what to cut. The film hangs together well, and even digressive cameos from members of Apatow’s stock company like Jason Siegel and Chris O’Dowd don’t feel entirely gratuitous. But Apatow’s focus is very much the plight of Pete and Debbie, and by extension it addresses universal issues about people in their 40s who had children while they were relatively young.

This Is 40 opens in the UK this Friday