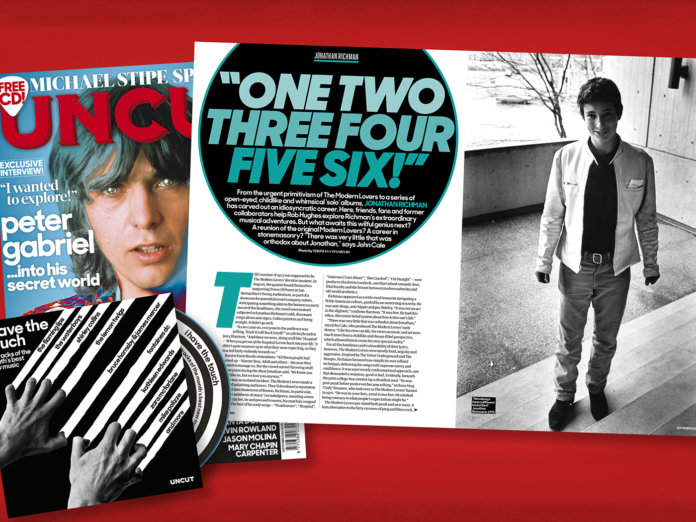 From the urgent primitivism of The Modern Lovers to a series of open-eyed, childlike and whimsical ‘solo’ albums, Jonathan Richman has carved out an idiosyncratic career. In the current issue of Uncut – in shops now or available to buy online by clicking here – friends, fans and former collaborators help Rob Hughes explore Richman’s extraordinary musical adventures.

The summer of 1973 was supposed to be The Modern Lovers’ decisive moment. In August, the quartet found themselves supporting Tower Of Power at San Bernardino’s Swing Auditorium, as part of a showcase for potential record company suitors. Anticipating something akin to the boisterous party mood of the headliners, the crowd were instead subjected to Jonathan Richman’s odd, dissonant songs about auto signs, Cubist painters and being straight. It didn’t go well.

“As we came on, everyone in the audience was yelling, ‘Rock’n’roll! Rock’n’roll!’” recalls keyboardist Jerry Harrison. “And there we were, doing stuff like ‘Hospital’ – ‘When you get out of the hospital/Let me back into your life.’ It didn’t quite measure up to what they were expecting, so they reacted fairly violently towards us.”

Bassist Ernie Brooks remembers: “All these people had turned up – Warner Bros, A&M and others – because they wanted to manage us. But the crowd started throwing stuff. At one point during the show Jonathan said, ‘We know you don’t like us, but we love you anyway.’”

This was no isolated incident. The Modern Lovers made a habit of polarising audiences. They’d developed a reputation around their hometown of Boston. Richman, in particular, was the antithesis of starry ’70s indulgence, standing centre stage in jacket, tie and pressed trousers, his neat hair cropped short. The best of his early songs – “Roadrunner”, “Hospital”, “Someone I Care About”, “She Cracked”, “I’m Straight” – were products of a distinct outlook, one that valued romantic love, filial loyalty and the frisson between modern suburbia and old-world aesthetics.

Richman appeared as a wide-eyed innocent navigating a fickle American culture, guided by an unnerving sincerity. He was anti-drugs, anti-hippie and pro-fidelity. “It was not an act in the slightest,” confirms Harrison. “It was him. He had this ethos, this entire belief system about how to live one’s life.”

“There was very little that was orthodox about Jonathan,” says John Cale, who produced The Modern Lovers’ early demos. “Like his views on life, his views on music and art were much more from a childlike and dream-filled perspective, which allowed him to create his own special reality.”

You can read the full six-page feature on Jonathan Richman in the September 2020 issue of Uncut, out now with Peter Gabriel on the cover.