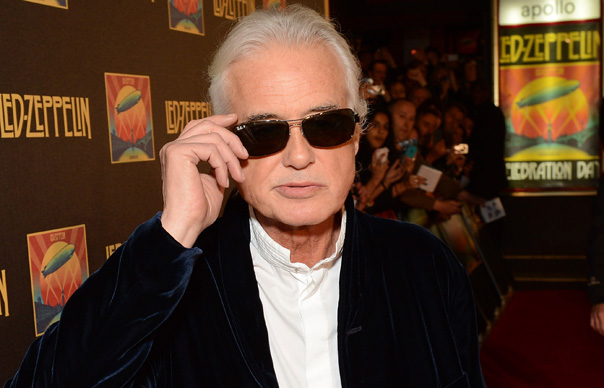 Here’s an enlightening, in-depth interview with Jimmy Page, from Uncut’s May 2005 (Take 96) issue, taking in everything from the Grammy Awards to what it’s like being the keeper of the Led Zeppelin flame. Words: Nigel Williamson
_____________________

Monday, February 14, 2005. It’s the morning after and Jimmy Page is in Los Angeles celebrating Led Zeppelin’s first ever Grammy. The only thing that’s riling him is the failure of Robert Plant to turn up.

“It wouldn’t have taken much to pop over here and meet everybody, would it?” he grumbles to anyone who will listen.

Fast-forward one week and, back in London after receiving the Lifetime Achievement Award, Page has come to accept his former partner-in-crime’s absence. “I’m sure Robert had good reasons,” he observes diplomatically.

But Page still makes no attempt to conceal his own delight at the belated recognition by the American music industry, which for years seemed to begrudge Led Zep their success.

“I’m sure people must have thought we’d been nominated in the past,” he says. “But, you know, we never even got a single Grammy nomination until now. I never thought it would happen. So, of course, I really enjoyed it.”

That they were overlooked for so long verges on the perverse. Led Zeppelin sold some 70 million albums in America. The band’s fourth release alone found a place in 18 million American homes, making it the fifth best-selling album in recording history. Among British groups, only The Beatles have outsold them.

Yet the American rock establishment never quite approved of Led Zeppelin. Too cocky. Too loud. Too damn successful, and not afraid to enjoy the trappings of that success to the hilt. “Give an Englishman 50,000 watts, a chartered Lear jet, a little cocaine and some groupies and he thinks he’s a god,” Rolling Stone once sneered at the height of Zep’s success.

Today, Page can afford to laugh off such brickbats. “After a while there was no point in caring about what anybody said,” he shrugs. “We knew what sort of quality we had and so did the fans.” And, in the end, Rolling Stone was more right than it realised. In a way, Led Zeppelin were gods, and their dominance of ’70s rock’n’roll – particularly in America – was every bit as mighty as The Beatles’ in the ’60s.

For the 25 years since the band broke up, Jimmy Page has been the main keeper of the flame and custodian of the Zeppelin legacy. Robert Plant couldn’t wait to get out from under the group’s shadow and make a new life. John Paul Jones has similarly distanced himself from his past. And John Bonham, of course, is sadly dead.

Which leaves Page. It was the guitarist who remastered the Zeppelin catalogue for a 10-disc box set at the beginning of the ’90s. And it was Page who painstakingly pieced together the posthumous live album How The West Was Won and the recent Led Zeppelin DVD, which swiftly became the best-selling music release in the short history of the format.