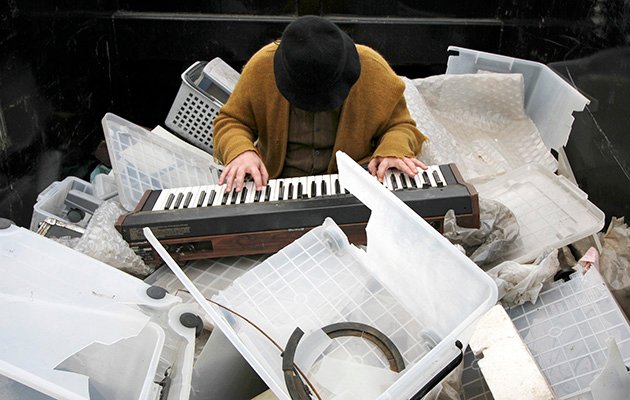 We’re seven days away from the next issue of Uncut going on sale, so I probably shouldn’t talk too much about its contents ’til later in the week. One nice thing in there, however, is an extensive new interview with Jim O’Rourke, to mark the arrival of “Simple Songs” (you can listen to Jim O’Rourke’s “Simple Songs” at NPR here), his first set of rock songs in 14 years, out this week.

O’Rourke has lived in Japan for a good while now, and he doesn’t do many interviews, which is a shame given how good he is at them; able to shift effortlessly from lucid discussions about a vast range of music to rock gossip (his story about Jimmy Page, which I’ll save for the issue, is pretty good). There’s a great bit in the interview when Tom Pinnock asks him about “Eureka”, the 1999 set that was O’Rourke’s breakthrough as singer-songwriter rather than avant-gardist, and is still maybe his best-loved album.

“I’m glad people like ‘Eureka’,” he says, “but to me it’s a very sad record. I still meet people and they’re like, ‘I played it at my wedding, it’s so happy’, and I’m like, ‘Oh my God! People think it’s some happy, good-time record.’ So therefore, I failed. I don’t want people to be happy when they listen to my music.

“Japan was the place where Eureka was actually most popular, and to this day there are neo-hippies running around with flowers telling me how it changed their life. I’m like, ‘Your life sucks, I can’t believe I had anything to do with it! It makes me so fucking depressed. I turned you into a hippy.’”

Later, O’Rourke goes some way to explaining “Simple Songs” when he admits, “I’m a Genesis freak. ‘The Lamb Lies Down On Broadway’, that’s my DNA. I must have listened to that more than any record in my life. Everyone who plays in the band is a Genesis freak. We keep talking about doing a Genesis cover band, called Japanesis. Of course, I would be Peter…”

It was, I must confess, Uncut’s Art Editor, Marc Jones, who spotted the Genesis vibes when we started playing “Simple Songs” in the office – the meticulous, melodramatic progressions of “Last Year”, in particular, at least before O’Rourke references another one of his key fetishes, Van Dyke Parks, in the same song. “Simple Songs” is an astonishingly well-crafted album, in thrall to a certain lavish strain of ’70s pomp-baroque, but it’s a subversive one, too, in the way that it makes a virtue of O’Rourke’s deadly serious sense of mischief, his reconfiguring of the rock canon that would seem perverse in the hands of a straightforward classicist, let alone one who’s spent much of his career navigating the outer reaches of avant-garde and improvised music (he admits to having initially dismissed “Confusion Is Sex”, by his old band Sonic Youth, as not being “noisy” enough.)

“Simple Songs” is one of those albums that tests and rewards your faith in an artist’s aesthetic vision, even as they’re taking you to some rather queasy places. The title is a joke, of course (and not the album’s most sophisticated): these are ornate and tricksy constructions, that align post-rock and prog’s constant gear shifts and rigorous compositional fussiness with an at least more superficially saccharine tradition. Moments here make me think of Andrew Gold, Eric Matthews (thanks to my colleague John Robinson for that strong spot), even Paul Williams when, at the death of an exemplary and preposterous Hollywood power ballad called “Hotel Blue”, O’Rourke bellows, “All seats are taken!”

When he gives a sly nod to Queen on “End Of The Road”, or ends the album with a finale that matches the throbbing grandiosity of “10538 Overture”, it would be easy to read “Simple Songs”, at least in part, as a prank; a provocateur’s pastiche. O’Rourke, though, is a more complex operator than that. His references and subversions, his games and digs, are oblique and nuanced; his purposes sometimes obtuse; his music more or less infallibly, if not always comprehensibly, excellent.

“It was easy when you were floating above everybody for years,” he sings on the outstanding “Half Life Crisis”, “You can’t breathe in that air if there’s nobody there to gaze at you from below.” The song appears to be an indictment of a supposed bohemian, or avant-gardist, but it’s built on a strutting, piano line and some harmony guitar lines that aren’t a million miles from an old Garson/Ronson combo. “People drop in and drop out of your sight/And that’s what you call a radical life…”