The White Stripes, The Raconteurs, the solo years… Jack White picks an alternative route through his back catalogue. 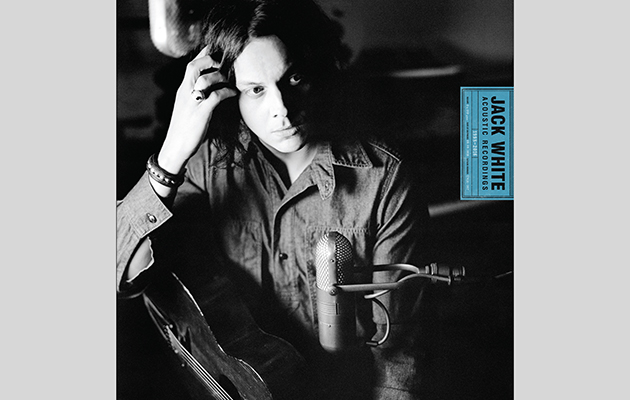 On July 30, a high-altitude balloon left the earth’s atmosphere and, 28,000 metres above the planet’s surface, played a gold-plated record on a space-proof turntable. “We could not be happier to check this longtime goal off its bucket list,” announced the project’s instigators, Third Man Records of Nashville, Tennessee. The label’s founder and figurehead elucidated further in the press release. “Our main goal from inception to completion,” said Jack White, “was to inject imagination and inspiration into the daily discourse of music and vinyl lovers.”

Injecting imagination and inspiration into the daily discourse of music lovers. It’s a resonant phrase, and one which works pretty neatly as a mission statement for Jack White’s endeavours these past 18 years. Surveying the thirteen albums, 11 live albums, multitudinous singles, lavish whims, capricious digressions and so on that constitute his discography is a daunting business. And while Third Man’s capacity for invention and reinvention marks them out as innovators among record labels, they’ve steered clear of any White boxsets or compilations. Up until now, there’s been no easy way into the cumulative catalogue of The White Stripes, The Raconteurs, The Dead Weather and White’s solo activities.

As you’d imagine from White, Acoustic Recordings 1998-2016 is not much like an orthodox greatest hits: only three of its 26 tracks, most notably “Hotel Yorba”, were released as singles. For those millions whose understanding of White’s canon begins and ends with the chanted riff of “Seven Nation Army”, much will be rather baffling. The cover appears to signal the intent – a black and white shot of White cradling his Gibson L-1 acoustic, a guitar which is now 101 years old – as does hiring Greil Marcus to write the sleevenotes. Here is White arraying himself in the signifiers of antiquity, as a creature of folklore, as an emissary from the Old Weird America.

Marcus’ essay spends an inordinate length of time discussing one of White’s heroes, Son House, and it’d be logical to assume that Acoustic Recordings would concentrate on the blues. But the music here is generally much harder to categorise in such reductive terms, and not all the tracks even feature a guitar: it’s a pleasure, for instance, to revisit the baroque weirdness of 2005’s “Forever For Her (Is Over For Me)”, and how it constructs hysterical melodrama out of piano, marimba and Meg White’s brute artisanship.

A clutch of tracks are clearly exercises in genre, like the Raconteurs’ sawing “Bluegrass Version” of “Top Yourself” (a 2008 b-side), or the beautifully fingerpicked “Never Far Away”, from the mostly forgotten environs of the Cold Mountain soundtrack (2005). What Acoustic Recordings best illustrates, though, is a consistency to White’s songwriting that has endured through his myriad projects, even as his music has swung unpredictably between playfulness and intensity. From 2001’s “We’re Going To Be Friends” to an alternate mix of 2012’s “Hip (Eponymous) Poor Boy”, there’s an underlying sweetness, a McCartneyish gift for melody, that make many of White’s best songs resemble intricate nursery rhymes. It’s also evident in one of his most controversial works, “Love Is The Truth”, written for a 2006 Coca Cola advert and repurposed here with the shrill horns having been stripped off.

That sort of tinkering happens throughout Acoustic Recordings, ensuring that the tracks adhere to the title’s promise, and proving once again that White is happy to play fast and loose with any notions of authenticity. “City Lights” comes billed as a previously unreleased White Stripes track (dating from the Get Behind Me Satan sessions) but, as Greil Marcus reveals in his notes, was only recently finished with the help of White’s current bandmate, Dominic Davis. Two guitars intertwine with a brackish elegance, and White’s pinched vocal is shadowed by that of Davis, while shakers – a ghost of Meg? – provide minimal rhythm. The resulting track is spectral, mantric, and quite unlike anything in the known White Stripes songbook: one wonders, intrigued, what their original version would have sounded like.

That first version might plausibly surface on another compilation or boxset, as part of a more conventional scouring of the archives than this one. But White’s taste for making mischief with our ideas of the vintage and the modern, of honesty and dishonesty, may predicate against him ever releasing anything quite so straightforward. “[This] is mirror-music,” writes Marcus, “the singer talking to himself, trying to tell himself the truth.” As it has been for nearly two decades now, trying to work out when White is telling us the truth, and when he’s leading us on, is part of what makes him such a compelling artist.

Acoustic Recordings might be unadorned, toying as it does with a concept of unmediated expression, but it brings us no closer to the real Jack White. Perhaps we should just take the advice he gives in one of his very best songs, the rollickingly Dylanish “Carolina Drama”, from the Raconteurs’ underrated Consolers Of The Lonely (2008): “Well now you heard another side to the story/But you wanna know how it ends?” he asks at the end of his messy, vivid narrative. “If you must know the truth about the tale/Go and ask the milkman…”