The 15-track CD is free with Uncut this month 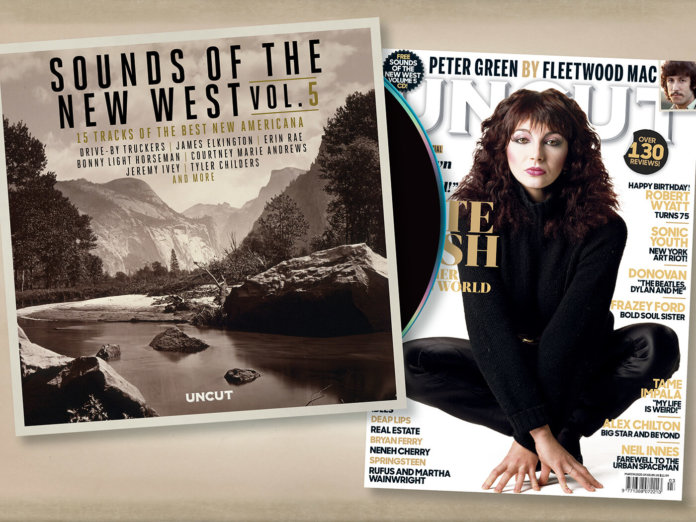 Free with this month’s Uncut – in shops now or available to buy online here – is the latest in our famous Sounds Of The New West compilation series, rounding up 15 tracks of the best new Americana.

Here’s some more detail on all the featured songs:

1 JEREMY IVEY
Diamonds Back To Coal
We start off our latest Sounds Of The New West compilation with this Neil Young-esque gem from Jeremy Ivey. Once part of Southern soul gang Buffalo Clover, Ivey recently stepped out with his debut solo album, produced by his wife Margo Price.

2 ERIN RAE
Love Like Before
Erin Rae McKaskle’s subtle songs and smooth voice can’t disguise the emotional complexity at the heart of much of her work. “Love Like Before”, taken from the Nashville songwriter’s second album, Putting On Airs, pairs Laurel Canyon folk with the kind of circular, infectious songwriting Jeff Tweedy excels at.

3 JAMES ELKINGTON
Ever-Roving Eye
British-born but US-based, Elkington has so far been best known for his work on records by the likes of Michael Chapman and Joan Shelley. His latest upcoming solo album, a stunning mix of Americana and psychedelic folk, is likely to change that.

4 COURTNEY MARIE ANDREWS
Downtown Train
With her customary vocal prowess, Andrews takes on one of Tom Waits’ best-loved songs with this plush, dynamic track from the new tribute album, Come On Up To The House: Women Sing Waits.

5 DRIVE-BY TRUCKERS
Armageddon’s Back In Town
New album The Unraveling finds
the Drive-By Truckers as furious as ever about the state of America, politically and socially, while the anthemic velocity of their heartland rock remains as potent. “There’ll be no healing from the art of double-dealing,” sings Patterson Hood.

6 HAYES CARLL
I Will Stay
With more than a touch of Townes Van Zandt about him, this Texan singer-songwriter created his finest album yet with 2019’s What It Is. “I Will Stay” is the record’s closing track, Carll’s plaintive ballad swathed in simple strings.

7 KELSEY WALDON
Anyhow
White Noise/White Lines was our Americana album of the month a couple of issues back, and “Anyhow” is one of its highlights; a gently rolling song of defiance, it demonstrates just why John Prine decided to sign Waldon to his Oh Boy label.

8 SAARISELKA
Void
The Ground Our Sky is the debut album from this duo of ambient pedal-steel maestro Chuck Johnson and keyboardist and vocalist Marielle Jakobsons. The most structured track on the LP, “Void” is five minutes of drifting bliss, akin to Beach House remixed by Daniel Lanois.

9 FRANKIE LEE
Bad Love
This previously unreleased exclusive from the peripatetic, Minnesota-born artist, who won over hearts with 2019’s Stillwater,
is a shiny, catchy piece of War On Drugs-style electro-boogie, Lee’s fine songwriting clearly on show.

11 TYLER CHILDERS
Country Squire
The opening title track of the Kentuckian’s third album, “Country Squire” is a piece of lively, romantic honky-tonk from one of country’s most quietly enigmatic performers. The perfectly poised production from Sturgill Simpson and David R Ferguson only elevates it further.

12 CARSON McHONE
Don’t You Think I Feel It Too
Here’s a tender cover of David Ball’s song, recorded by Austin rising star McHone. 2018’s Carousel was a strong second album, yet her interpretation here suggests that even better is to come.

13 BONNY LIGHT HORSEMAN
The Roving
Consisting of Eric D Johnson, Anaïs Mitchell and Josh Kaufman, Bonny Light Horseman are something of a deluxe folk collective. Their self-titled debut is a special record, its easy, melancholy vibe as important as Mitchell’s voice or the traditional songs, like “The Roving”, that the group perform.

14 IAN NOE
Letter To Madeline
Noe’s debut album, 2019’s Between The Country, marked the Kentucky singer-songwriter as one to keep an eye on. “Letter To Madeline” is a particular delight, matching the outlaw sounds of Noe’s forebears with his own twilit, Dylan-esque imagery.

15 GILL LANDRY
Trouble Town
Skeleton At The Banquet is the fifth solo album from Landry, formerly of Nashville’s much-loved Old Crow Medicine Show, and “Trouble Town” – written, as with the rest of the LP, in rural France – is a masterful slice of jazz-
influenced noir.

Sounds Of The New West Volume 5 comes free with the new issue of Uncut, in shops now with Kate Bush on the cover.