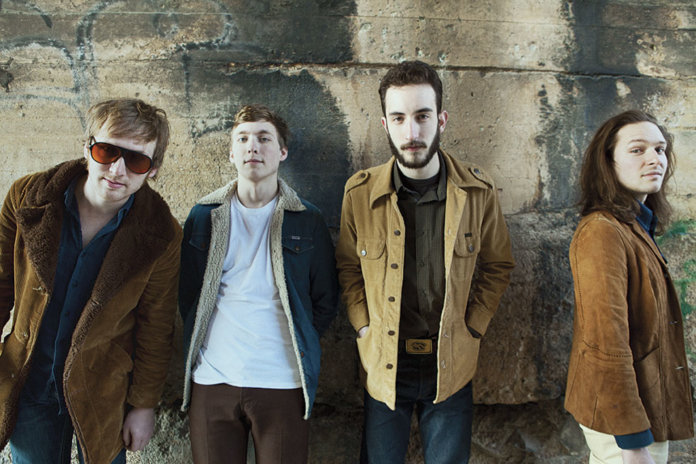 “They’re all youthful scruff and bluff,” it runs, “and they crank out tunes that would be right at home in Link Wray’s 3 Track Shack or hanging with the spectres of long lost 45s that haunt Nashville’s overflowing legend-filled cemeteries.”

As ever, Third Man are very good at this sort of thing. From my angle, though, Promised Land Sound’s fine debut sounds less like Mordicai Jones and more like a Southern analogue to the Allah-Las album from last year. Like “Allah-Las”, “Promised Land Sound” often resembles the work of a mid-‘60s American garage rock band responding to the latest Rolling Stones singles by recontextualising that sound with the tools at their local disposal – cf “Wandering Habits”, my current favourite.

For the Allah-Las, of course, that meant a sort of hazy LA surf twang. For Promised Land Sound, it means some empathetic pedal steel, pinched harmony vocals that stick so close to the lead as to effectively double it (I keep thinking of the Jayhawks, oddly, when I hear “Weed And Wine” or “Fadin’ Fast”) and a few other vague signifiers of country rock – some of which feel, ironically, more like LA extrapolations than Music City productions.

So while, say, “Empty Vase” and “Money Man” present Promised Land Sound as a thrillingly, snottily accomplished Nuggets band manqué, something like “For His Soul” or “Make It Through The Fall” have more of a Gram Parsons feel; maybe how The Byrds might have sounded had he joined the band a year or two earlier?

It’s a selection of neat tricks, anyhow, warmly and vigorously produced by two more fine musicians: Jem Cohen, who was part of that raging Parting Gifts record a couple of years back with Greg Cartwright and Coco Hames; and William Tyler, who’s been everywhere in Nashville these past few years and seems increasingly – and happily – ubiquitous beyond city boundaries. Best of all, the songs are good enough to ensure that “Promised Land Sound” is more than a smart historical re-enactment; it’s just too strong, too enjoyable, to dismiss as merely a loving pastiche.

Anyhow, no tracks appear to have been leaked by Paradise Of Bachelors as yet, but this fairly unrepresentative albeit entertaining clip got posted a couple of days ago, which augurs well for live shows. See what you think…