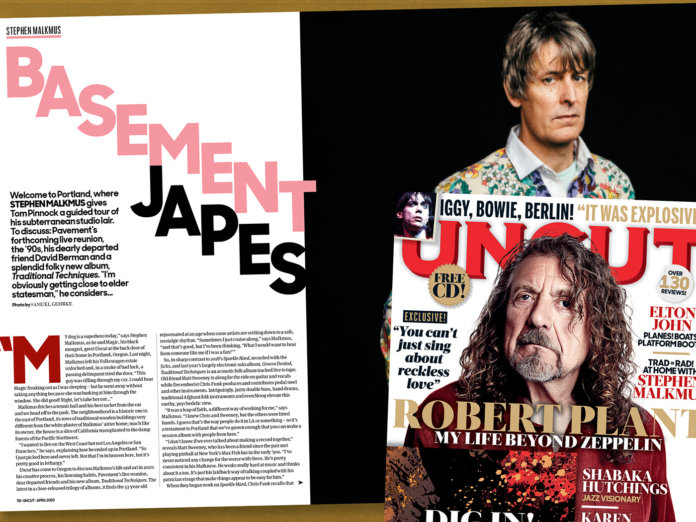 In the latest issue of Uncut – in UK shops now or available to order online by clicking here – we venture to Malkmus’s Portland home to discover the impetus for this intriguing new direction. “Sometimes I just cruise along,” he tells Tom Pinnock, “and that’s good, but I’ve been thinking, ‘What I would want to hear from someone like me if I was a fan?’”

“It was a leap of faith, a different way of working for me,” says Malkmus. “I knew Chris and Sweeney, but the others were hired hands. I guess that’s the way people do it in LA or something – so it’s a testament to Portland that we’ve grown enough that you can make a session album with people from here.”

“I don’t know if we ever talked about making a record together,” reveals Matt Sweeney, who has been a friend since the pair met playing pinball at New York’s Max Fish bar in the early ’90s. “I’ve never noticed any change for the worse with Steve. He’s pretty consistent in his Malkness. He works really hard at music and thinks about it a ton. It’s just his laidback way of talking coupled with his patrician visage that make things appear to be easy for him.”

New single “Shadowbanned” (watch the video below) is a highlight, a droning shanty with duelling riffs from 12-string, 6-string, double bass, flute, Moog and rebab; Malkmus explains that he took partial inspiration for it from an unexpected source.

“Initially I was like, ‘This is gonna be my PJ Harvey song…’ It’s more medieval, of course, but it kinda sounds like a guy playing with 10 sailors. Although once we played it, it didn’t sound like her. I do this high vocal bit – ‘gush, drip!’ – like her. That’s another occasion where I think it’s gonna sound like something, but it never does. When you have limited vocal range, that happens. I wanted to sound like an existential 1972 folk guy like Gordon Lightfoot on ‘Xian Man’. Of course I can never sound like him, because I’m all nasally.

“All the Jicks albums and all Pavement were done in the same ‘classic rock’ style,” he continues, “and the signal wasn’t getting through, in my attempt to react with people the way I wanted. I was trying to think of ways to change things I haven’t tried, and Traditional Techniques was one way of being like, ‘I can just think of these songs differently…’”

You can read much more from Stephen Malkmus in the new issue of Uncut, in shops now with Robert Plant on the cover.