Klaus Voormann on George Harrison: “The Quiet One? He wasn’t quiet at all…”

In the latest issue of Uncut, George Harrison's former friend, flatmate and collaborator remembers a "cocky little boy" of 17 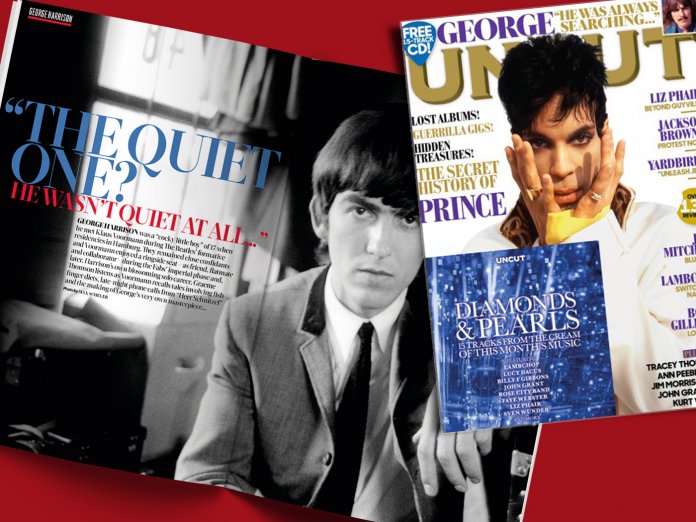 The new issue of Uncut includes a candid interview with Klaus Voormann about his encounter with a 17-year-old George Harrison, during The Beatles’ formative residencies in Hamburg. The German artist and Plastic Ono Band member tells Graeme Thomson tales involving fish finger diets, late-night phone calls from “Herr Schnitzel”, and the making of George’s very own masterpiece…

The first time I saw George he was only 17 years of age. He was very different to how he was later. He was a cocky little boy! This band he was with was completely unknown. It was the autumn of 1960. In this club in Hamburg, the Kaiserkeller, they played for people to dance. George was singing all those funny songs, which he did later on a little bit, when he sat around and played ukulele. He was into songs like I’m Henry The Eighth, I Am, singing it all cockney. He would sing all those Eddie Cochran numbers too, like Twenty Flight Rock.

It took some time to get to know them. We had gone to concerts and jazz clubs, but this scene was completely new to us. We went many times. They had started looking over to us – “There they are again, those Existentialists!” – and we were looking at the stage all the time, seeing all the details. “Look at George, he’s got big ears, hasn’t he! And he has funny teeth – he has those Dracula teeth!”

They were talking on stage in English and our English was not so hot. Eventually [Astrid and Jürgen] said to me, “Klaus, you speak English. Why don’t you make contact so we can meet them?”

John was standing by the stage, and I went over and took the record cover I had designed with me, which was Walk… Don’t Run – by The Typhoons, not The Ventures. I showed it to John, and he said, “Go to Stuart, he’s the artistic one.” Because John was the rock’n’roller, he didn’t want anything to do with art. So I went over to Stuart [Sutcliffe] and we got on like the world on fire. It was amazing, we talked about everything. It was only natural then that in the breaks between shows we went out with Stuart and the others came along, and we’d watch them eat their cornflakes.

We became friends. All of them were very much into music. Rock and roll was the most important thing. The list of songs they were able to play was the largest of all the bands in Hamburg. They were so busy and eager, listening to the records again and again until they got it down. At this stage, all you could see is that they played those songs really well. They were a great rock and roll band, with three great voices. I didn’t know anything about them writing songs, that came much, much later.